Florida to be powered by wind turbines and solar panels. What could go wrong? 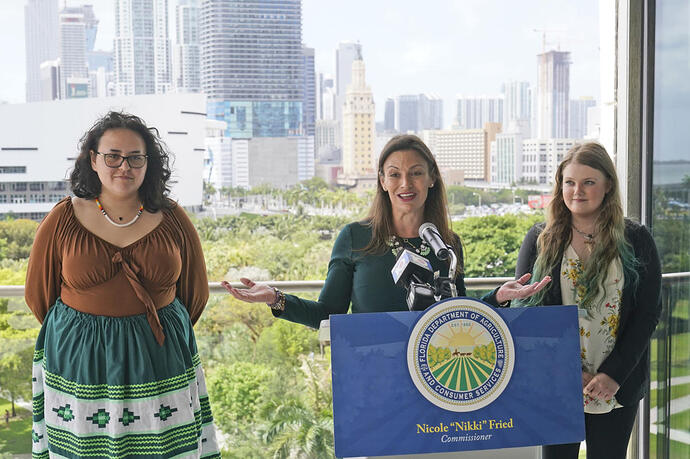 Florida utilities would gradually increase their electricity to 100% renewable by 2050 under a proposed rule unveiled Thursday by the state's agriculture commissioner. The proposed rule is an outgrowth of a lengthy court battle involving dozens of...

Perhaps they could also put large piles of pixie dust out in the open.

Perhaps they could also put large piles of pixie dust out in the open.

Maybe as part of a comprehensive settlement with Disney revoking of their self-governing status, Disney would make Tinker Bell available to provide the pixie dust.

More evidence U.S utilities need to be liquidated, and sold to people that depend on electricity produced.

Except for insiders that cashed out, who thinks this is a good idea?

We have already seen the modern application of Stalin’s dictum – It does not matter who votes; what matters is who counts the votes.

We just have to face facts – democracy has failed.

Everybody and their dog are claiming they are on clean energy. Take a company like Plug Power. They claim their hydrogen is produced by using hydroelectricity and of course the BTC miners are also using hydro as is every industry claiming the use clean energy. Most companies pay a higher price to make the claim. In short the claimed clean energy usage is probably 5 times or more the amount being produced.

Now the PUC is getting in on the act. I just read in MN the PUC will be going green. Shutting down nuclear and Nat Gas power plants. What happens when their is a shortfall you might wonder? No worries they will be buying power from the power plant in North Dakota which is coal fired and has a target on its back.

When the people you are talking to don’t know anything, you can just say shit. That is all you have to do. If the chickens come home to roost, what is the worst thing that can happen to you? You resign from the PUC. Oh my.

Everybody and their dog are claiming they are on clean energy.

Our local electric utility has turned this into a profitable racket. Customers can choose to pay three rates for their electricity, which I have linked to the pages showing the “sources” of the current you are buying [all PDF]:

Prices increase with the degree of virtue-signaling the customer chooses. 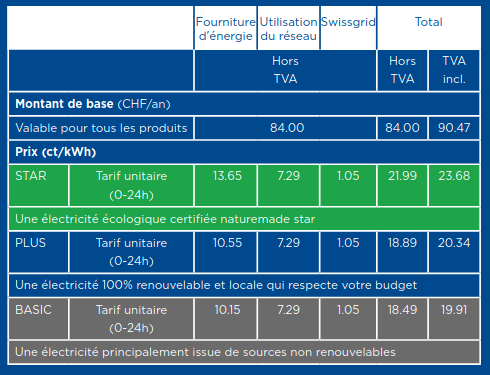 One can only imagine the complexity of the quantum-level switching circuits that guarantee each customer receives only electrons originating from the sources for which they’re paying in the selected plan.

But the Science says renewables are lower cost. Therefore, either Putin did it or the government regulated utilities are price gauging.

Well maybe they run the unclean energy through a filter making it clean which costs more until all sources of dirty energy disappear and we won’t have to filter the electricity.

Snopes can easily fact check that electricity can indeed be filtered.

One needs an account with Groupe-E to be allowed into the secret.

The sociology is interesting. Why pay extra for a commodity unless the customer gets to boast about it or do something to draw attention to her special status. Maybe those who pay the “Star” price automatically could have their house floodlit all night?

Oh how I wish there was a betting market on this item. 100 percent chance that even the dimwits will hit upon this idea and offer some visual signal that you are a good citizen. Special license plate for your e-car. A sign for your yard. Flood lights. Something.

Like I used to say back when I was single. I can’t drive a BMW into the bar so how will the girls know that I have one?

One needs an account with Groupe-E to be allowed into the secret.

Oops! I viewed these pages with a browser from which I had earlier logged into the Groupe E customer page (probably months before) which dropped a cookie that let me log in again without a password. When I tested the links, it was from the same browser so I didn’t notice the log in requirement.

Here are screen shots of the relevant parts of the pages. Click to enlarge the images. 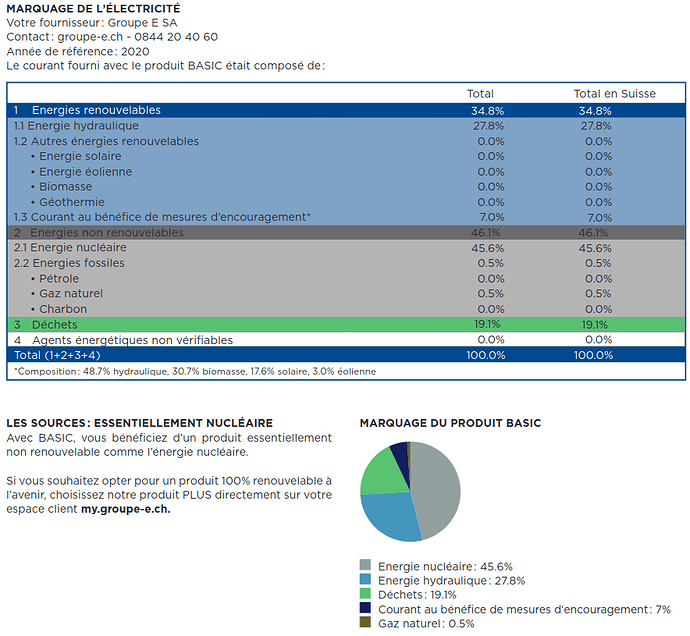 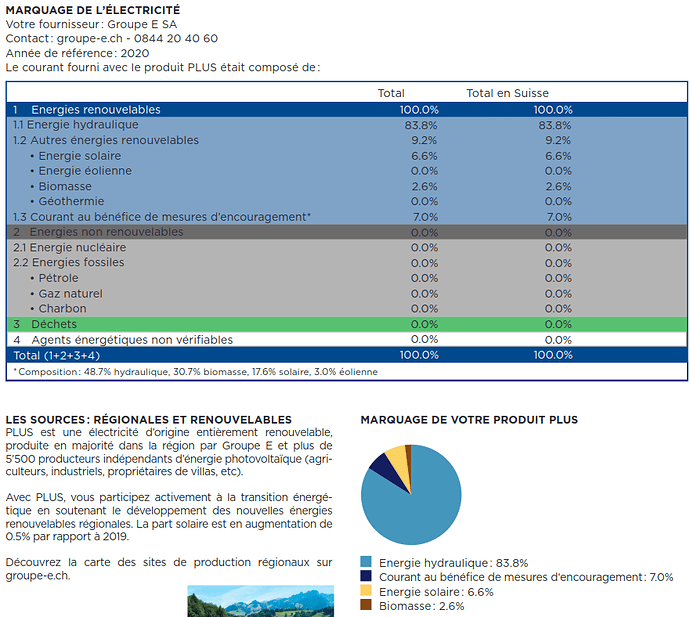 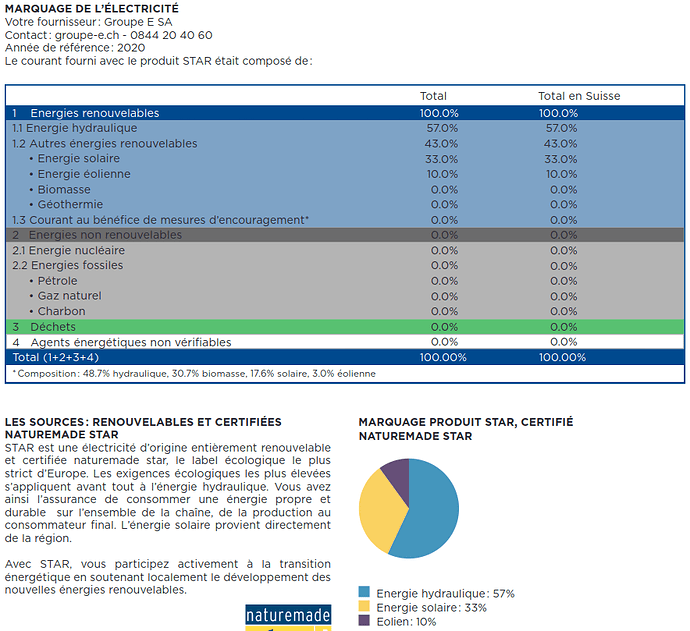 It is interesting that Swiss hoi polloi have to get by with “non-renewable” nuclear energy, whereas Swiss Stars use “renewable” solar energy – although both also use “renewable” hydro-electric power.

It is certainly fair to say that nuclear energy in the limit is non-renewable. People have estimated that if the entire population of the world was brought up to First World standards and used strictly power from nuclear fission, supplies of uranium & thorium might last for only a few millenia. That is possibly long enough for nuclear fusion to become viable … perhaps!

On the other hand, is hydro-electric power really “renewable”? We know that dams eventually fail, and that reservoirs behind dams gradually fill up with silt. A century might be a first guess at the average lifetime of a hydro-power installation. Sites for new hydro-electric dams are few and far between, although mountainous rainy Switzerland is certainly much better positioned than most other countries.

As for the assertion that solar power is “renewable” – that is currently an unproved hypothesis, and some would asset it to be a false hypothesis. We have yet to see a new solar panel constructed solely using solar power through the entire supply chain, from mining the raw materials, transporting them, building the factory, etc. Some would claim that it is impossible to make a solar panel without a hefty input of energy from “non-renewable” sources. And we do know that solar panels have a limited lifetime and need to be replaced after a decade or two.

People have estimated that if the entire population of the world was brought up to First World standards and used strictly power from nuclear fission, supplies of uranium & thorium might last for only a few millenia.

I am developing a post on this topic titled “Nuclear Fission Fuel is Inexhaustible”, based upon a 2006 paper by that name by five researchers presented at an IEEE conference. They observe that estimates of the availability of nuclear fuel typically assume thermal neutron reactors and the current price of uranium. But fast reactors, a technology more than 70 years old with reactors built in numerous countries, extract 100 times as much energy from natural uranium while producing far less high-level radioactive waste. Further, the cost of uranium is such a small component of the price of electricity from nuclear energy, that if it were to rise as high as the price of gold, it would still be effectively negligible. But at that price, the supply of uranium which was economical to mine would be many times greater than presently viable sources. For example, a current estimate of worldwide uranium reserves is 15,400 tonnes. But at the price of gold, another 20,000 tonnes is recoverable from phosphate deposits, potentially far more than that (plus thorium) from igneous rocks such as granite, and 4,400,000 tonnes from seawater. Without tapping seawater, supplies of uranium at the price of gold should suffice for global energy production at Western standard of living for at least 10,000 years.

I am developing a post on this topic titled “Nuclear Fission Fuel is Inexhaustible”, based upon a 2006 paper by that name by five researchers presented at an IEEE conference.

As background for that post, you may also be interested in an earlier paper – 1956, to be precise; a mere 66 years ago: “Nuclear Energy and the Fossil Fuels”, by M. King Hubbert, who was a geologist with Shell Oil.
Wayback Machine (archive.org)

Hubbert was not the first person to write about Peak Oil, nor the last. But he did make one of the best-known cases for the proposition that we would run out of coal, oil, and gas – albeit with a US rather than global perspective. The interesting feature is that almost half of his famous paper’s 57 pages focus on nuclear energy rather than on fossil fuels. Taking the long view, Hubbert concluded that: “… the discovery, exploitation, and exhaustion of the fossil fuels will be seen to be but an ephemeral event in the span of recorded history”.

Back in those halcyon days around the International Geophysical Year when the world looked forward to an exciting future, Hubbert was bullish about the benefits humanity would reap from nuclear energy:

“From these evidences it appears that there exist within minable depths in the United States rocks with uranium contents equivalent to 1000 barrels or more of oil per metric ton, whose total energy content is probably several hundred times that of all the fossil fuels combined. The same appears to be true of many other parts of the world. Consequently, the world appears to be on the threshold of an era which in terms of energy consumption will be at least an order of magnitude greater than that made possible by the fossil fuels.”