Fourmilab Chaos Butterfly for the Second Life virtual world has now been released and is available for free, with full permissions (copy/modify/transfer), from the Second Life Marketplace. Chaos Butterfly demonstrates the phenomenon of chaos in classical mechanics by implementing a Lorenz system, the mathematical model originally developed by Edward Lorenz in 1963 based on convection in the Earth’s atmosphere. As Lorenz studied the behaviour of his model, simulated on a rudimentary computer system, he discovered that even the slightest change in the starting point would result in an entirely different evolution of the system with time. This was the first discovery of the mathematical phenomenon of chaos and what has come to be called the “butterfly effect”: where the beating of the wings of a single butterfly in a jungle halfway around the world may result in the formation of a hurricane on the other.

Fourmilab Chaos Butterfly lets you create one or more butterflies which fly through the air in Second Life along the trajectories of the Lorenz model, demonstrating its chaotic behaviour. You can sit on a butterfly and experience the wild ride for yourself, with chat commands allowing you to set any of the parameters of the model and observe how they alter its behaviour. You can also wear the butterfly as an avatar accessory, which lets you fly with it in areas where you do not have permission to create objects.

The model is fully scriptable with commands supplied in notecards in its inventory and scripts may define pop-up menus through which an avatar may interact with the model. A collection of butterfly textures are included so you can distinguish multiple butterflies from one another or just choose one you find pleasing. A Deployer is included, which makes it easy to hatch as many butterflies as you wish, each of which will wheel and gyre through the sky of your simulation. A pre-built model and complete instructions are included for an experiment that demonstrates the sensitive dependence on initial conditions which is the essential characteristic of chaod.

For details, see the “Fourmilab Chaos Butterfly User Guide” which is provided as the help file with the model. Complete source code is available from the project’s GitHub repository.

For use in areas where you’re not allowed to create objects, the butterfly may be worn as an avatar accessory, allowing you to swoop above any territory in the chaotic Lorenz trajectory. 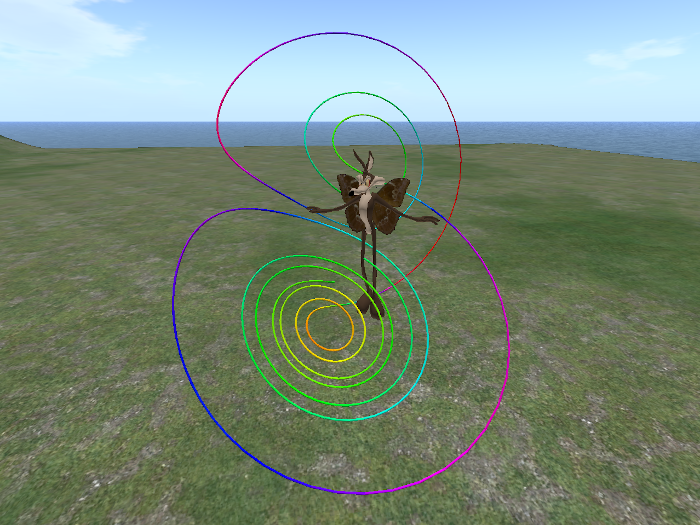 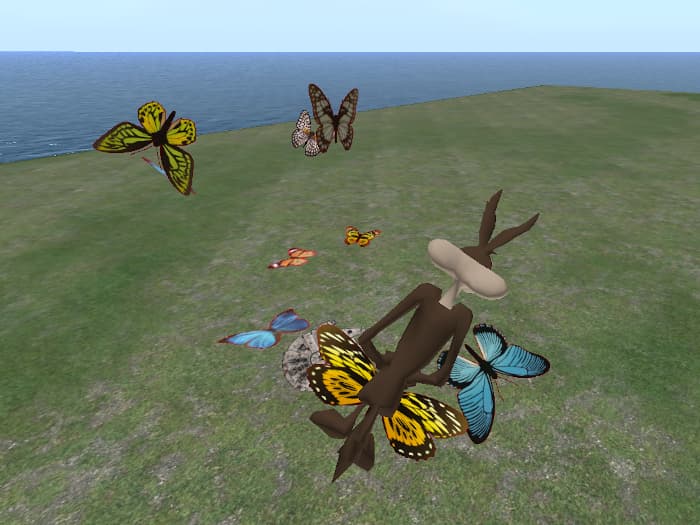 Wait—that’s not a butterfly!