From 1959—Vandenberg Aerospace Air Force Base 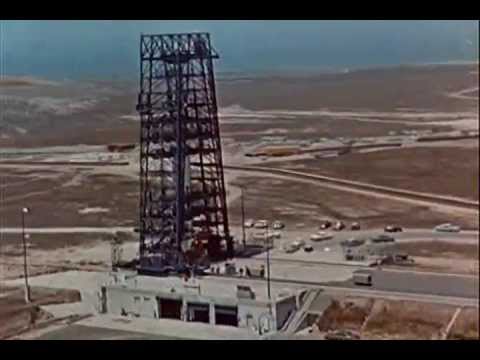 When Vandenberg was an on-alert Atlas missile base—with missiles vertical on pads, unfuelled, and exposed to the elements.

I know we have subs and cruise missiles. But still. A serious nation we are not.

I know we have subs and cruise missiles.

There’s also the B-2, of which some are nuclear-capable and able to carry up to 16 (I assume B-61) gravity bombs and the F-15 and F-16 which can also carry that bomb (only some aircraft are equipped with the arming mechanisms required for nuclear delivery).

But then there’s the question of what, other than deterring an attack, these costly and maintenance-intensive weapons are good for. If you can’t concieve of a scenario in which the U.S. would launch a thousand warhead plus salvo, then wouldn’t a couple of hundred warheads on submarines be enough to deter a madman? With what was saved on offensive systems, you could deploy a missile defence system which wasn’t a joke.

then wouldn’t a couple of hundred warheads on submarines be enough to deter a madman?

There is no way to deter a madman. A rational opponent, on the other hand, could be deterred by the threat of Mutual Assured Destruction. In the post-WWII era, and even more recently when all the Best & Brightest were mocking President Reagan’s missile defense plans as “Star Wars”, missile defense systems were not practical. Hence the reasonable reliance back then on MAD to deter an attack, with the resulting focus on having redundant methods to make sure the attack would get through.

But that was then and this is now. Should the calculus still be the same, favoring the capacity to launch an overwhelming attack? Or should a country which has thrown away so much of its manufacturing capacity it can no longer put a fighter jet in the air without using imported parts perhaps now rethink the very limited circumstances in which it should be prepared to use any kind of military force? Biden’s disastrous abandonment of Afghanistan should have got smart people thinking about the old wisdom of avoiding entangling alliances.