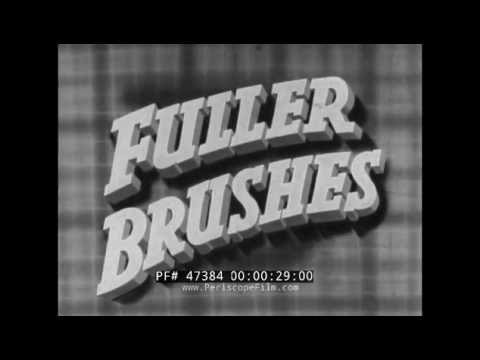 This film, dating from the 1940s, is introduced by Alfred C. Fuller, the original “Fuller brush man”, who founded the Fuller Brush Company in 1906. The company remained in family hands until 1968 and continued to sell exclusively door-to-door until 1985.

Imagine when it was profitable to mass-produce low-cost consumer products in Connecticut.

Imagine when it was profitable to mass-produce low-cost consumer products in Connecticut.

Rumor has it they also used to make firearms in Connecticut.

Wikpedia provides a list for people who were once Fuller Brush men.

Rumor has it they also used to make firearms in Connecticut.

I didn’t mention firearms because it’s (I believe) a much higher margin business. Fuller was assembling low-cost items made from bulk material, some of it imported.

Amazing all the limb severing deices that used to run rampant in manufacturing.

Just progress. “Technology” in its early stages, was crude; one should hardly expect the machines that built it to be refined. Refinement is a luxury of progress. This is akin to child labour laws, which Dems are very proud to have stopped. Once upon a time, kids’ efforts were important to the well-being of the family; today they at best constitute a drag.