Mercedes Lackey, a veteran author of fantasy novels, with more than 140 books published since beginning her career in 1985, was named the 2021 recipient of the Damon Knight Memorial Grand Master Award by the Science Fiction and Fantasy Writers of America (SFWA). The award recognises lifetime achievement, and previous winners include Robert Heinlein, Arthur C. Clarke, Ray Bradbury, Isaac Asimov, Frederick Pohl, Poul Anderson, Larry Niven, and Anne McCaffery. The award is presented at the Nebula Convention the following year, which ran from May 20–22, 2022 this year. Here is the announcement of the award, “Mercedes Lackey Named the 38th SFWA Damon Knight Memorial Grand Master”.

On 2022-05-22, the last day of the conference, the SFWA board of directors issued this “Statement on Removal of Mercedes Lackey from the Nebula Conference” via E-mail to its members and Nebula Conference attendees:

We learned yesterday that while participating in the “Romancing Sci-Fi & Fantasy” panel, Mercedes Lackey used a racial slur. First, we apologize to our attendees and the other panelists who were subjected to that slur. We’ve disabled access to the panel to avoid any additional harm being caused.

Second, we are immediately removing Mercedes Lackey from the conference and the additional panels she was scheduled for, in accordance with SFWA’s Moderation Policy. The use of a racial slur violates the instruction to “Respect all cultures and communities. Do not make derogatory or offensive statements even as a joke.” That applies to everyone in a SFWA space, at all levels of their career.

Third, we will be discussing with the other panelists for “Romancing Sci-Fi & Fantasy” how they would prefer we proceed when they are able and comfortable in doing so. We will be offering to edit out the offensive portion of the panel or hold the panel again at a later date, inviting back the other three panelists and moderator to again take part. We will respect their wishes on how to handle this issue while also sharing the invaluable expertise they offered during the discussion.

Thank you to our conference attendees and panelists who reported the use of the slur. We appreciate being alerted to it right away, so we could investigate and come to this decision as swiftly as possible.

What was the “racial slur” which caused the SFWA to eject the person to whom it had just awarded its Grand Master honour?

“Colored ladies,” was what my aunts Bessie and Sadie referred to themselves as, and I favored “black” (with a small B, because because of my experiences in '68, with the activists who changed the country from “Negro” to Dr. Du Bois’s preferred term). Among colored or black or Negro folks he had no problem—since scientifically there is no such thing as race, the terms are all social constructs. With all due respect for anyone over 60, there are no “bad words;” it depends alone on the vernacular you were brought up with. (Prescriptive usage and grammar starts out as a lost cause.) I would like to see institutions leave their hands off the spoken language of their elders. At 8 years my junior, and a native of a city I am very fond of, Mercedes Lackey has my permission to speak of me in any way she chooses. “Person of color” is just awkward (so I wouldn’t use it myself); my paternal grandfather was born a slave, and there were white mongrels and Native Americans scattered throughout; “colored” has no negative connotations among any speakers black or white in my family and never had.

The SFWA has for years been a type specimen of an organisation infiltrated by social justice warriors who then eject any dissidents from their ideology and redirect the once-respectable and useful institution toward deconstruction of what it once promoted. Or, as David Burge famously said in 2015,

All the best of Bolshevism and Maoism rolled into one.

When talking about these people who are ruining Science Fiction, is it OK to say “stupid Directors” or do we have to say “Directors of stupidity”?

I have a hobby of sorts - playing with words; I particularly like comparative adjectives - opposites on the same spectrum. Consistency requires I be referred to as “of white”. The hobby includes coming up with alternatives. Instead, how about “of whiteness”, “of melanin-deficiency” or “melanin deprived”.

SJW’s deploy words rather like land mines. Maybe a year or so ago, one might have safely abstained from using pronouns. Now it is deemed insufficient to refer to an individual politely by name. No, no. Laws and regulations have actually been passed (students expelled and academic careers ruined) compelling speech - requiring use of whatever pronouns some troubled individual demands, no matter how bizarre. Simple respect, using whatever proper name an individual goes by, has been deemed “misgendering” (a neologism and neo-felony) and in extreme cases “sexual harassment”! Who would have thought pronouns would become fighting words?

Stated that way, perhaps we should start fights over words. Once upon a time there was a legal concept of “fighting words”. Perhaps we should return to that, claiming stupid use of BS “pronouns” is “fightin’ words” because it SO inflames us and our sense of logic and order we can’t help it.

Just recently somewhere I read that the Left, after a prolonged siege of rioting, looting, arson,deception, and scurrilous insult against the rest of America, is falling back on “good manners”, “simple politeness”, “common decency”, and other hackneyed two-word clichés, when it comes to pronouns.
How rude, how gauche, how inconsiderate if you won’t even refer to someone the way “they” prefer.
All of a sudden they’ve unclenched those big bloody-knuckled fists and they’ve got their pinkies stickin’ out.
It would be funny, it SHOULD be funny but most of us are too cowed, too “nice”, too damned mannerly, to emit the snorting guffaw it deserves. 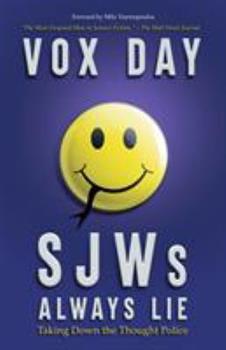 Buy a cheap copy of SJWs Always Lie: Taking Down the Thought... book by Vox Day. Free Shipping on all orders over $15.

How rude, how gauche, how inconsiderate if you won’t even refer to someone the way “they” prefer

How pretentious, arrogant and self centered for someone to demand how others should address them.

In my early career there was a phase where the PHDs wanted people to refer to them as Doctor xyz. Now a PHD in Physics or such is no made up accomplishment. At the time the culture valued business accomplishment not credentials so a good amount of people started adding doctor to everyone regardless of degree.