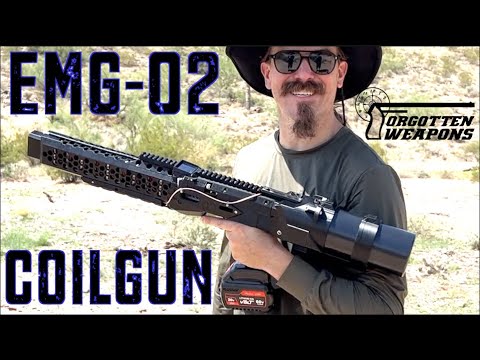 Arcflash Labs has announced their EMG-02 (Electro-Magnetic Gun 2), a hand-held weapon that fires magnetic projectiles which can be between 6 and 8 mm in diameter and 19 to 22 mm in length. A standard power tool battery supplies sufficient charge for around 300 shots and can be swapped in seconds. Magazines hold 15 or 18 shots and can be quickly changed.

A single capacitor is discharged through 8 accelerator magnets and two booster magnets under computer control. Muzzle velocity and energy are anemic compared to almost any firearm. Maximum muzzle velocity is 75 metres per second, comparable to a BB gun, and muzzle energy tops out at 20 joules, which is in the range of pellet airguns. The .22 short rimfire cartridge, the least powerful commonly encountered firearm round, has, depending on loading, a muzzle velocity between 250 and 355 metres/sec and muzzle energy between 80 and 118 joules.

This is a product right out of the pages of science fiction, but with the present state of the art in battery energy density and portable pulsed power systems, it is basically an expensive (US$ 2515.50), not very accurate, plinking gun.

The EMG-02 is not considered a firearm under U.S. federal regulations and can be purchased, even though offering full automatic fire, without firearms dealer formalities. Ir is restricted under some state and city ordinances and cannot be shipped into those benighted territories.