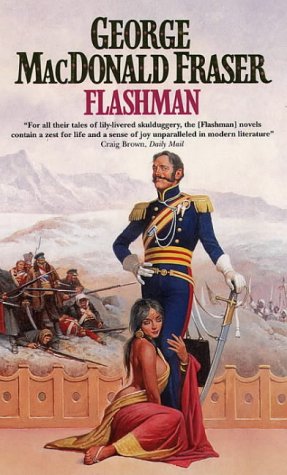 According to canon, Sir Harry Paget Flashman VC, KCB, KCIE was born on 1822-05-05, two hundred years ago today. The (anti-)hero of twelve novels published between 1969 and 2005 by George MacDonald Fraser, Flashman was an “illustrious Victorian soldier” and “a scoundrel, a liar, a cheat, a thief, a coward—and, oh yes, a toady.” His adventures, set in British army engagements around the Empire and through the 19th century, related in first-person memoirs said to have been discovered after his death in 1915, recount his behaviour with utter candour, with a combination of luck and animal cunning ultimately leading to his being proclaimed a hero after each episode. Flashman describes his natural talents as “horsemanship, facility with foreign languages, and fornication”, but he is a shrewd observer of his fellow man (and women) and has an instinct for getting what he wants with minimal risk and exertion.

Flashman has come to the big screen only once, in 1975’s Royal Flash, starring Malcolm McDowell. Here is the original trailer.

This clip from the movie shows how Flashman came to be proclaimed the hero of Kabul.

Marking the anniversary, Aris Roussinos writes at UnHerd, “What Harry Flashman teaches us about empire”:

Of Afghanistan, he observes, like many an editorial last summer, that “possibly there has been a greater shambles in the history of warfare than our withdrawal from Kabul; probably there has not. Even now, after a lifetime of consideration, I am at a loss for words to describe the superhuman stupidity, the truly monumental incompetence, and the bland blindness to reason” of Britain’s ignominious retreat, product of a Victorian bubble where “those who studied the country only from the cantonment at Kabul knew no more about it than you would learn about a strange house if you stayed in one room of it all the time”. Flashman’s world is not, after all, so very distant from our own.

It is odd that the 2000s world of his memoirs seems further from us today than Flashman’s world did to him — many of his observations, commonplace then, would now be considered hate speech — and yet Flashman’s world of imperial misadventure still seems resonant, and strangely current. Like Flashman and his creator, we are trapped as unwilling protagonists in history, whose endless rhymes and recurrences cannot be escaped.