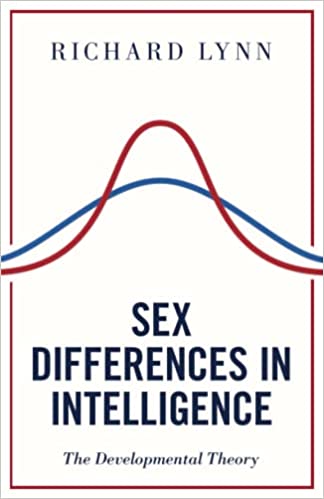 From the description at Amazon:

In Sex Differences in Intelligence, Dr Richard Lynn refutes the belief that males and females are equally smart. He presents the findings of his extensive research showing that, on the contrary, the average intelligence of young girls is higher than that of young boys. It is only in school-age students that boys and girls have approximately the same intelligence, while in adults the average intelligence of men is four IQ points higher than that of women. Lynn supports his Developmental Theory with a review of well over a hundred studies conducted by himself and a host of other reputable scientists.

The book discusses the reasons for the higher average intelligence of men among adults. One of these is that men have a larger average brain size than women. He refutes the contention of some feminists that brain size has no relation to intelligence. He argues that men have evolved higher average intelligence than that of women because this enhances their ability, in competition with other men for territory or status, to obtain women and thus pass on their genes. Another evolutionary explanation for men having a higher IQ lies in sexual selection such that females normally prefer to accept males with high intelligence as mates because they view them as potentially better providers for themselves and their children.

This path-breaking book will revolutionise the understanding of sex differences in intelligence.

The Kindle edition is available for free to Kindle Unlimited subscribers.

Does, logic vs emotion play into this ?

Also when men decide women should run everything (idiocracy) the IQ curve has probably flattened considerably .

There are so many books worth reading! So much to learn, so little time! Another one hits the list.

Perhaps another factor lies in the changing nature of education. Not so long ago, males & females were educated separately. With the dominance of co-education and the rise of aggressive Feminism, classrooms are now tailored to female learning practices, and young males have to be sedated to control normal young male behavior (aka ADHD). Thus, it may not be surprising that male intelligence is slow to develop in an educational system which is not a good fit for them.

I wrote at length on our first shared forum (the happy highways where I went and cannot go again, pace Housman) about my voracious adolescent reading habits which of course included The Ladies’ Home Journal and Good Housekeeping. Because they were around. Oh and also of course The Readers’ Digest! But the point I was making is, the “humor” features of all such rags devoted a lot of time to “The Battle of the Sexes”— and it was reliably HILARIOUS! (I mean, well, okay, maybe I was a tad under-stimulated in the entertainment dep’t, but even so…) My point is everybody used to KNOW how different men and women are. That was just like—the weather, or sump’n. It was funny just because it WAS predictable : I remember one cartoon feature called “They’ll do it Every Time!” Yeah! Hee Hee, and it never gets old…well, it does, but old is funny too!
I know, okay, these were stereotypes which such creations were perpetuating. But as some standup comic once pointed out: stereotypes are TRUE, they hafta be, or nobody would believe them.
Even before entering THIS august scientific forum, ( thanks again JW!) I knew lotsa men who are smarter than…I. I also know many who are dumber. My BMD is so much smarter than I am but he can’t do some of the mental feats I can perform. Neither of us is broken up about the other having obviously superior skills in certain areas.
All this just by way of saying, no surprise or outrage about Dr, Lynn’s conclusions from this quarter. (And I hope that won’t disappoint you, dear gents!)

As regards development and shifts with age, I have long heard that girls and boys perform about equally in mathematics until around the time of adolescence, when boys pull ahead in the more difficult and abstract areas. This has been attributed to expectations and social conditioning, but there may be some difference which is triggered at this age.

It is striking that in its history since 1936, there has only been one female recipient of the Fields Medal, considered the equivalent of the Nobel Prize for mathematics.

I think this is normal, but it is not communicated to the young.

A week ago I was driving home from the grocery store with my wife. The new snow was a foot deep. As I turned into our neighborhood, there was a Dodge Charger stuck at the intersection. My wife asked if I was going to help.

We have a family story that is often told. My brother and his wife hosted a Christmas party 30 years ago. My sister in law was starting to clean up the table. My dad asked if she needed any help. She said that would be nice. My dad told my mom to help. Laughter all around on the stereotypical male thinking woman belong in the kitchen.

What is the difference between these two stories? My mom expected my dad to help when it fell into his area. My wife expects me to help when it falls into my area. Just like my dad could do dishes, my wife or my mother could shovel or push.

If constantly told that you are being somehow mistreated, you see it in any and every situation.

I think feminism harmed society, but it harmed women even more in so many ways. Maybe the biggest is tricking them into not having a fulfilling life.

A large percentage of woman, doing as they have been convinced, are postponing relationships and marriage. They think that their clock isn’t ticking. It is. Every year a woman postpones finding a husband, the smaller the pool of candidates. They are less attractive and they are less able to have a family. A man that is forty and is exceeding financially can find a younger woman and start a family.

I am fascinated when I watch Kevin Samuals. He has a YouTube channel. He takes callers. Mostly black woman in their late twenties. It is repetitive. How old are you? 30. Are you in a relationship? No. Do you want to get married some day? Yes. Do you want kids? Yes. How many? 2. Why aren’t you in a relationship? I am working on my career. When will you get into a relationship? Hmmm. What type of man are you looking for? Nice, good job, etc. Will you date a man that works at McDonalds? No. Eventually he gets that they want a man that makes 100 to 150k minimum. Usually they prefer black men. He will then make several points that hinder their plan. Their aren’t that many men making that kind of money. If they do they have choices. Why would they choose you? What do you bring to the party? I have a degree in xyz. Or better yet they say I have PHD for which he has a sound bite. He tells them the truth. The men you want don’t care about your degree or how much money you make. If I ask them if they would date a woman working at McDonalds, they say what does she look like.

He exposes the lies these young woman have been told. He does it without pulling any punches. The idea that a high income earning man that would prefer to do dishes, cook, work, clean, do laundry just to be married to a woman that has a career is beyond belief.

If a woman wants a career, a family and only do their fair share of the dishes, they better also accept men that work jobs that have less choice. It is highly probable that they will not be making big bucks.

There are two people in the relationship. Best to consider what the other person wants and what you really want.

A large percentage of woman, doing as they have been convinced, are postponing relationships and marriage. They think that their clock isn’t ticking. It is.

Maybe their behavior has something to do with social pressures rather than intelligence?

This may be drifting a little from the topic of intelligence, but we are here now so let me plunge on regardless. Mark Steyn has the striking phrase “The future belongs to those who show up” – which is significant in a Western world in which too many women are falling short on delivering the 2.1 children necessary to maintain civilization. Especially for intelligent educated professional women, the clash between career and family too often seems to turn into a lose/lose proposition. What could be done?

In some Arab countries, the solution seems to be that the smart girl graduates from high school at 18, gets married, has several children, then returns to the educational system (often including a degree from a foreign university), and enters the work force at a somewhat older age. Of course, this is much easier to do in a wealthy society with strong local extended family support and a plentiful supply of cheap Filipina maids. We will have to wait and see if there are any long term impacts on the next generation of Arabs from having such a large share of their upbringing under the care of expats from the Philippines.

Perhaps in the West we could start by restoring the role of women as mothers to its central place in any successful society, and making adjustments to accommodate the consequences of many women then choosing to enter the work force at an older age.

Ideally everybody would have babies at sixteen to 18. Then when the kids start formal education the moms can work or study. The idea that women that age are too young to copulate and reproduce is truly a culture-killer.

Actually, everybody KNOWS they aren’t too young to couple and bear, but for some perverse reason everybody is horrified by the thought of marriage at that age.

It makes no sense. The younger and less propertied you are, the easier to undo a marriage if you want to. Three months in Pa. It’s only for more established, wealthier people that getting married is a momentous step which will land you in a thicket of economic and social entanglements.

Yet in my experience, when a young girl gets pregnant, marriage is the LAST thing on anybody’s minds. Perverse.

This is what the book’s cover is illustrating.

That is a charitable interpretation of what is probably a cover put together by an intern with an advanced degree in anything but statistics.

Per the Amazon blurb, the two lines should be displaced, rather than having the same mean.

Noticeably, the Amazon blurb did not mention the relative widths of the distributions – but it was probably also written by a statistically-deprived intern.

Maybe I am taking this whole thing too seriously.