Two weeks ago today, on 2022-11-22, I had a total replacement operation of my right hip. This was more than overdue. Here is a “before” X-ray (click to enlarge) which shows the wreckage of both hip joints.

This image was taken with me lying on my back, with the X-rays projected from top to bottom. Hence, the joint that appears at the left of the image is the right hip joint and vice versa. What is immediately apparent is that the head of the femur (thigh bone), which forms the ball of the ball and socket hip joint (the socket is called the acetabulum of the pelvic bone) is basically gone, leaving the neck of the femur to grind against what was left of the socket. This was extremely painful, and progressed to the point that I could not stand or walk more than about 90 seconds before it became unbearable.

Hip replacement surgery removes the head and neck of the femur and replaces them with an anchor spike that is driven into the core of the long bone, supporting a replacement femur head. These are manufactured from titanium, with surfaces intended to bond to existing bone coated with hydroxyapatite, the mineral that makes up around 70% of natural bone by mass.

The socket (acetabulum) is reamed out with what amounts to a giant Dremel tool, and a coated titanium replacement socket implanted. A ceramic bearing surface is installed in the socket, which mates to the ball on the replacement femur head. Here is an X-ray of the prosthetic joint after installation. 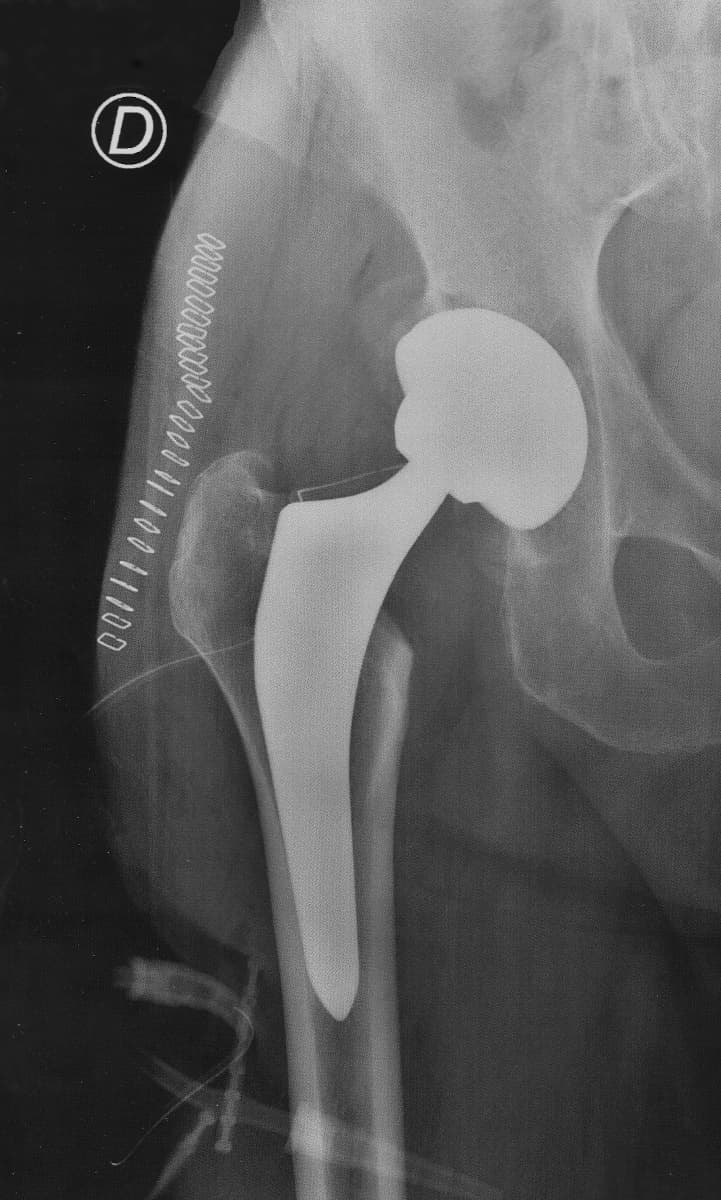 This is a “non-cemented” prosthesis, which depends upon the natural bone bonding to the hydroxyapatite-coated parts to secure them in place. The orthopedic surgeon believes this produces a stronger and longer-lasting bond than the cemented alternatives or earlier techniques which secured the socket to the pelvis with screws. The rectangular objects at the upper left are the surgical staples used to close the incision; they are scheduled to be removed three weeks after the operation.

The operation was done using the “minimally invasive anterior approach”. This avoids cutting muscles which usually results in a longer recovery time requiring more physical therapy. The total surgery, which was performed under general anæthesia with propofol (and possibly other agents), took about 90 minutes, and afterward I woke up instantly with no pain. There was no numbness or inability to move my lower extremities, and I was able to walk the next day with the aid of two cane/crutches.

Here is a short video which explains the minimally-invasive anterior approach. The narration is in French, with English subtitles, which I have attempted to enable to show automatically. YouTube subtitle requests are notoriously flaky, so if they don’t appear for you, click the “Gear” link at the bottom right and enable the subtitles manually, or click the “YouTube” link to open a separate player where you can turn them on. I chose this video because it provides the clearest description I’ve seen of the operation in just four minutes. 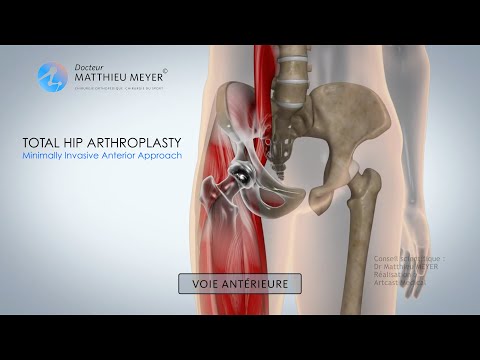 Here is a video of an actual hip replacement performed using this technique. This is rather gnarly and squeamish viewers should probably give it a pass. The video is “age restricted” by YouTube and cannot be embedded here; click link to view.

Here is the guide (in French) to recuperation after a hip replacement by this technique. The anti-inflammatory “Irfen” is 400 mg ibuprofen, while the analgesic “Dafalgan” is 1g paracetamol. The anti-coagulant “Xarelto” is 10 mg rivaroxaban, taken for 30 days after the operation to reduce the risk of thrombosis. No other pain medication was administered or prescribed after the operation. 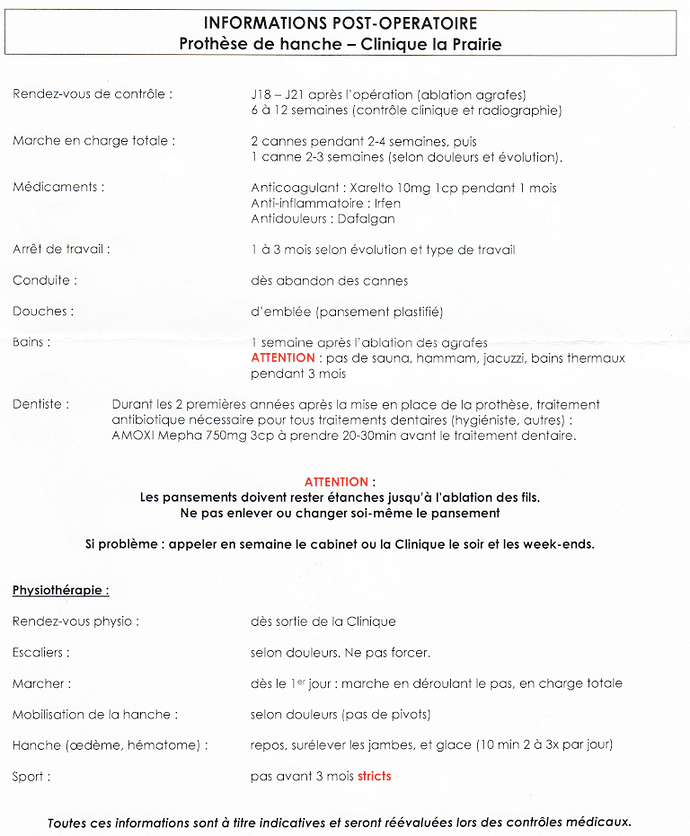 Perhaps less apparent from the X-ray at the top, the left hip joint (rightmost in the image) is also a wreck. It started to fail in September 2014, and after an acute phase stabilised as something I’ve been able to live with since then. The plan is that if recovery from the right replacement proceeds as hoped, that one will be replaced in early 2023.

That is one remarkably arthritic right hip! When the anesthesiologist can read the X-ray, you know is is really bad.

Thank you for the report!

Best of luck with physical therapy and restoration of function. May your present and future bionics keep rockin’.

Best of luck with physical therapy and restoration of function.

Actually, with the anterior approach, as long as you’re able to master walking with two crutches before leaving the clinic, there’s no need for physical therapy. They give you a prescription for it if you want to charge it to your insurance, but the surgeon said “There’s nothing it can do for you other than just walking regularly”.

This is very different from the posterior approach surgery where they cut large muscles and tendons and the healing time is longer and to some extent you needed to re-learn to walk.

Two weeks after the operation, today I collected and took out the trash today (which is about 300 metres up and down a curving driveway) with just one crutch and using the wheelie-bin as a walker.

I don’t want to push too hard when the joint and iliofemoral ligament are fragile (don’t fall!), but so far this is a faster and less painful process than I expected.

That’s great news. I am glad you are enjoying the benefit of all those surgeons working on all those Davos ski accident victims for the past few decades and continuing.

OK, so as things continue to improve, as everybody hopes and trusts they will, just remember to keep paying attention when walking around with only a trash bin for company. We are all sure that you already have somebody telling you this; this is merely to lend support to that voice.

Hip surgery has gotten a lot better. When I started in EMS around 1999 it was pretty common to see somebody break a hip (getting bumped at church was a common cause), end up in the nursing home, and die shortly afterwards. Towards the end of my career I picked up a 100 year old lady, living in her house alone, that tripped and fell breaking her hip. She told me it was no big deal, she’d be back home in a few months just like when she broke the other hip a few years earlier. Today you can get one replaced without pain meds and even any PT

How did you make it back without the wheely-bin? Hoping you continue to do well

How did you make it back without the wheelie-bin?

Silly engineer trick—on the way from the house to the road side, I put the second crutch in the wheelie-bin, next to the garbage bag. When I reached the destination, I took it out and used the two crutches for the return trip. For bringing it back today, I reversed the process.

There is an interesting lesson here. Here in the US, no crutches are required post op. After each of her two hip replacements, my wife was told she could walk unassisted as soon as she felt steady enough to do without her walker. That was about 2 days post op each time.

This leads me to wonder about California. Physicians may lose licenses there, now, for spreading “misinformation” or “disinformation”. So, if one institution requires crutches post hip replacement and one does not, who gets punished? This is an example of the absurdity of this CA law, as much of medical progress actually depends upon free and open discussion among practitioners - much of it being disagreement. Think crowdsourcing of find best practices.

Here in the US, no crutches are required post op.

The sense I get is that the main reason for the crutches is to prevent a fall, with the messy consequences of a probable dislocation. I have been able to walk since the day after the operation, but gaining confidence I was not going to fall, particularly negotiating stairs without the aid of a handrail, was slow in coming. Part of this is having lived since 2014 for one hip and six months for the other with a feeling the leg might “let go” at any random time. That doesn’t make for confidence walking. From what I’ve read, most post-replacement dislocations occur in the first three months before the muscles and ligaments recover and adapt, and that is consistent with the recommendation for use of crutches/canes.

I also got the impression that the multiple orthopedic surgeons who practice at the clinic differ on recovery recommendations. The page I included in the original post was specific to the surgeon who operated on me, who described his approach as “old school”, preferring his patients “just walk” as opposed to physiotherapy, and avoiding a sense of fragility in the replaced joint.

@johnwalker How is your recovery going?

How is your recovery going?

Coming up on 8 weeks after the surgery (next Tuesday), I am essentially at 100% on the operated hip. I have been getting around without crutches or cane for almost a month. I remain cautious with stairs, uneven footing, and especially snow and ice (which have been, thankfully, rare this winter), but I have no trouble walking, driving, or doing anything else except as constrained by the other hip, which has been slowly going downhill since 2014. It generally takes around 12 weeks for the iliofemoral ligament, into which an opening is cut to provide access to the hip joint and sutured at the end of the operation, to completely heal and regain most of its strength, and until it does there is a heightened risk of dislocation in the case of over-extension (such as a sharp bend at the hip) or especially a fall. Most post-hip replacement dislocations occur in the first six weeks, but you can’t be too careful.

Last Thursday, 2023-01-12, I went in for the final post-operative X-ray and consultation. Here are the X-rays, which were summarised as “completely normal”. 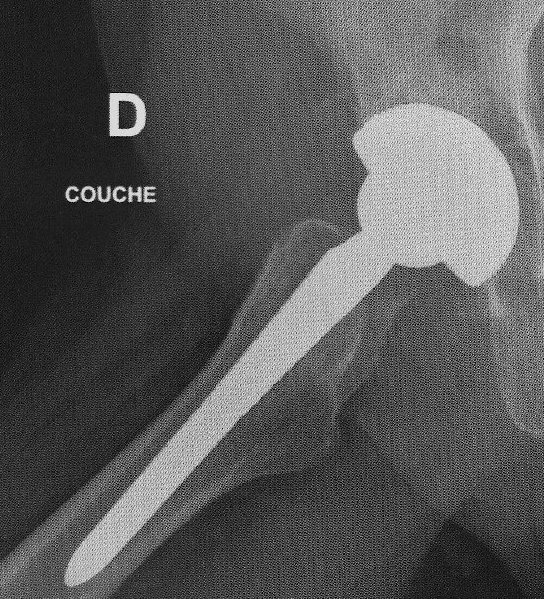 The second X-ray was taken at an angle to show the femur aligned linearly with the socket joint (acetabulum) prosthesis in the hip.

The second operation to replace the left hip is scheduled for 2023-01-31. This, of course, resets the recuperation clock, with the right leg now being the “good one”.

Well, okay then. With a good report like that, a person doesn’t even need ice cream on the way home! However, I hope you got ice cream anyway. 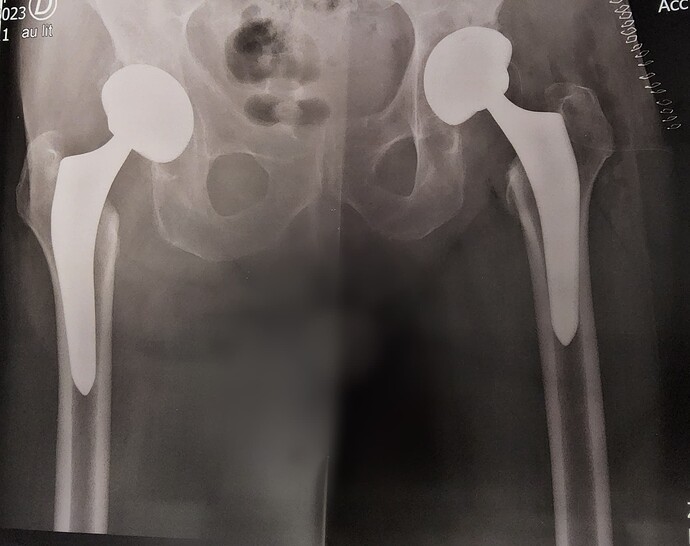 The left hip was replaced today, 2023-01-31. In this X-ray it’s the one on the right—note the surgical staples closing the incision. The perspective is deceptive: I was positioned with the right hip somewhat elevated to obtain the desired angle on the left.

Note how, compared to the immediate post-operative X-ray of the right on 2022-11-22, the femur bone has filled in, connecting to the spike of the prosthesis. On the new left side you don’t see this. 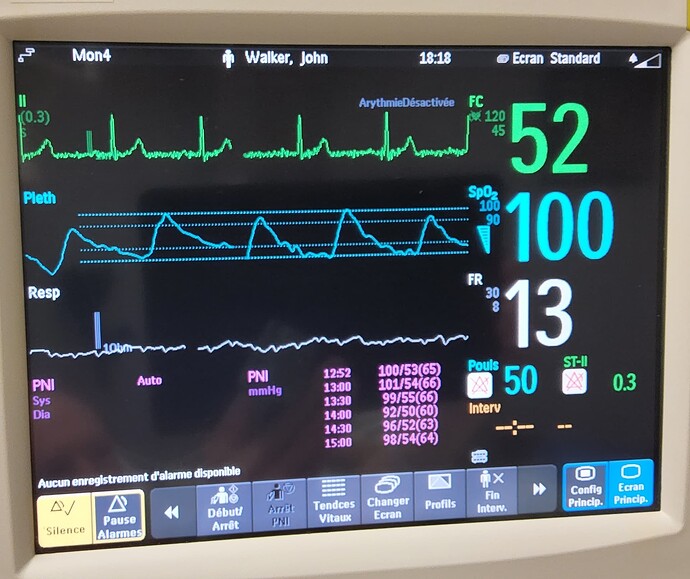 From my standpoint everything went smoothly and, so far, so good. The surgeon said that, despite appearances from the original X-ray, this one was more difficult and messy than the right and took 90 minutes as opposed to 60 the last time.

Wishing you a rapid and total recovery. Then you will be able to get that trash can down the driveway while whistling a happy tune.