Hot or Not? — Independent Climate Science

Creon Levit, a 32 year veteran of NASA and now director of R&D at Earth observation satellite swarm operator Planet Labs, recently decided to do his own independent assessment of long term climate change using raw data collected directly from thermometers installed in airports around the world. The results are now published in “Hot or Not? Visualizing temperatures around the world over the last 75–100 years” and are well worth perusing.

I wanted to find long-term temperature records. From thermometers. Not from proxies (tree rings, ice cores, etc). It turns out thermometers are not that hard to make, and they have been around for a while.

The data source I focused on is the “Automated Surface Observation System” (ASOS). It is a worldwide database of (approximately) hourly temperature data from airports. Many hundreds of airports. Some of the airports’ data series are only a few years old, but some have been recorded since the dawn of commercial aviation - since the 1920s.

(ASOS records hourly temperature, wind speed, and humidity - which is what pilots need to know to decide whether they can take off or not. I just looked at temperature).

I focused on the “longest duration” ASOS timeseries: 75, 85, or more years old.

The results are from all over the world. Here is Kelly, Texas, for which more than 80 years of data are available. The top left chart is hourly data for 2020 as a reality check. You can see daily and seasonal variation of temperature. Bottom left is the entire data series of hourly measurements. Top right summarises the hourly data in three year bins, showing medians, quartiles, and extrema. Finally, the bottom right plots the medians with a linear least squares fit to the points.

Here is Murmansk, Russia, where the arctic climate is expected to show pronounced warming. In the southern hemisphere, here is a site in Australia. We’ve all heard how India is suffering from climate change. Well, let’s see. When I look, I see two big things: 1) The annual extremes at each location span a much larger range of temperatures than any slow wandering of the median temperatures over almost a century. And 2) the series of medians (and the minima and maxima) look pretty close to random walks.

Do these data confirm the existence of a climate crisis? A “planetary emergency”? An existential threat to human civilization, the human race, or the biosphere? Let me know what you think.

(1) Global warming?
Well, it depends how long your measurements go in the past: 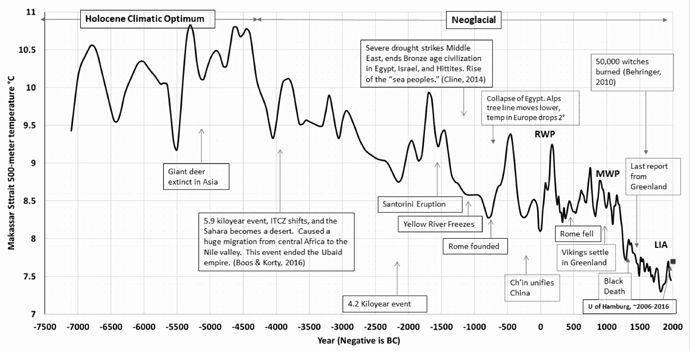 (2) Vital urgency for mankind?
Mankind is 40.000 years old, and if you check the chart above you will see that our specie(s) have survived much (much) higher temperature rises - in fact, on the long term, we have never seen anything so cold taking place in the past.

(3) Global Warming caused by mankind?
Maybe in a so insignificant part that it visibly did not reverse the millenias-old trend.

(4) So why all this panic in the media and universities?
Bankers decide how much money to create, who will get it, to do what.
For the best or the worse, they are responsible for everything taking place on our Planet.
But they insist to tell us that we should breath less because it generates CO2 (supposely generating global warming) while… CO2 is routinely injected in closed-space farming to accelerate plants growth and resilience. CO2 (not fertilizers) explain harvest rises for the past century (see chart) so the only reason to industrially limit CO2 production (plants to catch CO2 have been financed!) is to limit the productivity of farmer (to create famines again, like in 1789?). 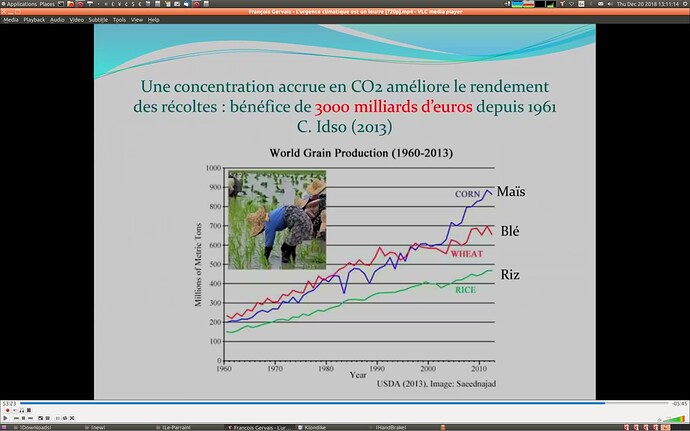 (5) Why all these lies?
Because, for a long time, selling as much as possible OIL was the basis of the U.S. Petro-Dollar (which in turn allowed the USA to enjoy what De Gaulle called an “exorbitant privilege”, the ability to print money indefinitely despite chronic deficits because the rest of the world had to buy USDs to buy OIL - which is required to have a working economy, or simply decent life standards).
Today, they want emerging countries (like India) and challengers (like China) to be financially sanctioned if they consume OIL - hence today’s “zero-emissions” craziness. 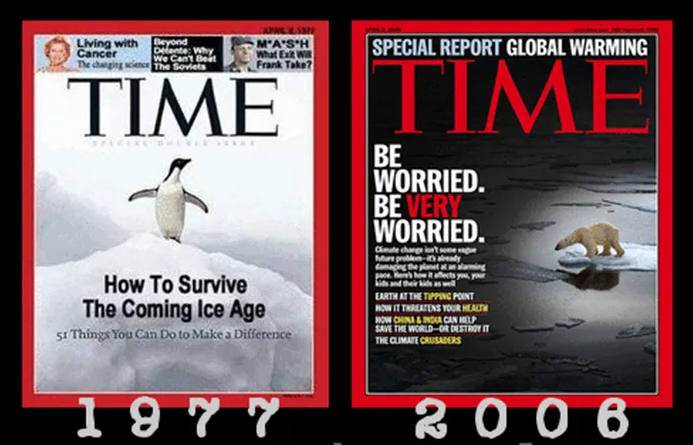 “Bankers dominate both business and government because they have the ability to supply or refuse to supply the capital required to anyone. Controlling the money supply allows manipulators to create alternate cycles of boom and bust, scarcity and abundance, at will, hereby controlling the world economy.”
-John Coleman, “Conspirators’ Hierarchy: The Story of the Committee of 300”