How Groundwater Interacts with Dams and Buried Structures

It’s worth noting that one of the worst disasters in Italy was not a failure of the dam, but of correctly understanding how the groundwater could affect the terrain behind the dam: 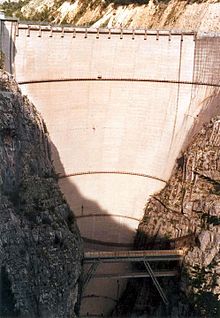 The Vajont Dam (or Vaiont Dam) is a disused dam in northern Italy. It is one of the tallest dams in the world, with a height of 262 m (860 feet). It is in the valley of the Vajont River under Monte Toc, in the municipality of Erto e Casso, 100 kilometres (62 mi) north of Venice. The dam was conceived in the 1920s and eventually built between 1957 and 1960 by Società Adriatica di Elettricità (SADE), at the time the electricity supply and distribution monopoly in northeastern Italy. The engineer...

On 9 October 1963, during initial filling, a landslide caused a megatsunami in the lake in which 50 million cubic metres of water overtopped the dam in a wave of 250 metres (820 ft), which brought massive flooding and destruction to the Piave Valley below, leading to the destruction of several villages and towns, causing between 1,900 and 2,500 estimated deaths. The dam remained almost intact and two thirds of the water was retained behind it