Hyperbolica, an eagerly-awaited computer adventure and puzzle game set in a world with hyperbolic geometry, is now available on Steam. The game currently runs on SteamOS/Linux and legacy proprietary Windows platforms (MacOS support is promised “real soon now”), and has modest computer and graphics processor requirements for a contemporary game. Here is the official announcement video.

This is the trailer, released one month before the shipment date.

Here is a quick look at the world and game play.

One model of hyperbolic space is the Poincaré disc, in which lengths scale with distance from the centre such that an infinite amount of detail can exist within a finite radius. M. C. Escher was particularly fond of such geometry and used it in several of his works, notably Circle Limit III. 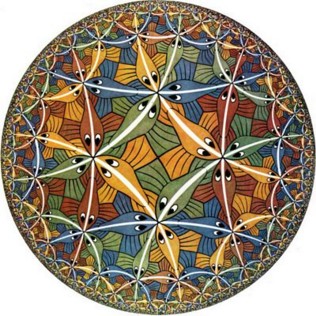 Hyperbolica implements three-dimensional hyperbolic geometry, in which your intuition about distances, angles, and orientation must be extended in order to find your way around and complete the quests. In a way, hyperbolic geometry is a game designer’s dream, as you can pack an arbitrary amount of detail into a finite game map.

Here is an introduction to hyperbolic space by the developer.

This is how the world is modeled and rendered in hyperbolic geometry.

I bought a copy of the game on Steam for CHF 17 (this is an outright purchase—there are no in-game purchases or downloadable content), installed it, and it works just fine on my modest laptop. I have just begun to explore this world, and look forward to learning more about it.