Is the U.S. an Engine that Destroys Families?

Sceptics of mass third world immigration into developed Western societies are often chided by advocates of open borders citing statistics purporting to show that immigrants out-perform the native born on a variety of metrics of social and economic success. For example, in every year from 1996 through 2016, the rate at which immigrants started new businesses was two or more times greater than that of U.S. born individuals. At the top of the business pyramid, more than 40% of Fortune 500 companies had a founder who was an immigrant or the child of one. Immigrant families carry less debt than those of native U.S. citizens, and this despite many making remittances from their income in the U.S. to extended family in the old country.

Between the years of 2012 and 2018, U.S.-born citizens in Texas were two times as likely to be arrested for violent crimes, 2.5 times more likely for drug crimes, and four times as likely to arrest for property crimes as illegal immigrants in the state.

What can account for this? Are native-born U.S. citizens just lazy and complacent, compared to immigrants from all of the rest of the world? Well, maybe it’s something else. In 2017, the Center for Immigration Studies published a study, “Births to Unmarried Mothers by Nativity and Education” based on 2015 data from the National Center for Health Statistics (part of the U.S. Centers for Disease Control). Here are 2015 births by race/ethnicity and immigration status. 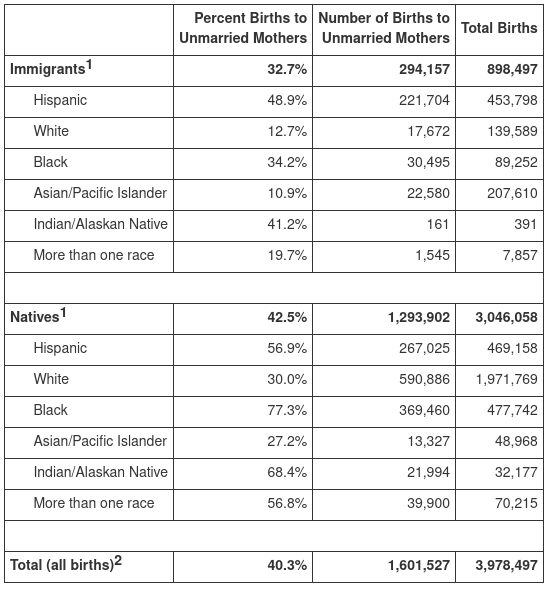 Now, what is stunning about these numbers, after you get over reeling at just how high all of the rates of illegitimate births are, is the fact that for every single race/ethnicity category the rate of illegitimate births to immigrant mothers is dramatically lower among immigrants than natives: 32.7% for immigrants as a whole vs. 42.5% for natives. Among some subgroups, the differences are very large: native black women are 2.26 times more likely to give birth while unmarried, and white women 2.36 times.

There are abundant statistics that show that children raised in single parent households (with single mothers accounting for most of these) perform worse in essentially every socioeconomic measure: educational attainment, crime rate, unemployment, lifetime earnings. Could it be possible that the much-vaunted superior performance of immigrants, whether illegal or legal, is largely due to the fact that they are far more likely to have intact families?

What causes U.S. natives to have such elevated rates of illegitimate births compared to immigrants? Is it the pernicious social policies dating to the “Great Society” of the 1960s which destroyed family formation and preservation, especially among low income and minority populations? Could it be a culture which disdains, mocks, and discourages the “nuclear family”? Might the persistent attack on traditional male values and encouragement of “eternal adolescence” instead of maturing into a good provider for a family have something to do with it?

Well, if that were the case, then you’d expect the U.S.-born, educated, and assimilated children of immigrant parents to converge toward the behaviour of the native-born. And that is what appears to be happening. Immersed in the U.S. cultural milieu, children of immigrants work less, are more likely to be in poverty, and have higher rates of illegitimate birth than their parents.

Immigration advocates cite the performance of new arrivals as necessary to maintain the economic vitality of a stagnating society. But if it’s a dysfunctional society they’re assimilating to that’s causing the stagnation, then bringing in new people is only consuming non-renewable resources if their children end up just like the natives. It’s like giving a blood transfusion into the arm of a patient who’s bleeding out through the femoral artery.

Maybe the U.S needs to fix its own society before Hoovering up ambitious and hard-working people from all over the world and turning their children into a dependent underclass.

Great piece John but of course it is the goal of all social welfare states to replace the family. It’s a self licking ice cream cone. First you develop a system that can rival the support provided by the family unit. Then you put in place incentives to embrace that destructive system. Finally you specifically target second and third generation immigrants through the state sponsored education system to jump on the government dole. Again I’m not surprised by what you record here. 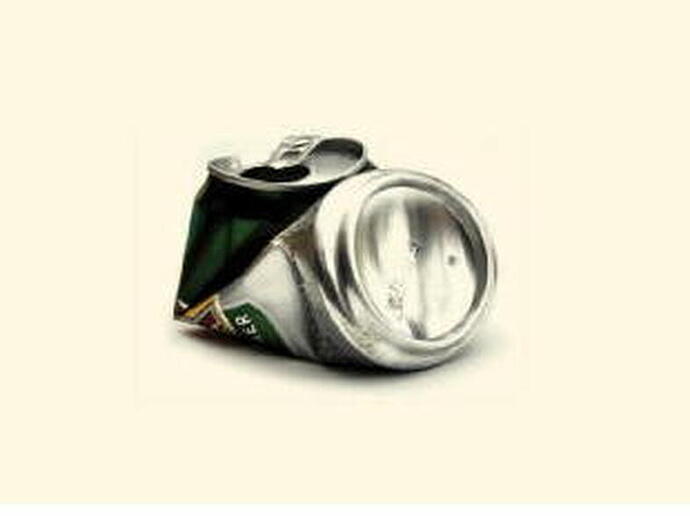 In his new book, Charles Murray, co-author of the controversial The Bell Curve, argues that in an increasingly economically stratified America, the white working class is slipping behind.

Reducing the gospel of Christ to the consumerism of Christendom has hastened the deterioration of our culture. But opportunity for repentance and renewal is always at hand.

It is such n engine, because it destroys fathers.
When a young girl gets pregnant,:marriage is the LAST thing on anybody’s mind. Of course the only people to be heard from are the girl and her family, the dad and his parents never seem to let put a peep. Maternal grandma and grandpa( unless grandmom is divorced or widowed too) will say: oh NO, IF you want to have the baby, you live with us for a year, or two…then maybe we’ll see how you feel bout getting married. It’s too big a step, it could change your whole life!(H’mmm…little late for that, innit?)

That is so asinine. If you marry when you’re very young, no property to speak of, you can get outta it in 12 weeks just by signing a few papers. What is wrong with these grandparents? Yes get married, give the kid a name—and most importantly, give the father….well, ANYTHING, jus some basic recognition that this is his kid too!
Sheee-uh, the mom in her sole discretion can opt into, or out of , parenthood without even consulting the dad! And if she opts in, well, it’s like Michel Jackson sang: “ 18 years, she got you 18 years”….really what is 9 months to 18 YEARS!?!?

But I’ve tried exploring this topic, this gross imbalance, on …three sites now, and the gents just don’t seem as bothered about it as I am.

In law school the notion of financial abortion was ridiculed mercilessly. The idea is, reflecting an economic version of the Roe rationale, that fathers could elect not to be made to provide any support.

If mom can get out of it by aborting, why shouldn’t dad be able to get out of parenthood? People always get so mad at me when I say this, I dky I keep doing it. Oh yes, yes, ideally the baby would have 2 loving, present parents. And I think socially/morally, we should try to reinforce that. Can’t really do it legally. But since we don’t, why not treat both contributors to the zygote equally?

Because that supports the patriarchy and is anti-woman, which we can’t define now.

What in practical terms does that mean, “burdening our children with debt”?

At some point, the unrepayable National Debt will be repudiated, either by outright refusal to pay (Hey! Our Betters stole Russia’s money. What is to stop them stealing every other countries’ funds?) or by hyperinflation. Either way, that will mean the end of the current tidal wave of imports on which we all depend and a massive shrinkage of government handouts, leading to misery at best and violence at worst.

If that happens soon, then we who have allowed it to happen will justifiably suffer. If it happens a few decades from now, then today’s innocent unborn will bear the burden. Either way, it is the young who will pay for the sins of their fathers.

If they voted for Biden they deserve whatever they get.

My perspective is more brittle: Men not acting like men is the root of all this failure.

My father (born 1937; deceased) corrected every juvenile he ever encountered. And this was usually a “k-mart kid” driving their mother insane.

And the mother thanked him every time.