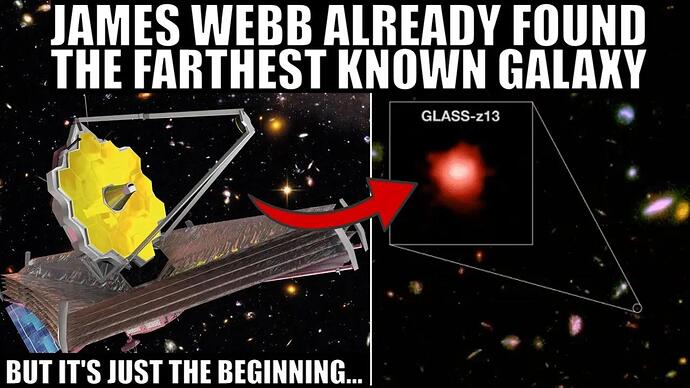 Here is the research paper, “Two Remarkably Luminous Galaxy Candidates at z≈11−13 Revealed by JWST”. This is the abstract.

The first few hundred Myrs at z>10 mark the last major uncharted epoch in the history of the Universe, where only a single galaxy (GNz11 at z≈11) is currently spectroscopically confirmed. Here we present a search for luminous z>10 galaxies with JWST/NIRCam photometry spanning ≈1–5μm and covering 49 arcmin² from the public JWST Early Release Science programs (CEERS and GLASS). Our most secure candidates are two {\rm M_{UV}}≈−21 systems: GLASS-z13 and GLASS-z11. These galaxies display abrupt ≳2.5 mag breaks in their spectral energy distributions, consistent with complete absorption of flux bluewards of Lyman-α that is redshifted to z≈13 and z≈11. Lower redshift interlopers such as dusty quiescent galaxies with strong Balmer breaks would be comfortably detected at >5σ in multiple bands where instead we find no flux. From SED modeling we infer that these galaxies have already built up ∼10^9 solar masses in stars over the ≲300–400 Myrs after the Big Bang. The brightness of these sources enable morphological constraints. Tantalizingly, GLASS-z11 shows a clearly extended exponential light profile, potentially consistent with a disk galaxy of r_{50}≈0.7 kpc. These sources, if confirmed, join GNz11 in defying number density forecasts for luminous galaxies based on Schechter UV luminosity functions, which require a survey area >10× larger than we have studied here to find such luminous sources at such high redshifts. They extend evidence from lower redshifts for little or no evolution in the bright end of the UV luminosity function into the cosmic dawn epoch, with implications for just how early these galaxies began forming. This, in turn, suggests that future deep JWST observations may identify relatively bright galaxies to much earlier epochs than might have been anticipated.

I’m just buried in all the math and astronomy and astrophysics of Stephen C. Meyer’s Return of the God Hypothesis. This stuff even makes some sense to me, and I was never a mathamatician.