Here are direct links to recent posts on NASA’s Webb blog about progress in tensioning the sunshield.

To convert from the quaint U.S. Eastern Standard Time AM/PM used the the posts to UTC, first convert to 24 hour time and then add 5 hours modulo 24.

In a media teleconference held yesterday, 2022-01-03, NASA’s Bill Ochs, James Webb Space Telescope project manager, said that when sunshield tensioning is complete, 70–75% of the 344 single-point failure items on the telescope will have been retired.

@NASAWebb
This is it: we’ve just wrapped up one of the most challenging steps of our journey to #UnfoldTheUniverse. With all five layers of sunshield tensioning complete, about 75% of our 344 single-point failures have been retired!
4 Likes
johnwalker 4 January 2022 19:15 #23

Here is the NASA press release on “Sunshield Successfully Deploys on NASA’s Next Flagship Telescope”.

This is the configuration of the telescope: 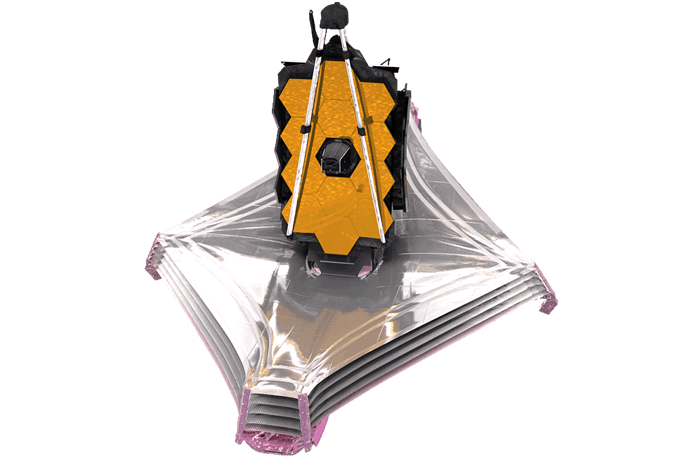 at this point in the deployment sequence.

As expected, the Webb original deployments timeline has changed over time. Sunshield tensioning was completed today, on the 10th day after launch. The secondary mirror deployment is now planned for tomorrow [2022-01-05] morning.

Live coverage of the deployment, from the Webb Mission Operations Center at the Space Telescope Science Institute in Baltimore, Maryland, will stream on nasa.gov/live starting at approximately 9:45 a.m. EST [14:45 UTC] (subject to change based on Webb’s operations).

Here is the telescope with the secondary mirror deployed. 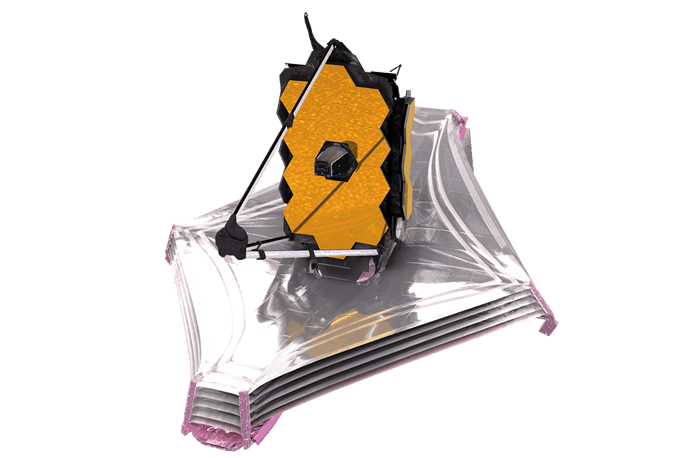 This is the NASA Live feed which will stream the deployment.

The secondary mirror deployment is now complete and the mirror is latched into its operating position. Here is the replay of the deployment, which is as exciting as watching paint dry as all there is to see is an animation of the mirror moving ever so slowly into position.

Witnessing these incremental successes of JWST (may they continue) is a welcome balm to the psyche. It is one of the very few things which presages any reason for optimism as to humanity’s future. I look forward to the first images. I suspect, however, this accomplishment resulted largely from drawing upon human and intellectual capital of the past.

The human and intellectual capital stock being created today for use going forward, however, is likely being contaminated and corroded (if not completely supplanted) by incoherent ‘woke’ religious tenets and social justice rubrics. Math itself, we are told, is “racist”. This will surely diminish the motivation and intellect required for such accomplishments to continue unabated. I foresee less of it in this society, so busy killing itself.

The human and intellectual capital stock being created today for use going forward, however, is likely being contaminated and corroded (if not completely supplanted) by incoherent ‘woke’ religious tenets and social justice rubrics.

I seriously doubt if that is the case in Russia, China … or even South Korea (KPop notwithstanding). Whatever one thinks about Putin or Xi, they clearly care about the long-term interests of their citizens.

There are good reasons for being optimistic about the future of the human race, even if the Best & Brightest succeed in driving the US into the same dustbin of history which already contains Greece, Rome, Incas, Britain and many more. That dustbin is getting crowded, and yet the human race as a whole has continued to march forwards!

JWST deploys its sunshade and its social media sauciness:

@NASAWebb
Sorry for the shade, @NASASun, @NASAMoon & @NASAEarth! But you're just not cool enough 😎 Now fully deployed, our sunshield blocks your heat & light so that our mirrors will be able to detect faint heat signals in the universe: https://t.co/mggJkh6swO #UnfoldTheUniverse
johnwalker 6 January 2022 16:27 #29

At 13:48 on 2022-01-06 the Aft Deployable Instrument Radiator was deployed on the back side of the telescope structure: “Webb’s Specialized Heat Radiator Deployed Successfully”.

The Aft Deployable Instrument Radiator, or ADIR, is a large, rectangular, 4 by 8-foot panel, consisting of high-purity aluminum subpanels covered in painted honeycomb cells to create an ultra-black surface. The ADIR, which swings away from the backside of the telescope like a trap door on hinges, is connected to the instruments via flexible straps made of high-purity aluminum foil. The radiator draws heat out of the instruments and dumps it overboard to the extreme cold background of deep space. 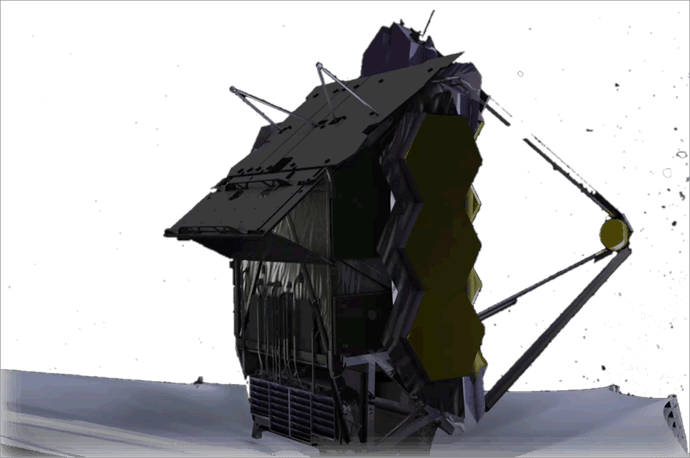 Deployment of the two primary mirror wings, the final major deployable items, is planned for January 7th and 8th.

NASA reports the port side primary mirror wing has been deployed and is now locked into position, “First of Two Primary Mirror Wings Unfolds”.

Now that the port side wing panel is locked in place, ground teams will prepare to deploy and latch the starboard (right side) panel tomorrow. Upon completion, Webb will have concluded its major deployment sequence.

Here is the telescope with the port primary wing deployed. 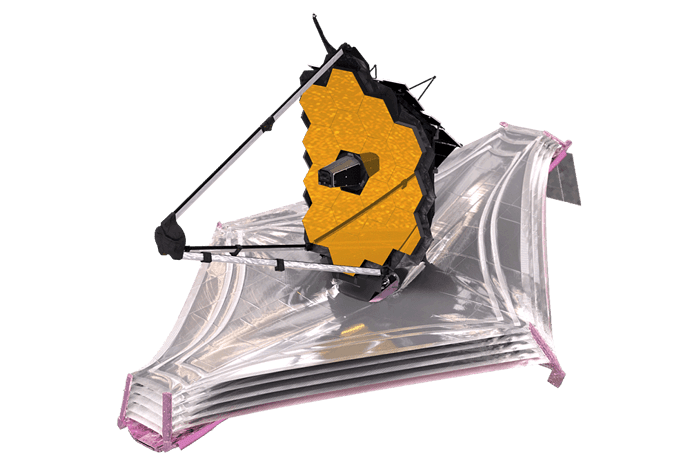 Today, at 1:17 p.m. EST [18:17 UTC on 2022-02-08], NASA’s James Webb Space Telescope completed all of its large-scale deployments with the extension and latching of its starboard primary mirror wing. Now that the telescope is structurally fully deployed – with the secondary mirror tripod and both primary mirror wings in place – the three-month process of aligning all of Webb’s telescope optics into a precise system can now commence.

That is very impressive! I am pretty sure I could not perform 344 essential separate actions in the kitchen without ruining supper. NASA is a great source of frustration to many of us, but they deserve plaudits for accomplishing something as complicated as this. Well done!

Here is Rand Simberg on the lessons, or non-lessons, of Webb. 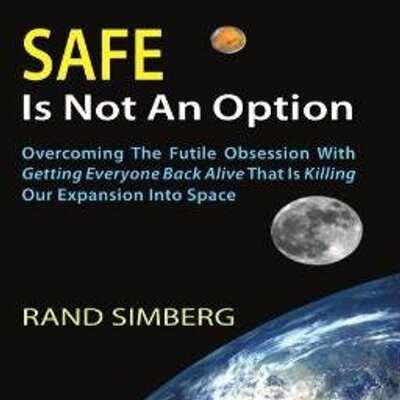 @SafeNotAnOption
Do not let the technical success of Webb make anyone think that we should have done it that way, or should ever repeat it. The future must lie in space assembly, not origami.

I’d add, that, or really big rockets. Starship could have launched a single-piece mirror larger than Webb which could have been built at a fraction of the cost. While a deployable sun shield would still be required, it could have been made far more robust thanks to the payload capacity of Starship.

Webb was certainly a very high risk approach, and it is not something we would ever want to repeat – primarily because we have different options now that were not available decades in the past when the Webb concept was congealing. Resources were committed to the Space Shuttle and the International Space Station that would have been better invested in SpacEx-type rocket development and the capacity to position infra-red and radio telescopes on the far side of the Moon. But it is easy to be wise after the event.