After a quarter of a century of development, US$ 10 billion in expenditures, it’s time to “Push the button, Max” and send the James Webb Space Telescope into space atop an Ariane 5 launcher which was part of the European Space Agency’s contribution to the project. Launch is scheduled for 12:20 UTC on Christmas Day, 2021-12-25, withe NASA Webcast starting around 20 minutes before launch. If the launch is successful, it will begin the “29 Days on the Edge” as the telescope’s complex structure deploys in an exercise in gigabuck origami far from any hope of repair should something malfunction.

Here is a preview of the launch and mission from Everyday Astronaut.

When I was a kid I would want to stay up for Santa.

Now that I am a bit older and more mature, I may stay up for a “Christmas Miracle” James Webb Telescope Launch.

Will it resembly one of the SpaceX Starship launches in the video below? Time will tell.

And that was the easy part.

The launch, through separation of the telescope, deployment of its solar arrays, and confirmation that they were generating power was completely normal. Here is video from the second stage of the Ariane 5 launcher showing (with some data drop outs) separation of the spacecraft and extension of the solar panels.

This is the time line of the six month commissioning process.

Here is a chart of cool-down to operating temperature for the various instruments. 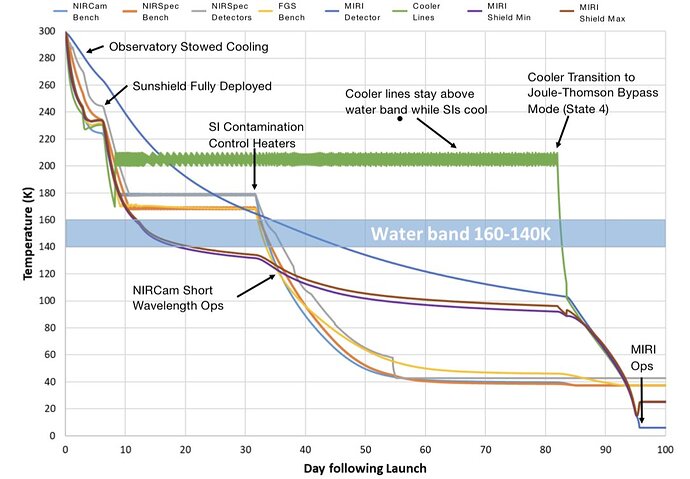 Both of these charts are from this 2020 poster [PDF]. The chill-down has to be carefully timed so that individual components do not fall below the temperature at which ice can form from water vapour outgassed from the structure until sufficient time has passed for outgassing to have stopped.

2 of 23 commissioning milestones passed so far on Christmas Day 2021. I calculate commissioning completion date to be Thursday June 23, 2021 (from above chart stated L+180d).

At 7:50 pm EST, Webb’s first mid-course correction burn began. It lasted 65 minutes and is now complete. This burn is one of two milestones that are time critical — the first was the solar array deployment, which happened shortly after launch.

This burn adjusts Webb’s trajectory toward the second Lagrange point, commonly known as L2. After launch, Webb needs to make its own mid-course thrust correction maneuvers to get to its orbit. This is by design: Webb received an intentional slight under-burn from the Ariane-5 that launched it into space, because it’s not possible to correct for overthrust. If Webb gets too much thrust, it can’t turn around to move back toward Earth because that would directly expose its telescope optics and structure to the Sun, overheating them and aborting the science mission before it can even begin.

Therefore, we ease up to the correct velocity in three stages, being careful never to deliver too much thrust — there will be three mid-course correction maneuvers in total.

After this burn, no key milestones are time critical, so the order, location, timing, and duration of deployments may change.

@df2mz
JWST completed its first midcourse correction burn. The little kink is visible at 00:50 when the burn started. According to @NASAWebb the burn took 65 min. The spacecraft is now setting here and local interference is increasing. Thanks @NASAWebb for the fun! 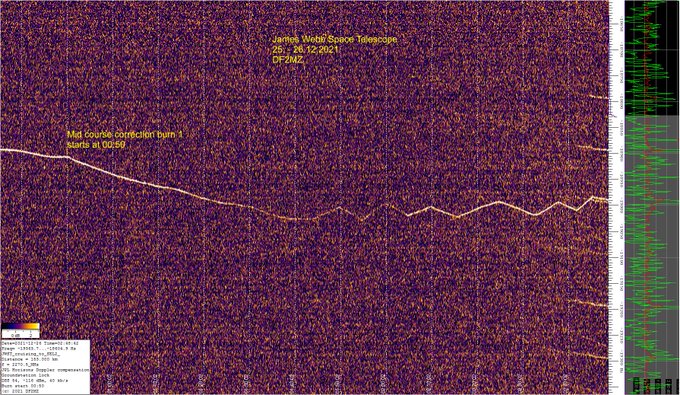 The waterfall plot shows the Doppler change in frequency as the burn progressed.

@df2mz
I did an analysis of my downlink during the MCB. I see a frequency drop of roughly -120 Hz, corresponding to a change in range rate of -15.8 m/s. That means the outward speed increased by 15.8 m/s. The kinky uplink pattern doesn't help to determine the landmarks.

Here are my antennas. 1m dishes for S- and X-band, cross yagis for VHF and UHF, an LPDA for L- and S-band and an LPDA for VHF/UHF. pic.twitter.com/RygfAAr0N5 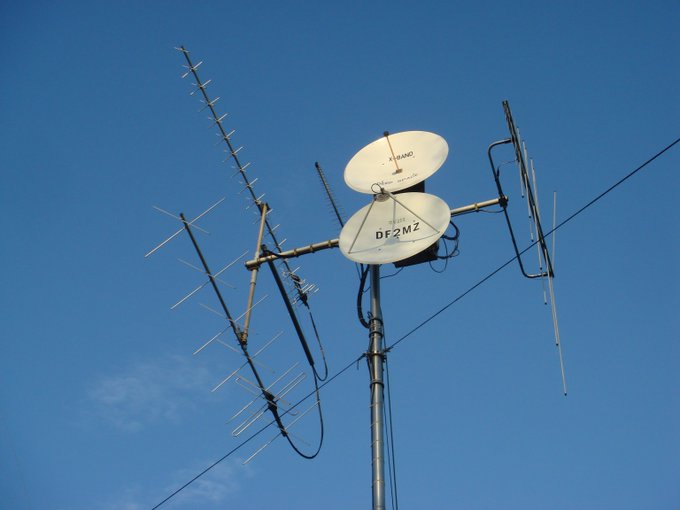 Shortly after 10 am EST [15:00 UTC] on Dec. 26, the Webb team began the process of releasing the gimbaled antenna assembly, or GAA, which includes Webb’s high-data-rate dish antenna. This antenna will be used to send at least 28.6 Gbytes of science data down from the observatory, twice a day. The team has now released and tested the motion of the antenna assembly — the entire process took about one hour.

Separately, overnight, the temperature sensors and strain gauges on the telescope were activated for the first time. Temperature and strain data are now available to engineers monitoring Webb’s thermal and structural systems.

This site provides live tracking of Webb’s position relative to Earth and its science station at L2, showing deployment events along the way.

NASA reports that at 6 hours after liftoff, 00:20 UTC om 2021-12-28, the Webb telescope completed its second mid-course correction burn (MCC-1b), firing its thrusters for 9 minutes and 27 seconds. The final mid-course correction, MCC-2, is planned for 29 days after launch.

A document, “More Than You Wanted to Know About Webb’s Mid-Course Corrections”, explains the delicate nature of the corrections.

One interesting aspect of the Webb launch and the Mid-Course Corrections is that we always “aim a little bit low.” The L2 point and Webb’s loose orbit around it are only semi-stable. In the radial direction (along the Sun-Earth line), there is an equilibrium point where in principle it would take no thrust to remain in position; however, that point is not stable. If Webb drifted a little bit toward Earth, it would continue (in the absence of corrective thrust) to drift ever closer; if it drifted a little bit away from Earth, it would continue to drift farther away. Webb has thrusters only on the warm, Sun-facing side of the observatory. We would not want the hot thrusters to contaminate the cold side of the observatory with unwanted heat or with rocket exhaust that could condense on the cold optics. This means the thrusters can only push Webb away from the Sun, not back toward the Sun (and Earth). We thus design the launch insertion and the MCCs to always keep us on the uphill side of the gravitational potential, we never want to go over the crest – and drift away downhill on the other side, with no ability to come back.

The next deployment event is release of the forward sunshield pallet. This should now be in progress.

NASA now confirms that both the forward and aft sunshield pallets have been successfully deployed. These pallets carry the sunshield, which will extend from both sides of the pallet.

This image shows the configuration with both pallets deployed. 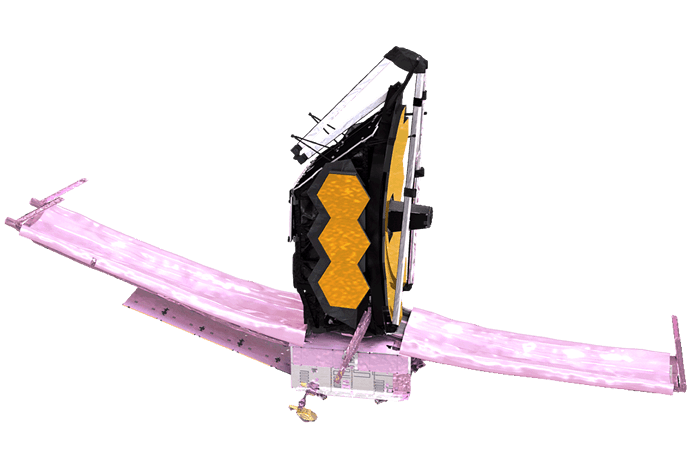 Is there a countdown of single point of failure possibilities remaining? I read that, initially, there were 344.

I have not seen a countdown in terms of failure points. From the descriptions I’ve read, many of the potential points of failure are associated with deploying the sun shield, in particularly extending the delicate five-layer shield from the pallets which have now been extended. This operation has never been tested in the weightless environment in which it will be performed.

This operation has never been tested in the weightless environment in which it will be performed.

The more I learn about it, the more I find this telescope creation to be inspiring as to human capabilities. On Ratburger, I was skeptical as to the likelihood of success of the ‘sky crane’s’ ability to land the Mars Curiosity Rover. Happily, I ate some lyophilized (in recognition of food for space travel) crow on that one. I find myself thinking of such projects as the Webb as steps along the way toward a worthy future of humanity and am rooting for success. That future is outlined by much of today’s science fiction about space faring, but also realistically by The High Frontier and Starship Century. Space travel and expansion into new environments represent, I think, the most optimistic futures I can imagine.

@NASAWebb
Due to the precision of our launch and our first two mid-course corrections, our team has determined that Webb should have enough fuel to allow support of science operations for significantly more than a 10-year science lifetime! 💫 https://t.co/1e3sWlynPI
6 Likes
johnwalker 29 December 2021 23:02 #15

This afternoon, the Webb team successfully extended the observatory’s Deployable Tower Assembly (DTA), creating critical distance between the two halves of the spacecraft.

The DTA extended about 48 inches (1.22 meters), putting room between the upper section of the observatory, which houses the mirrors and scientific instruments, and the spacecraft bus, which holds the electronics and propulsion systems. This creates enough distance to allow the sensitive mirrors and instruments to cool down to the necessary temperatures to detect infrared light. This gap will also provide room for the sunshield membranes to fully unfold.

The deployment took more than six and a half hours, as engineers activated release devices and configured heaters, software, and electronics, before commanding the DTA itself to extend. The movement of the DTA, which looks like a large, black pipe, is driven by a motor. The team began the deployment at approximately 9:45 a.m. EST [14:45 UTC] and completed it at approximately 4:24 p.m. EST [21:42 UTC]. 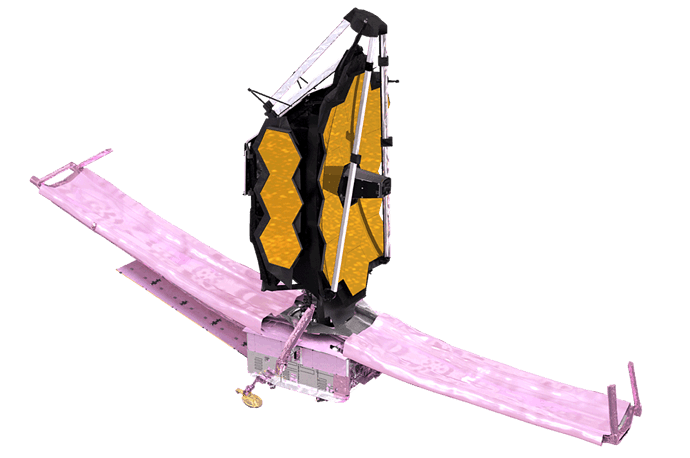 Shortly after 9 a.m. EST [14:00 UTC] today, the Webb team completed deployment of the observatory’s aft momentum flap. In a process that took about eight minutes, engineers released the flap’s hold-down devices, and a spring brought the flap into its final position.

The aft momentum flap helps minimize the fuel engineers will need to use throughout Webb’s lifetime, by helping to maintain the observatory’s orientation in orbit. As photons of sunlight hit the large sunshield surface, they will exert pressure on the sunshield, and if not properly balanced, this solar pressure would cause rotations of the observatory that must be accommodated by its reaction wheels. The aft momentum flap will sail on the pressure of these photons, balancing the sunshield and keeping the observatory steady. 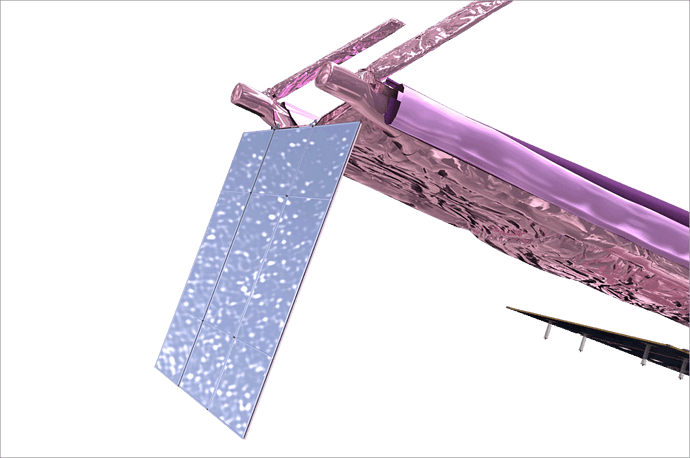 Then, later in the day, “Webb Team Releases Sunshield Covers”.

Webb’s engineers have released and rolled up the sunshield covers that protected the thin layers of Webb’s sunshield during launch. After the team electrically activated release devices to release the covers, they executed commands to roll the covers up into a holding position, exposing Webb’s sunshield membranes to space for the first time. 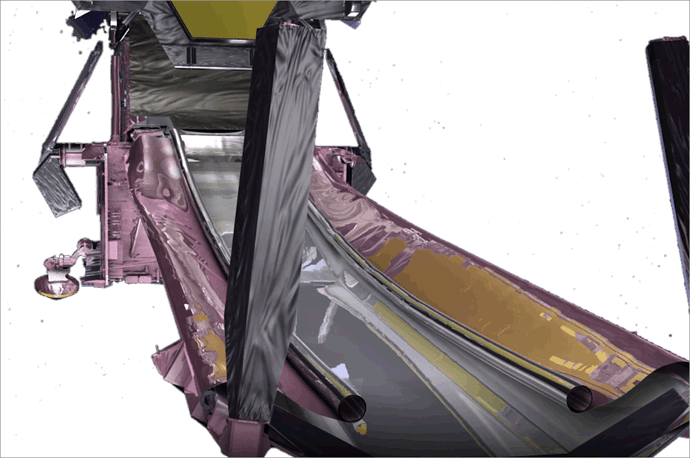 Yesterday, 2021-12-31, both of Webb’s sun shield mid-booms deployed, extending laterally and pulling the sun shield into its diamond shape. NASA reported in “First of Two Sunshield Mid-Booms Deploys” that deployment of the first boom was delayed due to some sensors reporting the sun shield cover had not completely rolled up, but as other data sources indicated it was correctly stowed, deployment began at 18:30 UTC and was complete at 21:49 UTC. 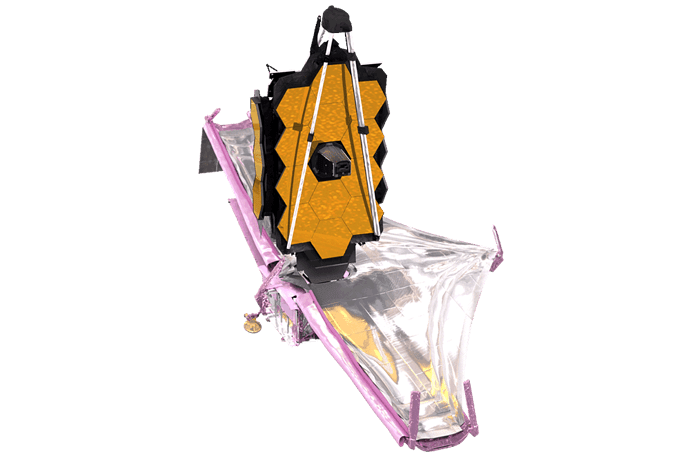 The completion of the sunshield cover and mid-boom deployments over the past two days marks a critical milestone for Webb: all 107 membrane release devices associated with the sunshield deployment — every single one of which had to work in order for the sunshield to deploy — have now successfully released. Webb has 178 of these ‘non-explosive actuators’ in all; 107 were used to keep the sunshield safe and folded prior to deployment. 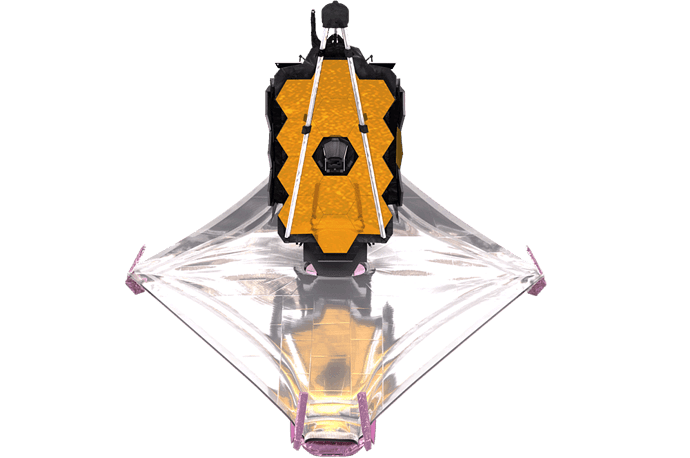 The next step, expected over the today and tomorrow, will be tensioning the sun shield, which is presently in a floppy state, into its operating configuration.

all 107 membrane release devices associated with the sunshield deployment — every single one of which had to work in order for the sunshield to deploy — have now successfully released.

Whew! Thank goodness for that!

some sensors reporting the sun shield cover had not completely rolled up, but as other data sources indicated it was correctly stowed,

There must have been a whole lot of heartburn associated with that. Imagine the stress – one sensor says there is a problem, other sensors say there is not; and there is no way to get independent validation of the actual situation on a $10 Billion satellite which is now beyond the Moon. Do you cross your fingers and push the actuator button … or not?

@NASAWebb
Can you feel the tension? Webb is feeling it...in a good way! We tensioned 3 of 5 sunshield layers yesterday. Today we start with Layer 4: https://t.co/qFHcqjUniL Follow along LIVE for the final layer starting ~9:30 am ET (14:30 UTC): https://t.co/E0iKHwugcn #UnfoldTheUniverse
5 Likes
next page →