Jayanta “Jay” Bhattacharya is a professor of medicine, economics, and health policy at Stanford University, where he received both an M.D. and Ph.D in economics. In October 2020, he co-authored the Great Barrington Declaration, which opposed the lockdown policy and advocated a strategy of “Focused Protection” aimed at protecting the most vulnerable while,

Those who are not vulnerable should immediately be allowed to resume life as normal. Simple hygiene measures, such as hand washing and staying home when sick should be practiced by everyone to reduce the herd immunity threshold. Schools and universities should be open for in-person teaching. Extracurricular activities, such as sports, should be resumed. Young low-risk adults should work normally, rather than from home. Restaurants and other businesses should open. Arts, music, sport and other cultural activities should resume. People who are more at risk may participate if they wish, while society as a whole enjoys the protection conferred upon the vulnerable by those who have built up herd immunity.

In short order, the Declaration was endorsed by tens of thousands of epidemiologists, physicians, and scientists, and has by now been signed by almost a million people (935,314 at this writing, including 47,379 medical practitioners and 16,016 medical and public health scientists).

Intended to open debate as to whether the COVID-19 pandemic merited policies unprecedented in the history of public health responses to infectious disease, the authors of the Declaration found themselves attacked as opponents of “the science” and a menace to the health and lives of a global population at risk from the disease.

Now, Dr Bhattacharya has published an article on Tablet Magazine, “How Stanford Failed the Academic Freedom Test”, describing his experience at Stanford University, where he is a tenured professor, after issuing the Declaration and participating in the public debate over lockdowns and other responses to COVID-19.

We live in an age when a high public health bureaucrat can, without irony, announce to the world that if you criticize him, you are not simply criticizing a man. You are criticizing “the science” itself. The irony in this idea of “science” as a set of sacred doctrines and beliefs is that the Age of Enlightenment, which gave us our modern definitions of scientific methodology, was a reaction against a religious clerisy that claimed for itself the sole ability to distinguish truth from untruth. The COVID-19 pandemic has apparently brought us full circle, with a public health clerisy having replaced the religious one as the singular source of unassailable truth.

The analogy goes further, unfortunately. The same priests of public health that have the authority to distinguish heresy from orthodoxy also cast out heretics, just like the medieval Catholic Church did. Top universities, like Stanford, where I have been both student and professor since 1986, are supposed to protect against such orthodoxies, creating a safe space for scientists to think and to test their ideas. Sadly, Stanford has failed in this crucial aspect of its mission, as I can attest from personal experience.

Even by October 2020, it was clear that the Chinese-inspired lockdowns had done tremendous harm to the physical and psychological well-being of vast populations, especially children, the poor, and the working class. Closed schools consigned a generation of children worldwide to live shorter, less healthy lives. In July 2020, the Centers for Disease Control released an estimate that 1 in 4 young adults in the United States had seriously considered suicide during the previous month. The U.N. estimated that an additional 130 million people would be thrown into dire food insecurity—starvation—by the economic dislocation caused by the lockdowns. The primary beneficiaries of the lockdown—if there were in fact any beneficiaries of these drastic anti-social measures—were among a narrow class of well-off people who could work from home via Zoom without risk of losing their jobs.

Rather than opening a debate over this policy, instead:

It was at first quite perplexing to be the target of what turned out to be a well-organized, government-sponsored campaign of smears and suppression of scientific argument and evidence. I had taken no money for writing the declaration. Yet press outlets somehow turned Gupta, Kulldorf, and me into tools of a nefarious plot to destroy the world by spreading “disinformation” that would cause mass death. I started receiving death threats and racist hate mail.

About a year later, after historian Phil Magness made a FOIA request, I learned a part of the story of how the U.S. government-sponsored propaganda campaign against the GBD came into being. Four days after we wrote the GBD, Francis Collins, the geneticist and lab scientist who was then the head of the U.S. National Institutes of Health, wrote an email to Anthony Fauci, the immunologist and lab scientist who is the head of the National Institute of Allergy and Infectious Diseases. In the email, Collins called Martin, Sunetra, and me “fringe epidemiologists” and called for a devastating public takedown. The attacks on the three of us, aided by the cooperation of supposedly private social media platforms like Twitter, were launched shortly after Collins sent that email.

What was the reaction of Stanford University when one of its prominent faculty members dared to dissent from the government-endorsed definition of “the science”?

The most egregious violation of academic freedom was an implicit decision by the university to deplatform me. Though I have given dozens of talks in seminars at Stanford over the past decades, in December 2020, my department chair blocked an attempt to organize a seminar where I would publicly present the ideas of the GBD. Stanford’s former president, John Hennessey, tried to set up a discussion between me and others on COVID policy, but he was unable to, owing to the absence of support from the university.

In August 2021, Melissa Bondy, the chair of epidemiology at Stanford, helped circulate a secret petition around the medical school asking the university president to censor me for accurate testimony that I had given to Florida Gov. Ron DeSantis at a publicly televised policy roundtable. I testified that no randomized trials yet demonstrate the efficacy of masks on children to contain COVID. Though the secret petition did not name me specifically, it quoted me and asked the university to suppress such speech by faculty members. This petition imposed unethical pressure on faculty members—especially junior faculty members worried about tenure votes—to sign on.

The undisguised aim of this petition was to expel dissenting Stanford faculty like me from public academic life, making a mockery of the idea of academic freedom at exactly the time when we needed it the most. Ironically, if Stanford had defended my right to speak, there would have been no need for such a petition, as there would have been no confusion about the fact that my opinions were my own and not that of my colleagues.

Here is an hour and a half conversation in December 2022 between Dr Bhattacharya and University of California San Diego physics professor Brian Keating on the latter’s “Into the Impossible” podcast. 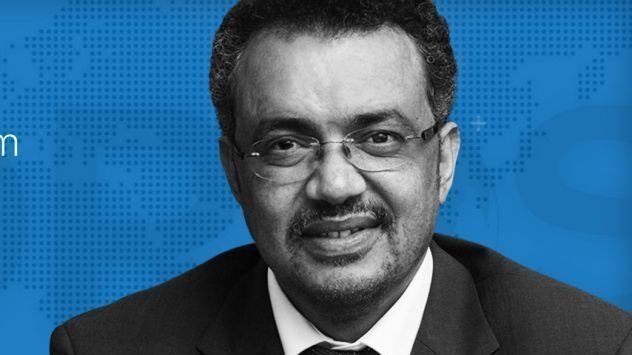 Call for the resignation of Tedros Adhanom Ghebreyesus, WHO Director General

The same priests of public health that have the authority to distinguish heresy from orthodoxy also cast out heretics, just like the medieval Catholic Church did.

The analogy with the Medieval Catholic Church goes further than that:

In those distant happy days, one could sin with abandon and then purchase an indulgence which ensured that God would not take that sin into account in the AfterLife.

In today’s miserable Far Left dominated world, all one needs to do is publicly subscribe to DIE (Diversity, Inclusion, Equity) and build a tax-subsidized windmill – and then one’s extensive unnecessary flights on one’s private jet with be admired rather than condemned.

This piece by Freddie Sayers at UnHerd covers an interview with Prof. Battacharya in late Sept 2022 about his lawsuit against the US federal government. Parts of the interview touch on topics related to Stanford’s disgraceful actions and behavior.

In the meantime, Sweden’s failing pursuit of herd immunity is showing that Jay Bhattacharya’s work is simply wrong much more than unfairly censured: 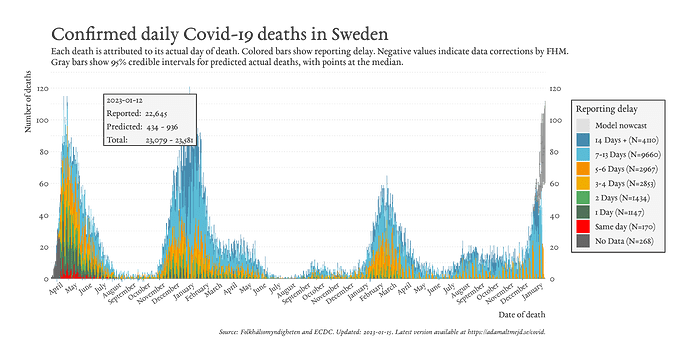 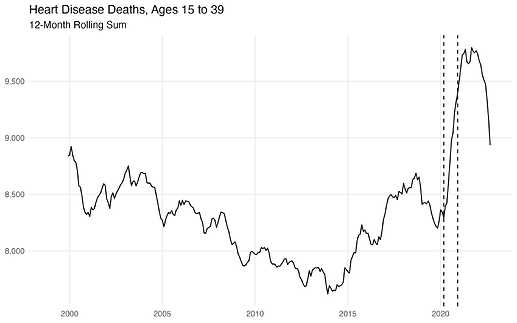 Lehman’s chart – assuming the data is correct (which we should never assume) – simply shows a departure from trend starting around 2015, long before the CovidScam. Obvious question is – Why?

It also shows a major increase around 2021. There is no way of telling from this chart if that more recent pulse in deaths of young people is due to (a) Covid, (b) the politically-mandated injectants, or (c) space aliens.

It also shows a major increase around 2021.

These forms of data smoothing have the consequence of shifting the displayed smoothed curve later in time than the raw unsmoothed data. I discuss this and show examples in the “Simple moving averages” section of the “Signal and Noise” chapter of The Hacker’s Diet. Here is a chart from that section showing a sinusoidal trend with random noise added, then filtered by simple moving averages of 5, 10, 20, and 30 days. You can see how the moving average is increasingly displaced to the right as the number of days included in it increases. 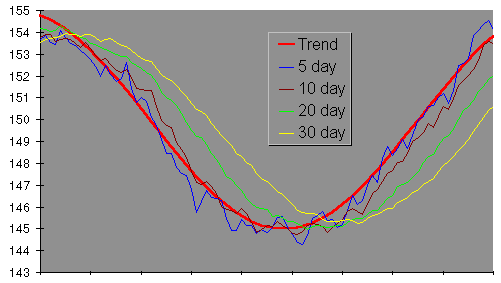 This means that the sharp rise shown in the ”Rolling Sum” (whatever that may be) chart is probably displaced to later than the rise in the raw data from which it was computed. This makes the near alignment between the steep rise in the chart and the dashed line identified a “COVID starts” (if you believe it wasn’t present in some regions several months earlier) suspect.