Kerbal Space Program is a computer game much beloved by space nerds and aspiring rocket engineers. It allows players to manage their own space program, building rockets, spacecraft, and exploring a miniature solar system with plausible laws of physics that teach the realities of rocket propulsion, orbital mechanics, and interplanetary navigation.

Kerbal Space Program was initially released for early access in 2011, finally emerging from beta in 2015. In 2019, a sequel, Kerbal Space Program 2, was announced, with delivery set for early 2020. Well, that didn’t happen, nor did the rescheduled release in the third quarter of 2021. The game began to appear headed for membership in the Golden Vaporware Club and become another exemplar of the Second System Syndrome, but now, its current developer, Intercept Games, assures gamers it’s coming “real soon now” and will be released sometime in 2022, which some of those who have been waiting interpret as “sometime in the 21st century”.

Anyway, the developers have been releasing impressive teasers of work in progress, the most recent of which describes additions for interstellar travel, including the architectural changes needed to accommodate propulsion technologies which deliver thrust for extremely long periods of time which, in the original game, would have required the player to wait years or centuries while the game engine evolved the trajectory in real time.

Intercept Games, developer of Kerbal Space Program 2, has just announced the game will ship for PC in “Early 2023”. This is three years after the initially announced release date, with multiple release date predictions and postponements since then. 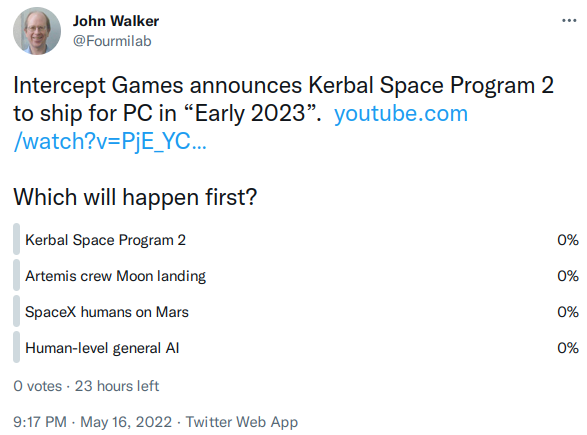