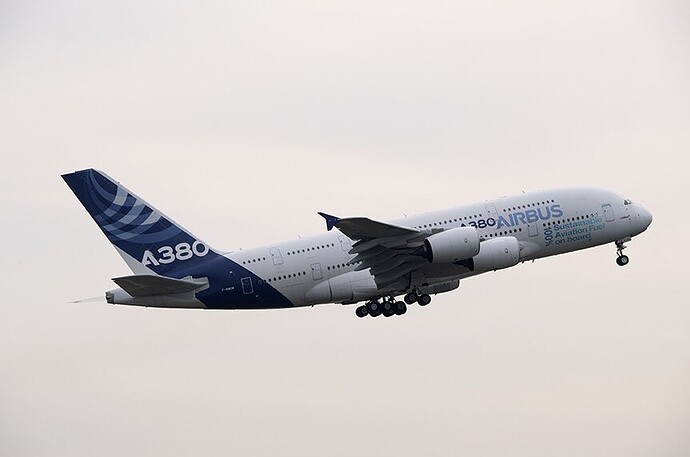 Airbus has flown an A380 with one of its four Rolls-Royce Trent 900 engines running on 100% sustainable aviation fuel (SAF), produced from used cooking oil and waste fats by France’s Total Energies.

Sustainable? I guess that means Airbus used cooking oils and waste fats derived only from non-GMO crops grown in hand-tilled fields (no diesel tractors), without any use of fertilizers & insecticides (derived from gas), transported by horse-drawn carts (no diesel trucks) to processing facilities beside a river driven by water wheels (no fossil fuels).

And I guess those Rolls Royce engines are lubricated with tallow instead of petroleum-derived oils.

Those whom the Gods wish to destroy, they first make mad.

The first fundamental innumeracy is that the potential world supply of used cooking oil is trivial.

The second fundamental economic illiteracy is that when the supply of alternative fuel is limited not everything has to run on alternative fuel. There only needs to be one “swing” use of moderate capacity.

For example, a small number of biodiesel-capable trucks can eat all the biodiesel (or close fuels) capable of being produces and moots the need to make biofuel aircraft, ships, etc.

Also, there are enough E85 cars and light trucks out there to eat all the ethanol that will ever be produced. Thus, there is no need to make E85 chainsaws or make all cars E85. 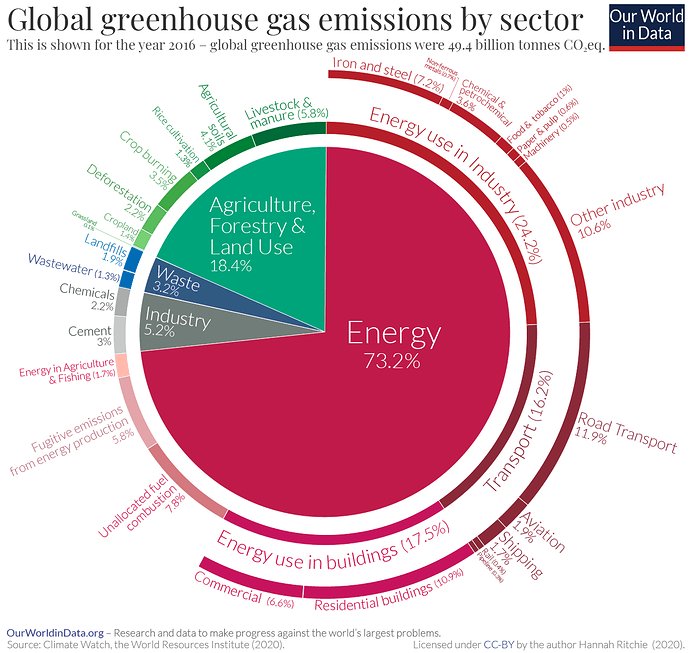 If you completely eliminated all emissions from aviation, you’d reduce greenhouse gas emissions by around one third of those produced by livestock farts and poop. Road transport accounts for more than six times the emissions produced by aviation.

There is no concept of picking the low-hanging fruit.

One of the usually-ignored factors about Radiatively Active Gases (the scientific term for the erroneous “greenhouse gas” term – greenhouses work by inhibiting convection; RAGs work by absorbing and re-radiating thermal radiation) is that water vapor is much more significant than life-giving carbon dioxide.

So what? Water vapor eventually condenses and returns to the oceans, just as carbon dioxide is eventually absorbed by plants and turned into life-giving oxygen and food. However, jets spend much of their time in the stratosphere, which can be thought of as a planet-wide inversion layer (cf a Los Angeles smog). When jet fuel is burned, it produces water vapor as well as carbon dioxide, and that water vapor hangs around in the stratosphere.

As far as I can tell, this aspect of the Catastrophic Anthropogenic Global Warming Scam receives relatively little attention – perhaps because the proponents of CAGW do not want to interfere with their Business Class flights to conferences in exotic locations. The reduction in air traffic during the CovidScam might actually provide some useful data – if anyone can get a grant to examine the facts.

The first fundamental innumeracy is that the potential world supply of used cooking oil is trivial.

The process by which “sustainable aviation fuel” is produced from cooking oil is called “hydroprocessed esters and fatty acids) HEFA. The Air Transport Action Group September 2021 report “Fueling Net Zero” [PDF] states that “While almost all production today uses the HEFA pathway, feedstock constraints will limit this to 6%–8% of required capacity”. And this includes all potential sources which can be used as inputs to HEFA, not just cooking oil.

The report goes on to say “Most production is likely to use the Alcohol-to-Jet (AtJ) and Fischer-Tropsch (FT) pathways. The first commercial FT and AtJ facilities are expected to start production in 2021 and 2022 respectively, building the foundations for the industry to scale production.” In other words, forecasts are based upon mass deployment of technologies for which pilot plants are just now being built.

But not to worry, “Rapid technology developments will reduce the price premium for SAF. By 2050, the average cost is estimated at $760-$900 per tonne SAF. This is well within the historical cost range of fossil fuels, although slightly higher than the historical average.” … “The industry will require 5,000 – 7,000 renewable fuel refineries by 2050.” … “Building this infrastructure will require 1,080 – 1,450 billion US dollars.”

A trillion here, a trillion there….

I have followed this topic for many years. There are two FT operations in Qatar, the older one came online in 2007. It is rated at 34,000 bbl/day, the other one I know less about, but it was rated about 3 times that much. The feedstock is natural gas, but they would work just as well with electrolytic hydrogen and CO2 pulled out of the air. It would take about 3000 of the smaller-sized plant to supply the current consumption of oil.

The economics are a bit dicey. At present the main cost is the capital for the hydrogen electrolyzers.