Commercial synthetic aperture radar satellite constellations such as the European Space Agency’s Sentinel-1 mission use C-band (4 to 8 GHz) radar to provide day and night, all-weather imaging of the Earth. This overlaps the NATO G-band (4 to 6 GHz) used by Patriot missile defence system and many other military radars including Russian S-400, Chinese Type-381, and Japanese FCS-3. These radars, when active, emit signals that swamp the surface return to the radar satellite and create bands of interference on the imagery they produce. Analysis of this interference allows pinpointing the locations of the radars. Here is a radar image of Scandinavia, showing the locations of the Swedish STRIL air and missile defence sites: the radars are located at the intersections of the interference stripes. 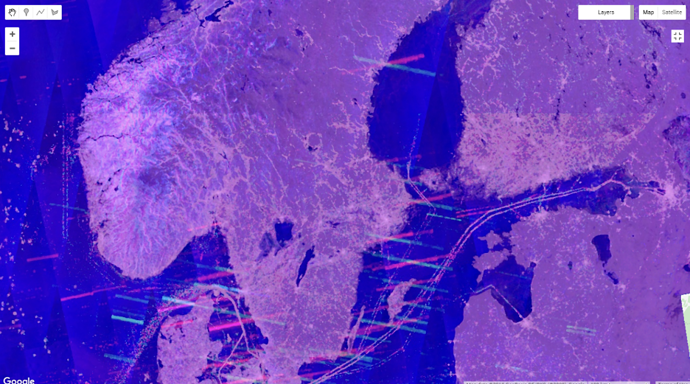 Here is the radar defending the Dimona nuclear facility in Israel’s Negev desert.

Continental-scale, railroad-era empires such as the United States, Soviet Union/Russia, and China have spent hundreds of billions of dollars over decades on satellite and airborne systems intended to pinpoint the location of potential adversaries’ defensive radar sites. Indeed, a little-appreciated component of stealth technology is knowledge of the location and capabilities of enemy radars in order to plot penetration paths to avoid them. Now, with open source imagery and a Web browser, anybody can get in the game.