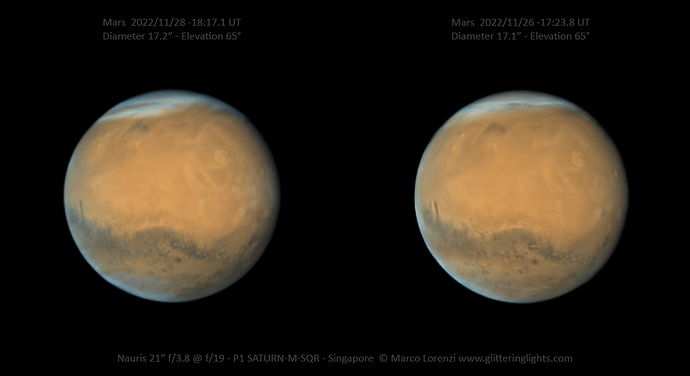 1100×600 181 KB
Two days apart, on 2022-11-26 and 2022-11-28, Marco Lorenzi photographed the planet Mars from a rooftop in Singapore. Both photographs were taken around the same Mars local time, but motion of the planet in its orbit changed the perspective as seen from Earth, creating a stereo pair which can be viewed with the cross-eyed method of freeviewing.

Here is my tutorial on cross-eye stereo image viewing from the Solar System Live help file.

Once you do the eyeball/brain magic to fuse the images, Mars will pop out as a sphere floating in space. You’ll notice, on further examination, that the stereo pair is imperfect in that cloud cover around the north and south poles of the planet has subtly changed over the two days, introducing changes unrelated to viewing angle. Note the enormous shield volcano, Olympus Mons, the largest known volcano in the solar system (and twice as high above “sea level” as Mount Everest on Earth), in the upper right of the images.

Here is my tutorial on cross-eye stereo image viewing

That was very helpful. Bringing a finger into view for just a few seconds was enough.