Max Tegmark: Probability of Imminent Global Nuclear War Is One in Six

Max Tegmark has posted an article on his “LessWrong” blog, “Why I think there’s a one-in-six chance of an imminent global nuclear war”, in which he presents a Markov-chain-like argument which leads him to the conclusion: “My current estimate is about the same as losing in Russian roulette: one in six.” This is drawn from the probabilities in the following chain diagram.

1250×475 35.7 KB
We are presently trapped in the loop in the middle between “Goliath winning” (breakaway provinces join Russia, acknowledged as a fact) and “David winning” (the insurgency is defeated and Russian troops withdraw). Between these stark alternatives, which the losing combatant now says is completely unacceptable to them, there are a variety of intermediate outcomes labeled with exemplars in the past and present. The other escape from the loop is an escalation by Ukraine leading to a nuclear detonation on its territory, whether meant as a warning or with military effect or civilian terror intended. Tegmark puts the probability of that at 30%. From this “kaboom” box, he estimates a 20% probability that Ukraine (possibly under pressure from its allies) would capitulate, leading to the “Kosovo” outcome—Russia wins. The 80% alternative is that NATO responds with a conventional attack on Russian forces in Ukraine and possibly outside. From this box, “Expansion”, he estimates a 30% probability of the Russians capitulating, leading to the “Vietnam” outcome of Russian defeat and withdrawal, and a 70% of progressing down the road outlined in Herman Kahn’s On Escalation.

Read the whole thing for his explanation of how he arrived at the probabilities assigned to the links in the chain and a discussion of the possible consequences of the worst-case outcome.

MIT professor Max Tegmark is a co-founder and current president of the Future of Life Institute, whose charter is to study and reduce global catastrophic and existential risks to humanity, particularly those associated with the emergence of artificial general intelligence.

If Ukraine was more like Japan. You know, not a corrupt as hell place that is the piggy bank of corrupt as hell Washington. I would be more in support of supporting them.

It is insane for the US to risk nuclear exchange for a proxy war on Russia’s boarder.
Now if the Europe has a dog in this fight it is in their neighborhood. Have at it.

NATO does not apply here.

The problem with this type of analysis is identifying all the potential paths. There are a lot (A LOT!) of other paths not included in that chain:

Zelensky overdoses on cocaine, replaced by a more moderate leader who negotiates a peace.
Complete collapse of the international economy as the dollar fails, leading to civil wars around the world.
Africans decides to move in block to Europe; Europe loses interest in the Ukraine.
Germany abandons NATO; US forces in NATO are ordered to make war on Germany; US forces in the US respond by fragging generals and march on the DC Swamp.
China launches attack on Taiwan; world forgets about the Ukraine.
Serbia decides to take back Kosovo; US runs out of weapons to send everyone.
Biden* has a heart attack, replaced by that woman who freezes and brings US government to a stop.
Not to mention weather, opportunistic terrorists, escaped bioweapons from the Swamp’s 30+ biolabs in the Ukraine.

But let’s take Tegmark’s 1 in 6 chance of global thermonuclear war as a reasonable estimate. That brings us back to the hoary old thought experiment of “Bill Gates Plays Russian Roulette”.

In the thought experiment, Bill Gates himself does not play Russian roulette – he pays other people to play while he watches. The situation is that the player gets the revolver with one bullet in the 6 chambers, spins the chamber, and pulls the trigger. It costs nothing to play. If the player survives, he picks up the money Bill Gates put on the table and walks away. The question is – how much money does Bill Gates have to put on the table before someone will play? One Dollar? A thousand Dollars? A million Dollars? More?

The economist says – the Expectation Value is always positive: +5/6 of the amount on the table - 1/6 of zero cost to play. Therefore, everyone should play.

People I have asked about this universally say that no amount of money would induce them to play. The downside outcome is unacceptable.

I guess that most people would say – if asked directly – that the lives of their nearest & dearest are more important to them than the entirety of the Ukraine. But note that the realistic prospect of global thermonuclear war is not even an issue in the upcoming US elections. Democracy is dysfunctional.

The problem with this type of analysis is identifying all the potential paths. There are a lot (A LOT!) of other paths not included in that chain:

The internal paths along the edges of the graph may be arbitrarily complex, but the leaf nodes are pretty distinct and inclusive of possible outcomes:

Each of the messy examples in the middle of the left column got there through very different and complicated paths, but share the outcome that in no case did either side get what they wanted. Finland only achieved its complete autonomy when the Soviet Union collapsed for reasons having nothing to do with Finland.

Markov chain analysis abstracts a complicated system by hiding all of the complexity within the nodes and edges and aggregating them entirely into the probabilities of transitions along edges. This is sometimes useful in clarifying thought about strategies in that sometimes you discover you have a lot of stuff on a branch to which you’ve assigned a low probability of reaching and thus which doesn’t merit a lot of attention unless the outcomes on that branch have disproportionate consequences.

the leaf nodes are pretty distinct and inclusive of possible outcomes:

The point about the “Bill Gates Plays Russian Roulette” exercise is to remind us that, in the real world, a situation experienced a single time will have a discrete outcome – not the probability-weighted outcome of a situation experienced a very large number of times. Thus, we need to consider the acceptability of each of those discrete outcomes in making a decision. If one of those realistic outcomes is the extinguishment of life as we know it around the world, perhaps Our Betters need a different approach to the civil war in the corrupt Ukraine.

The following isn’t a criticism of Tegmark’s schematic dynamics – I’m going at a metalevel. For all I know, Tegmark’s model may be the best anyone has produced.

But I have to admit that whenever I’ve come across anything from lesswrong.com* over the years, I bristle. Their reckless pseudo-intellectual treatment of Solomonoff Induction, if not the Hutter Prize itself, has played no small part in depriving humanity of a revolution in science that could have provided us with tools vastly more powerful than the schematic Markov-chain model offered by Tegmark. I won’t go into details about Algorithmic Probability, Markov Algorithms and Markov Chains because the connections are so well known as to be tiresome. But even more tiresome is the number of times I’ve seen long essays and response chains on lesswrong.com totally missing the critical point that Algorithmic Information Criterion for causal model selection is the tool we should be using in the era of Moore’s Law for investments, analogous to the Hutter Prize, to get very low risk and very high RoI causal models of macrosocial phenomena, including geopolitical dynamics.

The idiocy in this area combined with the appearance of intellectual superiority is, quite simply, nauseatingly pseudo-intellectual.

Let me head off a few misunderstandings that have led us to the brink of nuclear war:

All of the above have been erroneously thrown up as red-herrings by participants at lesswrong.com and this isn’t even a comprehensive list. There are other, far more idiotic “critiques” posing as intellectual heavyweight arguments.

*It just occurred to me that given two competing executable archives of macrosocial data, the one that is shorter is probably “lesswrong”. This quantitative treatment of randomness aka error is also a reason the timing of Popper’s “falsification” dogma could not have been more poorly timed given it drowned out the more nuanced notion used by Solomonoff.

Max Tegmark has posted an article on his “LessWrong” blog, “Why I think there’s a one-in-six chance of an imminent global nuclear war ”,

U.S. involvement in the Russia-Ukraine War, if we were still a traditional republic, would have died months ago – risk vs, reward is such that diplomacy for treaty makes the most sense.

Conservative Americans do not want to be involved, but Deep State, does. Could it be the money and power for defense contracts. That is too simplistic. Deep state could shoot its load in many, many “emergency” responses (eg as they did in Iraq, Libya, and Syria to name a few).

God willing the narrative will change November 9th, the day after the U.S. election day, if we do in fact dodge the 1/6th odds. Am I suggesting some in the deep state would risk nuclear war to hold on to or expand their power? No, I am not suggesting it – I am stating it.

Amazingly, most of the inhabitants of the world have no idea of the danger we are in.

God willing the narrative will change November 9th, the day after the U.S. election day,… 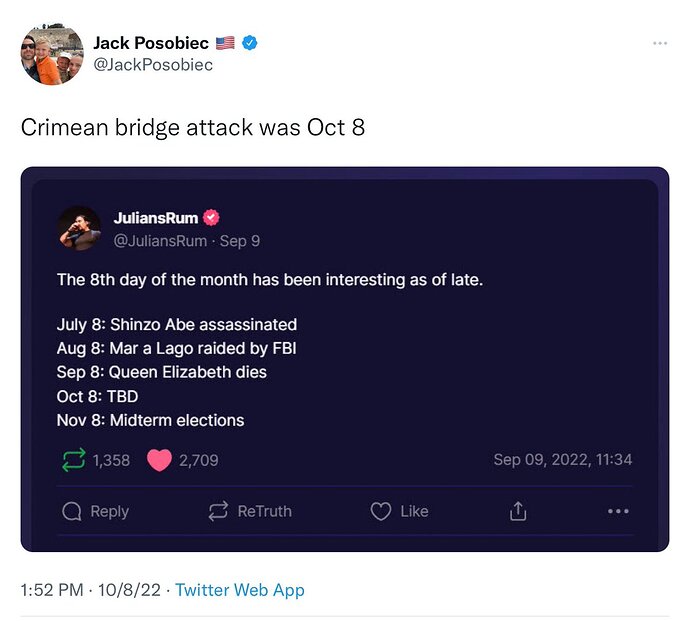 A gushy but informative documentary about the battle for Kyiv:

For things like this, I don’t see much value in trying t estimate the probability with precision. I just jump by orders of magnitude. If it is 1 in 10 or 1 in a hundred is there a difference in what we should be doing? How about 1 in 1000 and so on. In this case, it doesn’t matter. The only thing precision offers is knowing whether the West’s leaders are orders of magnitude worse than expected.