@ArthurB
Now's a good time to plug an awesome proposal for disposing of nuclear waste: literally, put it inside of a big tungsten ball. The waste heats the ball from the inside, the ball melts the ground underneath it and slowly sinks to the earth's core. https://t.co/scJD2KAljs 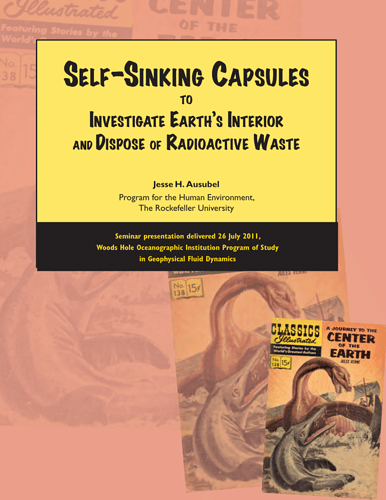 (PDF) Self-sinking capsules to investigate Earth’s interior and dispose of...

PDF | The concept of self-burying capsules can be adapted to super-deep disposal of the most hazardous waste. Deep self-disposal involves loading of... | Find, read and cite all the research you need on ResearchGate

Here is the 2011 paper, “Self-Sinking Capsules to Investigate Earth’s Interior and Dispose of Radioactive Waste”. Full text is available at the ResearchGate site. The first paragraph of the paper is:

Technical experts, science fiction writers, and environmental advocates have all famously considered a self-descending spherical body in a melting environment not as a solution but as a problem. In connection with nuclear reactor core meltdown, this phenomenon is the so-called China Syndrome. Let’s step back and consider the China Syndrome as a solution.

WIll the tungsten itself melt at some depth?

Tungsten melts at 3695 °K, and the estimated geothermal gradient puts the temperature of the outer core rising from 3000 °K at the top to 5000 °K at the boundary of the inner core, which continues to rise to 7000 °K at the centre. So, by this reckoning, the tungsten would melt somehere in the outer core. However, I don’t know how its strength changes with heat, so it might be disrupted by the pressure before that.

However, since the density of rock rises with depth, it’s more likely the descent would stop when the density of the surrounding rock equaled that of the capsule. The paper estimates that point as around a depth of 120 km, which the capsule would take around forty years to reach.