Since April of 2001, Michael Shermer, publisher of Skeptic magazine, has been writing a monthly column, ”Skeptic” for Scientific American. This run was terminated in January 2019, after repeated confllicts over whether “hate facts” (undisputed facts which are inconsistent with the slaver narrative) could appear in the pages of that once-august publication. In “Scientific American Goes Woke”, he recounts the story and further examples of Scientific American deciding which science Americans may see.

The most bizarre example of Scientific American’s woke turn toward social justice is an article published September 23, 2021 titled “Why the Term ‘JEDI’ is Problematic for Describing Programs that Promote Justice, Equity, Diversity and Inclusion.” Apparently, some social justice activists have embraced the Star Wars -themed acronym JEDI (Justice, Equity, Diversity and Inclusion) as a martial reference to their commitment, and is now employed by some prominent institutions and organizations such as the National Academies of Sciences, Engineering and Medicine. The JEDI acronym is clearly meant to be uplifting and positive. It isn’t, opine the authors of this piece that is clearly not in the satirical spirit of The Onion or Babylon Bee.

And now, in “The Complicated Legacy of E. O. Wilson”, Scientific American decides the “normal distribution” is “problematic”. 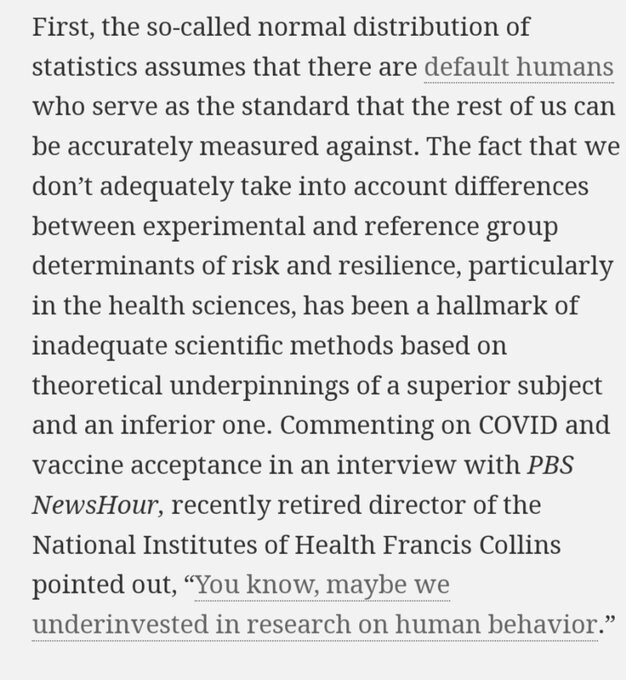 Perhaps some Scientific American writers and editors have underinvested in knowledge of basic statistics.

This publication has been a basket case for years. I’d been a decades-long subscriber, but finally cancelled over the climate pseudo-science. Too bad. It was the only publication besides the WSJ that I subscribed to, now they’re both goners. The good news is that there is access so much good stuff online now, like HERE, that I don’t miss them anymore.