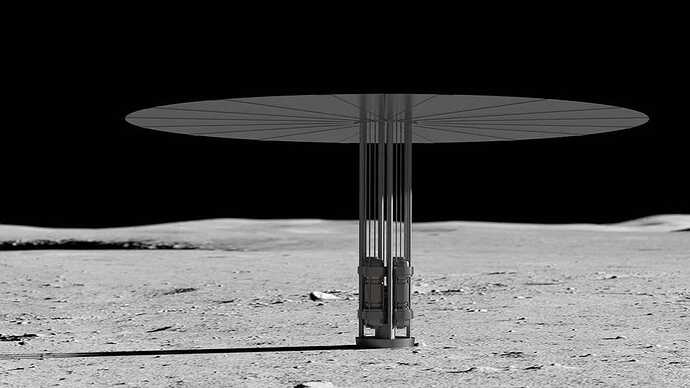 The winning concept would ideally be ready for launch by the end of the decade.

It is encouraging to see NASA finally acknowledging that nuclear power is essential for long-term habitation on the Moon and exploiting in situ resources and taking the first steps to develop it. One of the most formidable problems in operating on the Moon is the 14 day night and day cycle which not only makes solar power completely impractical for continuous power requirements, but creates the need for substantial power during the night cycle just for heating. Many lunar landers and rovers, although solar powered and operational only during the day, use passive plutonium-238 heaters just to allow the electronics and mechanical components survive the lunar night, when temperatures can fall below −200° C.

Steven D. Howe, over his twenty year career at Los Alamos National Laboratory, studied the “high energy path” to lunar development, assuming abundant nuclear power to exploit resources available everywhere on the Moon. In addition to research publications, he wrote a novel, Honor Bound Honor Born, which shows this strategy in use. From my review (linked above):

Most NASA design studies for bases have assumed that almost all of the mass required to establish the base and supply its crew must be brought from the Earth, and that electricity will be provided by solar panels or radiothermal generators which provide only limited amounts of power. (On the Moon, where days and nights are two weeks long, solar power is particularly problematic.) Howe explored how the economics of establishing a base would change if it had a compact nuclear fission reactor which could produce more electrical and thermal power (say, 200 kilowatts electrical) than the base required. This would allow the resources of the local environment to be exploited through a variety of industrial processes: “in-situ resource utilisation” (ISRU), which is just space jargon for living off the land.

For example, the Moon’s crust is about 40% oxygen, 20% silicon, 12% iron, and 8% aluminium. With abundant power, this regolith can be melted and processed to extract these elements and recombine them into useful materials for the base: oxygen to breathe, iron for structural elements, glass (silicon plus oxygen) for windows and greenhouses, and so on. With the addition of nutrients and trace elements brought from Earth, lunar regolith can be used to grow crops and, with composting of waste many of these nutrients can be recycled. Note that none of this assumes discovery of water ice in perpetually shaded craters at the lunar poles: this can be done anywhere on the Moon. If water is present at the poles, the need to import hydrogen will be eliminated.

ISRU is a complete game-changer. If Conestoga wagons had to set out from the east coast of North America along the Oregon Trail carrying everything they needed for the entire journey, the trip would have been impossible. But the emigrants knew they could collect water, hunt game to eat, gather edible plants, and cut wood to make repairs, and so they only needed to take those items with them which weren’t available along the way. So it can be on the Moon, and to an even greater extent on Mars. It’s just that to liberate those necessities of life from the dead surface of those bodies requires lots of energy—but we know how to do that.

With the recent discovery that there may be usable water widely distributed on the lunar surface and not just in shadowed craters at the poles, this approach looks even more viable.

It is encouraging to see NASA finally acknowledging that nuclear power is essential for long-term habitation on the Moon and exploiting in situ resources and taking the first steps to develop it.

Equally, there is a strong case that nuclear power is essential for long term civilization on the Earth. Without a source of power, history shows us that life on Earth for humans was nasty, brutish, and short. We understand that fossil fuels are limited, so-called “renewables” are net energy sinks, and nuclear is the only currently viable long-term alternative. But Our Betters chose to ignore this.