This notice is issued by the National Aeronautics and Space Administration (NASA)/Johnson Space Center (JSC) to solicit responses from interested parties to gauge industry’s capabilities to provide deorbit capabilities for the International Space Station (ISS).

Per ISS International Partner agreement and request, NASA is issuing this Request for Information (RFI) to assess industry’s capability to design, develop, manufacture, launch, and provide the on-orbit operation to enable a controlled re-entry and the safe deorbit the ISS.

The deorbit vehicle shall attach (via docking or berthing) to the ISS at least one (1) year prior to the planned ISS reentry date to enable adequate time for on-orbit tests and checkouts. ISS altitude lowering can occur naturally via atmospheric drag or via Russian propulsive control from the deorbit vehicle rendezvous altitude to the final circular holding altitude at approximately 270 km, where maneuvers will be performed as necessary to establish proper ground tracks prior to the final deorbit burn sequences. Below 270 km, a combination of natural decay and/or propulsive maneuvers will reduce the ISS perigee to approximately 150 km. Shortly thereafter, the deorbit vehicle will perform the final reentry burn resulting in a controlled reentry of the ISS within a pre-defined, uninhabited entry corridor. Throughout the final series of deorbit events, the deorbit vehicle will be responsible for providing both delta-v and attitude control of the ISS.

Although nominal ISS EOL is late 2030, the Government requires that this deorbit capability be available as soon as possible to protect for contingencies that could drive early re-entry and beyond 2030 in the event of further ISS mission extensions.

The document goes on to spell out requirements for the vehicle to be docked to the station to perform the deorbit burn, including:

Attached is a document, “[ISS Deorbit Concept of Operations](file:///home/kelvin/ISS+Deorbit+USOS+Concept+of+Operations+Overview.pdf)” [PDF], which is a set of briefing slides. The document assumes that a combination of propulsion from the Russian segment of the station and atmospheric drag will perform the initial orbit lowering before the deorbit vehicle makes its final burn before the Big Burn. 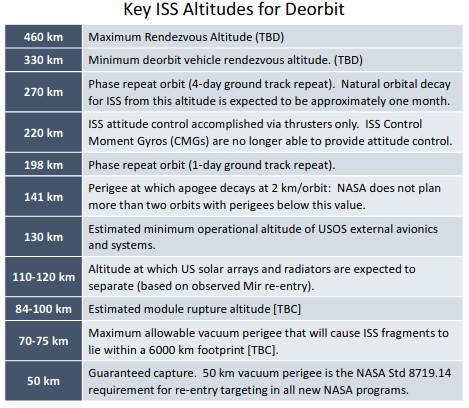