On 2022-12-05 the National Ignition Facility (NIF) at the Lawrence Livermore National Laboratory in California fired 192 pulsed laser beams delivering 2.05 megajoules of energy at a tiny capsule of deuterium-tritium fusion fuel, imploding it and initiating a fusion reaction which released 3.15 megajoules (0.875 kilowatt hours) of energy. This was the first time a laboratory inertial confinement fusion reaction released more fusion energy than was input to heat and compress the fusion fuel, an event defined as “ignition”, and a milestone which the NIF has been seeking since the start of the project in 1994.

However, this success, net fusion energy output, is a long way from being a practical energy source. While the fusion reaction produced more than 50% more energy than the laser beams that initiated it, charging the lasers prior to the shot required “about 300 megajoules” of energy from the electric grid, so the fusion energy gain factor achieved what is termed “scientific breakeven” (fusion power greater than heating power), but more than two orders of magnitude below the criterion of engineering breakeven (fusion generates enough power to sustain the reaction), not to speak of economic breakeven (selling enough electricity generated from fusion to cover the capital and operating costs of the generator).

Still, this is a milestone that fusion researchers have pursued for seven decades, and it validates the concept of laser-driven inertial confinement fusion.

On 2022-12-13, the U.S. Department of Energy presented the results to the public and media at an event in the imperial capital of Washington. Here is a video of the presentation. The first 28 minutes consist mostly of bureaucrats and politicians congratulating themselves on spending taxpayers’ money and are remarkably content-free. At the 42:36 mark in the video, a technical panel describes the experiment, details of the shot that achieved scientific breakeven, the diagnostics used to understand the reaction, and the implications for further fusion research, applications to nuclear weapon stockpile stewardship, and prospects for fusion power in the future. I use the video from the London Telegraph because it is the only one I’ve found that includes the technical panel, which is well worth your time to watch.

While laboratory fusion experiments are often described as creating the conditions at the core of the Sun, in fact they are very different. The Sun’s core, where fusion occurs, produces power at the rate of about 276.5 watts/m³, which is comparable to an active compost heap. The Sun produces such a large amount of energy only because it is so huge and has very low thermal conductivity, trapping the energy that drives fusion. While the temperature at the core of Sun is around 15 million °K, the National Ignition Facility achieves temperatures around 100 million °K, compensating for the much lower density and confinement time compared to the Sun in order to achieve a Lawson criterion that permits fusion ignition.

Still, this is a milestone that fusion researchers have pursued for seven decades, and it validates the concept of laser-driven inertial confinement fusion.

Progress has been so slow that unless this involved a radical technical departure, the concept of diminishing marginal return suggests it is a wild goose chase.

This is addressed, in part, at 1:11:57 in the video, noting that NIF is a research instrument built largely with technology from the 1980s and 1990s. Simply applying currently available laser, pulsed power, electronics, computing, and software modelling technology would increase efficiency. Understanding the conditions needed to achieve ignition (in particular, fabrication of the targets) allows optimisation for energy production and research into methods of mass production at an affordable price.

And then there is the challenge of transforming the shower of neutrons & alpha particles into useful energy, such as electric power. That probably limits the useful output to about a third of the energy released in the reaction – and that is before considering the long-term costs of safely disposing of the equipment that will have been activated (become radioactive) due to neutron bombardment.

Some have argued that this announcement is a slight-of-hand request for additional funding for what is really one of the few practical ways of studying hydrogen bomb physics in a world with test bans.

The late Bob Bussard endorsed my legislative language to replace the fusion program with a series of prize awards.

Look, guys, are we really supposed to believe anything a government technology program claims nowadays? Come on.

My understanding is that most of the rest of the world’s interest in pursuing fusion as a source of energy is using a completely different architecture - with both ITER and DEMO using tokamaks on a scale that is literally comparable to larger multiples of the CERN LHC and far larger than the NIF.

It’s hard to ignore the supposition that this success is conveniently connected with the desire to secure continued or increased funding, particularly since - as John notes - the facility is older and uses obsolescent equipment such as lasers, computers, etc. And new efficient lasers don’t exactly grow on trees, you know.

The early FT reporting on this included this bit lost in the detail since that made me suspect that perhaps the “damage” may have affected the accuracy of the measurements. 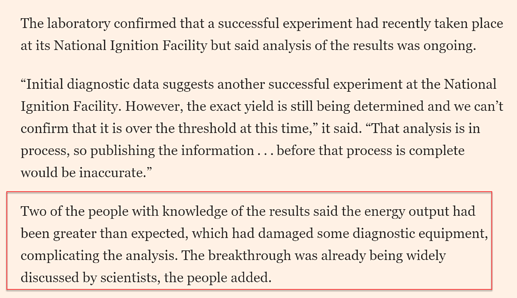 The “smart alec” in me: “how many California windmills did it take to energise the laser(s)?”

Will probably become commercially profitable when the Browns win a Super Bowl (read: not in my lifetime). But like a true Browns fan I will also stay tuned to progress on Nuclear Fusion!

Here is a ChatGPT style answer

Larry Lemke is working on a table top fusion experiment but I do not have the details.

Anton Petrov does a pretty good job of placing the flurry of “break even” news in perspective from a technical angle. The larger question is whether governments are the right entities to manage technical risk.