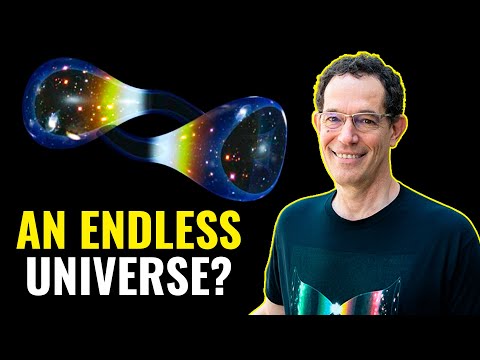 Neil Turok was director of the Perimeter Institute in Canada from 2008 through 2019 and now holds the Higgs Chair in Theoretical Physics at the University of Edinburgh. His work has focused on the early universe, and in the early 1990s he predicted structure in the cosmic background radiation which would be confirmed by the WMAP spacecraft more than a decade later. More recently he has explored alternatives to the standard Big Bang theory, including the ekpyrotic universe and other cyclic models.

In this wide-ranging two hour conversation, he explains how he has become convinced that the universe may be a much simpler place than physicists have been assuming, characterised by just five numbers, and that physicists may have been barking up the wrong tree making more and more complicated models to try to fit the observational data instead of stepping back and asking whether there are fundamental reasons the data must be what we observe, grounded in simple principles such as the laws of thermodynamics. He describes his current work, which seeks to explain the properties of the early universe without resort to special conditions at the Big Bang or mechanisms such as cosmic inflation, which require adding another whole layer of complexity for which no observational evidence has emerged over the decades.

So, having read Stephan Meyer’s book, which reviews the data AND contortions to make it fit preconceived notions, ?how does this vary from Meyer. L

At over two hours, this video is quite a commitment of time. And Prof. Keating is presumably a much better physicist than interviewer – it seemed that every time Dr. Turok was getting to a really interesting point, Brian Keating would throw in some irrelevancy. Despite that, this video deserves a repeat viewing.

Dr. Turok has so many interesting ideas! The antiverse. The possibility that dark matter consists of neutrinos. The speculation that anti-particles are normal particles moving backwards in time. The potentially finite nature of the universe. There is much to ponder in this interview. It is unfortunate that Dr. Turok’s book is now several years behind his current thinking.

One philosophical thought triggered when Dr. Turok shows his equation that completely describes the wave function of the Universe (except that we can’t solve it without invoking approximations & simplifications): Is there any reason why the universe should conform to abstruse mathematical equations?

One counter would be that the universe obviously does behave in accordance with mathematical Laws of Physics. Fair enough. But could that simply be a coincidence? After all, Sadi Carnot derived an accurate equation for the theoretical maximum efficiency of a heat engine based on a totally fallacious understanding of the nature of heat.

It seems that the bleeding edge of physics blends into philosophy – and leaves us regular mortals severely confused!

Is there any reason why the universe should conform to abstruse mathematical equations?

Eugene Wigner posed this question eloquently in his 1960 article, “The Unreasonable Effectiveness of Mathematics in the Natural Sciences”. (An imperfect transcription is available here.)

The miracle of the appropriateness of the language of mathematics for the formulation of the laws of physics is a wonderful gift which we neither understand nor deserve. We should be grateful for it and hope that it will remain valid in future research and that it will extend, for better or for worse, to our pleasure, even though perhaps also to our bafflement, to wide branches of learning.

And there’s no obvious reason to expect that this would be the case. Many sciences are, paraphrasing Richard Feynman, not about “how does it work?” but “how did it get that way?”. For example, geology and biology are not based upon mathematical laws but rather figuring out how things developed over long expanses of time when they could have come out entirely differently due to small changes along the long history.

Even in astronomy, sky watchers from the ancients through Kepler tried to figure out mathematical laws that would explain the configuration of the solar system. Now we know that the sizes and orbits of the planets are just how the game of cosmic billiard balls happened to end up here, and that other solar systems, based on knowledge of thousands of exoplanets, can be and are radically different. There’s no mathematical law that explains the size, composition, and orbit of Earth’s Moon. It’s as it is because the young Earth got whacked by a Mars-sized planetoid and the debris condensed into the Moon. Make a tiny change to the planetoid’s orbit and there would be no Moon or an entirely different one.

This makes the “unreasonable effectiveness” of mathematics in the “how does it work?” sciences even more of a mystery.

In Our Mathematical Universe, Max Tegmark suggests that mathematics describes the fundamentals of the universe so well because the universe is essentially made of mathematics and goes further to ask whether the multiverse may contain realities built upon other kinds of mathematics than our own.

Of course, if the simulation hypothesis is correct and we’re living in a computer simulation, we should expect it to follow simple, predictable rules that a computer can execute.

After all, Sadi Carnot derived an accurate equation for the theoretical maximum efficiency of a heat engine based on a totally fallacious understanding of the nature of heat.

And the entire scientific and engineering field of fluid mechanics is based upon models (the Navier-Stokes equations) which entirely ignore the molecular structure of liquids and gases and the electromagnetic interactions among their molecules which are responsible for all of the phenomena it studies. This is an example of an effective theory, which is useful to study and predict behaviour of systems under certain conditions, but makes no claim to be fundamental and will break down beyond its limit of validity.

Some physicists believe our so-called fundamental theories such as the standard model of particle physics and general relativity are effective theories that describe the low-energy behaviour of something else which may be much simpler that underlies it all. Stephen Wolfram’s Wolfram Physics Project is one effort to find such a lower-level fundamental theory that might explain things we now consider as “just the way things are” such as why there are three dimensions of space.

Seems to me the fundamental error is in thinking the laws of physics, math, etc. explain things. I believe they only “describe” the behavior of things; explanation requires intelligence to see the relevance. The various laws show relationships; they do not provide data - only mechanisms. The real question is where is the data come from. DNA is a great example of just that.

A scientific society pursues success in the world by leveraging, generating data, and identifying symmetries in the data with the joint purpose of maximizing the benefits of data and minimizing the costs of data (computation and storage).

There are different leverage points here:

But I’d invoke the ‘all laws are wrong but some are useful’ maxim in Platonically separating truth from what we make of the world.

I would submit that while the “scientific community” pursues laws and other observations, they apply no rational thought to what they uncover. Else long ago they would have abandoned their atheistic stance and admitted at least the deistic explanation for all their “observations” to date. One cannot come to a different conclusion rationally.

That is a very good summary.

One thing that makes me go hmmm is that you remain in good standing in the scientific community if you argue we live in a simulation, but not that there is a God. Anything is accepted except the universe was created by a God. . Just one of an infinite numer of Earths in an infinite number of universes. Ok. Aliens planted us. Possibly. Created by a teen from the future. Maybe. But the teen isn’t a God

But the teen isn’t a God.

But that’s the funny thing about the simulation hypothesis: the teen is a God by all of the standard definitions of deity.

The only difference is that many (but not all) religions assume humans may have a personal relationship with the deity. Most descriptions of the simulation hypothesis assume something like Newton’s concept of a God that starts the great machine running and then it’s hands off from there, but there’s no reason the creator of a simulation could not interact with individuals within it, for example giving revelations to some, or bringing those who began to figure out what was really happening into an inner circle of enlightenment in exchange for keeping it quiet. There are a number of stories in various scriptures and the histories of religions that this might explain.

Exactly. That is the thing that makes me go hmmm. The computer simulation theory is saying there is a God and yet if you leave the simulation part out then you believe in the great man in the sky.

If the simulation theory is correct, then it is only acceptable to the atheist believer in simulation if it is a computer. So place this person in the year 1900 when they could not contemplate a computer and then what? So given that the simulation theory could be just as correct before or after we had computers, you would think there might be some acceptance of the possibility that it is something besides a computer that cannot be clear to us given the thing to be learned has not yet learned.

Wow. Sorry about that. I started to get the feeling I get when I read a liberal judge’s spaghetti logic.

Let me say that a bit clearer. Some people that believe in the computer simulation or at least not criticize it will ridicule a Christian when there is little to no difference between the two beliefs.

For sure there is no reasons that the teen (hopefully, of color & transgendered) could do that. But I have a different suspicion: human beings – indeed, all life forms – are merely an unanticipated effect of some arcane piece of coding in the simulation. After all, there would be no need to simulate an entire universe if the aim of the teen’s science fair project was to investigate “intelligent” life.

Presumably, the point of the simulation would be to demonstrate big things – the formation of galaxies, the collision of black holes … things that would take place over time periods corresponding to an almost infinite number of human generations.

The unsatisfying feature of the teen science fair project explanation of the universe – it does not tell us where that transgendered teen of color came from?

But I have a different suspicion: human beings – indeed, all life forms – are merely an unanticipated effect of some arcane piece of coding in the simulation.

This was one of my signature blocks for USENET in the 1990s:

“Meaning of life,” God chuckled, “I was just doing a physics experiment and suddenly all you guys popped out.”

What about viewing God more in the evolutionary function of a religious society pursuing success and less in the scientific society identifying symmetries?

There are many benefits to adopting God(s):

As a result, God(s) have kept re-emerging as a concept across the world, an element of consilience - also present in human affinity for conspiracy theories.

The concept of God leverages human biases and instead of fighting them leverages them to foster a more successful society.