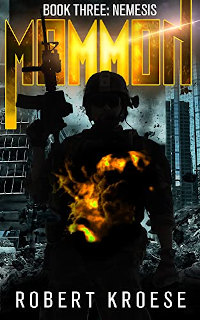 Nemesis, the third and final book in Robert Kroese’s Mammon trilogy, was published today at Amazon.com. At this time, only a Kindle edition is available. The book is not presently listed as available under the Kindle Unlimited program, as are the first two volumes. Since the book has just been listed, this may change.

As background, here are my reviews of the first two books.

At this writing, the Kindle edition of Titan is available for just US$ 0.99, or free on Kindle Unlimited.

Nemesis is a satisfying conclusion to the Mammon saga. Starting in the aftermath of the bombardment of the Earth by fragments of the asteroid named Mammon, the race is on between the two surviving, although seriously damaged, one-time superpowers, the U.S. and China, for the trillions of dollars of wealth in rare platinum group and rare earth metals that rained down, largely on Africa. Not only is the U.S. bankrupt and governed by a post-coup acting president whose legitimacy is disputed, it is less “United” than the name implies, with some states already having seceded and other likely to follow. Still, it has enough of a military remaining to roll the dice and try to seize control of the wealth in Africa.

China is playing the great game in a continuation of its pre-existing strategy in Africa, by building infrastructure and offering development aid in return for access to the wealth now lying in craters across the continent.

The survivors of the last-ditch rocket base in Libya are regrouped in the Castle in the Libyan desert, trying to survive and thread their way between the forces of the U.S., China, and two rival jihadist groups now working together to seize the treasure. They conclude that victory by any of those forces would only result in continuation of the centuries-old tragic story of the wealth of Africa being looted for the benefit of others and devise a structure based upon the technology of blockchain and smart contracts to provide a distributed and auditable chain of custody for fragments of what has come to be called “mammonite” that rewards everybody in the chain from discovery to ultimate use of the material, spinning off funds to support the Castle and the operators of the system. This is viewed as a dire threat by all of the powers that be, who mobilise their assets to try to stop it.

Once again, Robert Kroese has melded together science fiction, techno-thriller, military adventure, geopolitics, and cutting edge innovation in finance and economics into a story which will both keep you turning the pages and stop to think through the implications for our own world which seems to spiraling into a chaotic mess even without the aid of an asteroid impact.

I read a pre-publication copy of the novel made available to Kickstarter backers who supported its development, among whom I number.

Have it on my Kindle and am looking forward to reading it.