Eggplant Parmesan, also called “parmigiana di melanzane” or just “parmigiana”, is a classic Italian dish with its origins in southern Italy and Sicily. It is made from sliced eggplant (aubergine, Solanum melongena ) which is traditionally fried in oil (sometimes first being dipped in beaten eggs and dredged in flour or breadcrumbs), then layered with cheese (usually a mix of mozzarella and a smaller amount of grated parmesan cheese), and a tomato sauce with customary Italian seasonings such as basil, oregano, and bay laurel leaves. Properly made, this dish is delicious, with a variety of textures and flavours to savour in every bite.

Properly made, it is also absurdly time-consuming and fussy to prepare, leaves a kitchen littered with things to clean, and is difficult to justify making unless you’re trying to impress grandparents from la madrepatria. I used to buy microwaveable “heat and eat” versions of this dish which were good enough for this programmer, but sadly, they are not available where I now live, which is hundreds of times closer to Italy than where I used to enjoy them.

What to do? Well, it sounds like time to develop another improperly made FourmiFood “close enough for programmer chow” recipe, sacrificing authenticity for ease and speed of preparation, fault tolerance, and minimal clean-up in the aftermath. The result is what I call “Eggplant Parma-Sham”, which can be prepared in a fraction of the time, uses off-the-shelf ingredients, is made on the stovetop in a single pot, and is just as good re-heated as leftovers as freshly-made. On the downside, it looks like a dog’s breakfast, but it tastes just fine, very close to the real thing, and has the mix of textures of the classic dish. 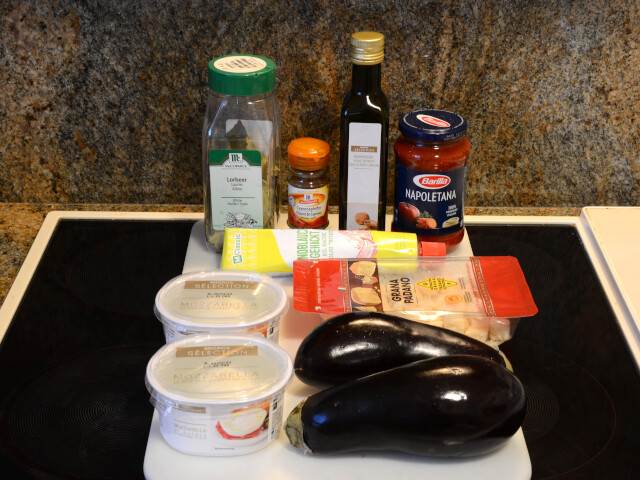 Assemble the ingredients. The quantities given make between one and two servings, depending upon how hungry you are and what you’re having with it. 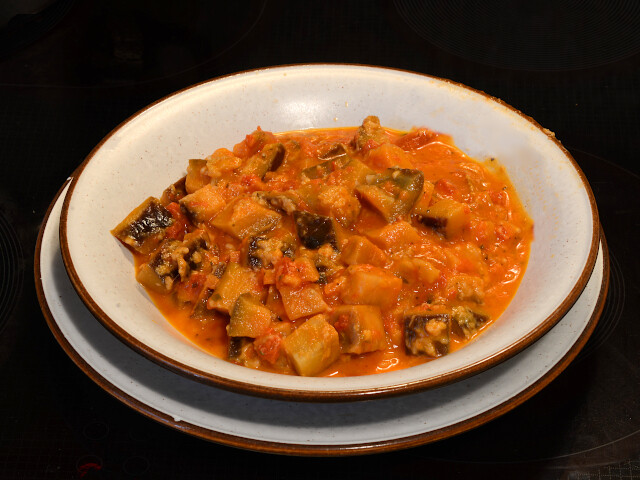 I will introduce Eggplant Parma-Sham to my wife, and see what she makes of it. I hope she has not adapted to Texas cuisine so much that she expands the time to prepare it by hours --by smoking it like a Texas Brisket !

Also, for your creative eggplant recipe, I suggest renaming it to Eggplant Perma-Parse.

This recipe is delicious— I have made it twice now. The second time, I added chorizo for extra protein and I thought it tasted good.

Looks great. I remember trying eggplant parmigiana once, as a bride. I tried it with slices of eggplant. No good: they sponged up all the oil instead of browning.

Ah, a known propensity of eggplant!

Did you try that recipe ever again?

I tried it with slices of eggplant. No good: they sponged up all the oil instead of browning.

This is why some recipes bread it with egg whites and bread crumbs before deep frying.