Vitello tonnato is a dish associated with the Piedmont region of northwest Italy, bordering Switzerland, and popular in regions where Piedmontese have settled, including Argentina, where it is considered a traditional Christmas dish. When you first hear of it, you may think it distinctly odd. Thinly sliced veal, served cold with a sauce made of, inter alia, tuna fish, anchovies, capers, lemon juice, garlic, and mayonnaise, doesn’t immediately strike one as toothsome, but most who try it conclude that it works, the different flavours in the sauce complementing one another and producing a unique taste that enhances the otherwise somewhat bland veal.

For years, I had been making, as one of my regular meals, a simple yet hearty and tasty dish consisting of fettucini or tagliatelle pasta (like spaghetti, but long flat noodles rather than round) tossed with cubed smoked salmon, chopped green onions (scallions), lemon juice, butter, creamed horseradish, and a store-bought topping which varied from creamed salmon (rarely available), lemon-butter (

One day in the early 2000s, I was in the store looking for sauce to make this dinner and happened upon a “seasonal special”: ready-to-use vitello tonnato sauce. Having previously enjoyed the veal dish, sold ready-to-eat, on summer days, I decided, on a lark, to give it a try. It was magnificent! The mix of flavours was much better than anything I’d tried before, and I decided this was the way go.

Then, of course, as seems to be the case whenever I discover something in the supermarket that I really like, it disappeared at the end of the “season”, never to be seen again. It became clear that if I wanted to enjoy this chance discovery once again, I’d have to make my own sauce from scratch, as we’re about to do here. It’s not much of a bother, doesn’t take long, and won’t require a lot of cleaning up afterward. Plus, you can make the sauce in advance, refrigerate it, and have it ready to go whenever you decide to throw together the pasta dish.

The sauce recipe here is bog-standard vitello tonnato sauce (although you’ll see variations in different recipes) and can be used in many recipes other than this pasta dish. Heck, you can even put it on thinly sliced veal! I find it is a particularly delicious sauce for crudités (bite-sized assorted raw vegetables), and it should be excellent as one of the dips served with fondue chinoise (hot pot with thinly sliced meat). 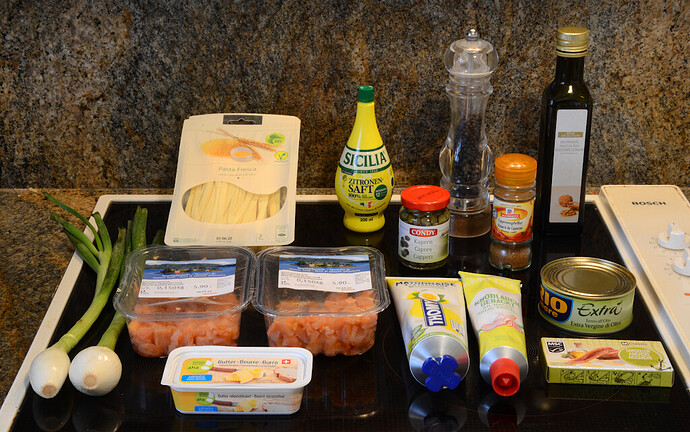 Let’s go to the kitchen and get started. Above are the ingredients for the complete dish. The quantities given make around two servings, depending upon how hungry you are and what you’re having with it. Because you may want to use the sauce in other recipes, I’ll list the ingredients and provide instructions separately for the sauce and pasta.

You can make the tonnato sauce earlier, like the day before, and store it in the frigo until you’re ready to prepare and serve the main dish. This cuts the final preparation to just boiling the pasta and cutting up the green onions and salmon (if not already cubed). I use “tbsp” (tablespoon) to denote a volume of 15 millilitres and “tsp” (teaspoon) for a third that (5 millilitres). It’s cooking , not chemistry—don’t obsess on exact quantities! 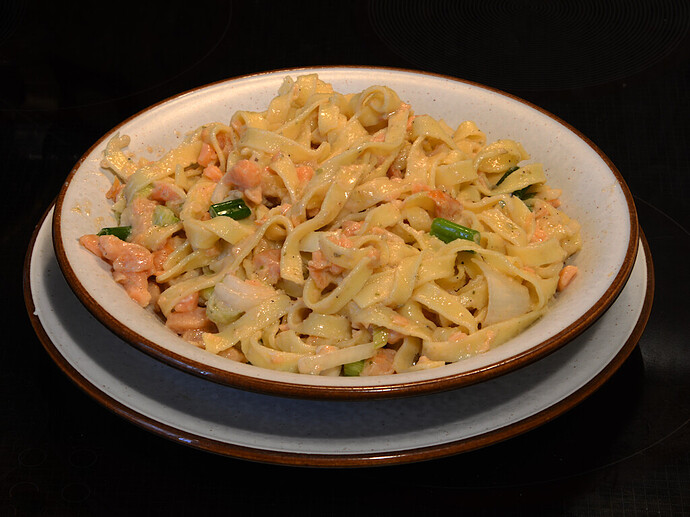