Here is my review of Prof. Bostrom’s 2014 book, Superintelligence, where I first encountered the “clippy apocalypse”, which he invented. 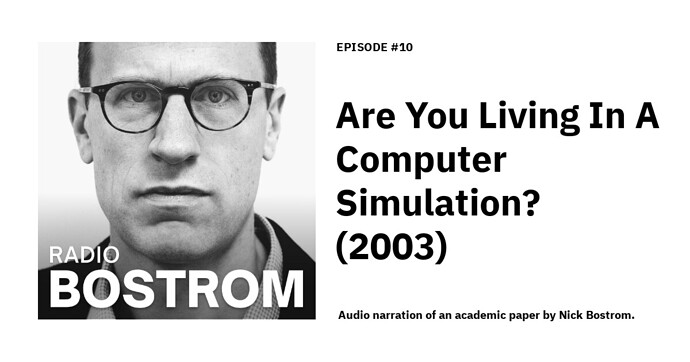 Are You Living In A Computer Simulation? (2003)

This paper argues that at least one of the following propositions is true: (1) the human species is very likely to go extinct before reaching a “posthuman” stage; (2) any posthuman civilization is...

From the book review:

Biology never produced something like a steam engine, a locomotive, or an airliner.

If biology didn’t produce those technologies, what non-biological system on planet earth did? If human artifacts are not the productions of biology, what did produce them?

What do we call the bigger-than-biology umbrella that incorporates everything that we came from and everything that eventually will come from us, from biology to (presumably non-biological) superintelligences? Can we identify it as anything less than just “the universe”?

As for superintelligences that might wipe out humanity, why do we humans view our current corporal forms as privileged? Hubris? Would we not better view ourselves as a tiny and almost insignificant step in an ongoing chain of development that will produce an endless stream of beings that look nothing like us? Maybe we’re the end of the biological portion of this larger system, but why should the end of biology be the end of the system? To the imagined superintelligences of the future, we humans may be as important as ancient single-celled organisms are to us: nothing more than a tiny step along a developmental chain that we didn’t invent and certainly don’t control.