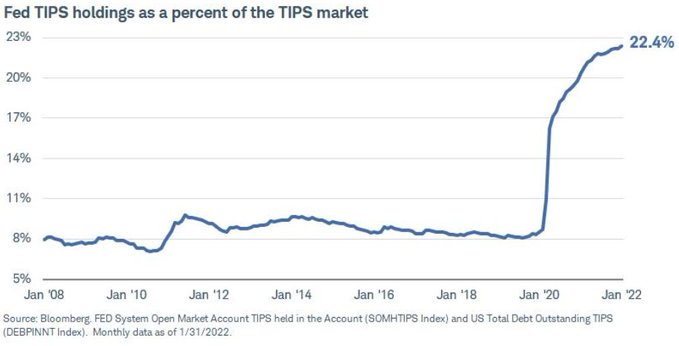 Fixed-income securities such as bonds and shorter-term debt instruments such as Treasury notes and bills are a sucker bet in times of inflation because, over the term of the bond, the purchasing power of the money in which it is denominated and the interest it pays decreases, meaning when the principal is repaid, it is worth less than what you paid originally for the bond. In times of rising inflation, the interest payments will not usually make up for the loss in principal. So, not only have you lost the use of the money for the term of the investment, you’ve also lost purchasing power: lose-lose.

Consequently, investors are wary of bonds when inflation is on the horizon which, in the era of funny money backed only by the integrity and honesty of politicians ushered in by the destruction of the gold standard by the United States in 1971, it almost always is. To invite (or, it you like, sucker) investors into buying its debt, the U.S. Treasury created instruments called “Treasury Inflation-Protected Securities” (TIPS), in which the face value and interest payments on the bond are indexed to inflation by the Consumer Price Index (CPI), supposedly providing a shield from inflation by adjusting the pay-outs to compensate for erosion in the purchasing power of the money. (Of course, since the Consumer Price Index has been the subject of jiggery-pokery to understate inflation since the 1980s, this is also a scam, but we’ll set that aside for the moment.)

What is delightfully ironic is that when, starting in 2020, the U.S. Federal Reserve went on a wild bender of money printing through the instrument of buying U.S. Treasury securities with “dollars” made up out of thin air, they put a substantial part of this into TIPS, increasing their share of the total TIPS outstanding from around 8% to 22.4%.

So, what happens when the Federal Reserve buys “inflation protected securities”? Think about it: the U.S. Treasury, at the behest of its political masters, spends money it doesn’t have on things politicians like but aren’t willing to raise taxes to pay for. This creates mountainous deficits, which must be funded somehow. Private investors, responsible for their own money or funds entrusted to them as fiduciaries, are insufficiently stupid to buy Treasury bonds to cover the gap, so the Federal Reserve, at the behest of its political masters, creates new money out of thin air (as trends analyst Gerald Celente says, “money that isn’t worth the paper it isn’t printed on) and uses it to buy these Treasury bonds. But it doesn’t just buy plain old bonds—it buys TIPS, whose principal and interest payments increase with inflation.

But what is inflation? As Milton Friedman said, “Inflation is always and everywhere a monetary phenomenon.” Inflation is simply an increase in the money supply, which is precisely what the Federal Reserve is doing when it summons “dollars” from the void to buy these TIPS. But since they’re “inflation protected”, as the inevitable inflation created by the money printing kicks in, the value of the TIPS held by the Federal Reserve will increase, and the Treasury will need more “dollars” to pay the interest and principal upon maturity. So where do those “dollars” come from? By selling more TIPS to the Federal Reserve, of course!

This is the fairy castle behind the “everything bubble" that began in 2020. The newly created money tends to flow first into liquid assets, driving bond yields down and equity (stock market) prices up. Then it gushes into the general economy and is seen in consumer prices, energy prices, real estate, durable goods such as automobiles, and finally in wages and salaries as workers demand raises to cope with the rising prices of everything. We are now coming into the final phases of this cycle, which closes upon itself as government response to rising prices results in more money printing.

It would be hilarious if it weren’t all so tragic for those who work hard and save.

We are now coming into the final phases of this cycle, which closes upon itself as government response to rising prices results in more money printing.

Lenders will lose, of course. Those who have pieces of paper saying there is a (maybe rehypothecated) piece of gold in a London vault with their name on it – they lose. Those who hold physical gold will find the descendants of FDR’s stormtroopers at their door, armed for bear and demanding the surrender of that gold (in the public interest, of course). Those who have gold in their own safe deposit box in a far-off country – Good Luck!

History says the key to survival is having useful goods to barter – food, cigars, ammunition, etc. History also says that eventually things get better – countries can survive bouts of extreme inflation … sometimes. But we have never had a situation before in which the countries of the West are so dependent on the imports of goods from the East. When those necessary imports drop to the level which can be paid for by bartered exports, and we no longer have the physical plant and worker skills to manufacture them locally, we really will be in a new situation.

we really will be in a new situation.

Some believe that mankind can recover from any setback because the knowledge will be retained. From a materialistic aspect, I have my doubts.

Using a video game as an analogy: In a role playing game, you start with next to nothing and you build your skills, abilities and items in a progression. You fight level 1 critters until you can fight level 2 critters. Along the way you gain knowledge. You learn what specific items or methods to use to get past level 10. If you restart the game, you can zoom through the levels applying that knowledge. What if there is a twist? What if you get to the level 4, but the level four critters are actually level 6 critters? You cannot progress. You have all the knowledge to beat level 6 critters, but you could not acquire the items by beating the level 4 and level 5 critters.

Getting resources out of the earth required to progress like our history will not be the same. Resources will not be as easily acquired. If you cannot get enough oil (for example) to progress to a point of drilling the deep well, all the knowledge of how to do it is useless.

As you properly point out, the recovery of just the US economy requires a complex set of capabilities. It would be an entirely new set of initial conditions and I am skeptical it can be done again.

As you properly point out, the recovery of just the US economy requires a complex set of capabilities. It would be an entirely new set of initial conditions and I am skeptical it can be done again.

A similar situation was the central premise of Larry Niven’s Ringworld, where the civilisation of the engineers who built it had collapsed due to a contagious failure mode that destroyed their technology. They did not have the ability to replace the machines without the machines that had been destroyed, resulting in the collapse.

Shortly before Niven wrote the novel, the semiconductor industry had been stricken by “purple plague”, which turned out to be due to formation of an intermetallic compound of gold and aluminium where wires were bonded to chips. This was originally quite mysterious and caused unexplained failures of chips which originally tested perfectly and were run within specifications. This got Niven thinking about the consequences of such an event when civilisation was entirely dependent upon microelectronics and could not make chips without devices that themselves used chips. We are now, in fact, in precisely the situation Niven imagined in 1970. If we lost all of our microelectronics, it’s unlikely, even knowing that it was possible and how it was done, that in the aftermath of the economic collapse it would create, the trillions in capital and fifty years of bootstrapping to get back to where we are today could ever be done.

If we lost all of our microelectronics, it’s unlikely, even knowing that it was possible and how it was done, that in the aftermath of the economic collapse it would create, the trillions in capital and fifty years of bootstrapping to get back to where we are today could ever be done.

There are two countervailing forces active in this situation. One is the huge productivity gains we enjoy from specialization – which carries the downside risk of societal failure if any of those specializations are lost. The other is the growing global dissemination of technology – making computer chips in Mongolia, fracing oil wells in Argentina. An analogy might be that the Western Roman Empire collapsed – while the Byzantine end of the Roman Empire trundled on for centuries.

At the individual level, the people best placed to survive the coming economic collapse are those who can grow food, make things, provide essential services, or at least barter useful products. At the geopolitical level, the countries or regions best placed to survive are those which can continue to grow food and manufacture required items. I doubt that will be us in the West. But I remain optimistic about the long-term future of the human race.