In a paper published in Acta Astronautica, “Late-time small body disruptions for planetary defense”, six researchers report simulations of detonating a one megaton nuclear weapon a few metres from the surface of a 100 metre diameter asteroid on an Earth impact trajectory just two months before impact. Here is a hydrodynamic simulation run on a supercomputer at Lawrence Livermore National Laboratory. They find that disruption of the asteroid and the deflection that would result from it will cause 99.9% or more of the asteroid’s mass to miss the Earth. For a larger asteroid, where dispersal velocities would be ten times lower, a detonation six months before impact would still cause 99% of its mass to miss the Earth. This is detailed in a Livermore popular article, “Late-time small-body disruptions can protect the Earth”. (The Acta Astronautica paper is behind an Elsevier paywall which wants US$ 9.50 to “rent” the content to read for 24 hours, and does appear to be on arXiv or posted on SciHub.)

Now, the best way to divert an asteroid headed for Earth is to predict the impact years in advance, then give it a gentle push by something like a gravity tractor. With early detection, only a delta-v on the order of 1 centimetre per second would suffice to change an asteroid’s orbit so that it would miss the Earth and be deflected by the fly-by into a safe orbit. But it’s nice to know that if we don’t have that early warning, there’s a “plan B” which can mitigate the consequences of an impact.

It’s interesting that when the last B53/W53 9 megaton nuclear bomb was dismantled in October 2011, the “canned sub-assemblies” (presumably the “physics package”) of some of them were retained in a stockpile “pending a senior-level government evaluation of their use in planetary defense against earthbound asteroids.” There has been no mention of the status of these components since 2015.

I am wondering whether the usual velocities achieved by our interplanetary probes are sufficient to reach such objects in time. Or, must we first perform some new rocket science?

I am wondering whether the usual velocities achieved by our interplanetary probes are sufficient to reach such objects in time.

It all depends upon the orbit of the incoming object. The most likely Earth impactors are near-Earth objects (NEOs). Those which pose a potential threat are in orbits which, necessarily, cross that of the the Earth, and many of these have relatively low eccentricity and inclination, which makes them easy to get to in terms of delta-v. In fact, many near-Earth asteroids cost less delta-v to get to than the Moon. The fact that the object is bound for Earth impact means you only have to escape Earth’s gravity and head right for it, and its own inbound velocity will add to that of the spacecraft leading up to the intercept. If you don’t need to rendezvous with it, but can simply detonate the bomb at the moment of closest approach on a fast fly-by, that further reduces the propulsion requirement.

The W88 nuclear warhead has a mass of no more than 360 kg and a yield of 475 kilotons of TNT. By comparison, Elon Musk’s Tesla Roadster, which the first Falcon Heavy launched into an orbit very similar to that which would be required to intercept a near-Earth asteroid, had a mass of 1300 kg.

Far less common but potentially more dangerous and difficult to deflect in time are comets which fall in from the outer solar system and approach the Earth with high velocity. These provide much less warning time (prior to spacecraft observatories, one coming from the direction of the Sun wouldn’t be detected until moments before impact) and have velocities which are difficult to match. Depending upon the warning time and orbit, we may not have the capability to intercept one with current technology.

I was under the impression that both impactor and tractor approaches were infeasible. Furthermore, putting a nuke on a rocket is indistinguishable from a weapon. Seems like the politics would be a huge problem.

I was under the impression that both impactor and tractor approaches were infeasible.

The feasibility of any technique to redirect an asteroid depends upon the size of the body and how much time you have from the prediction and the expected impact. On the Wikipedia gravity tractor page, there is a worked example of diverting a 100 metre asteroid with a mass of one million tonnes with an Earth impact predicted more than ten years in the future. A solar powered spacecraft with a total mass of 20 tonnes, station keeping at 200 metres from the asteroid and expending 1000 kg of reaction mass through an ion engine, would be able to apply sufficient force to change the velocity of the asteroid by 1 cm/second which would, over ten years, be sufficient to divert it from hitting the Earth. The gravity tractor is impractical if you do not have sufficient warning time to accumulate sufficient delta-v with the very small force it exerts. The advantage of the gravity tractor is that it works regardless of the composition of the asteroid, its mechanical properties, or its rotation.

The nuclear disruption option is not an impactor scheme. The nuclear detonation occurs at a close-range (a few metres) stand-off from the object. This causes radiative energy transfer to the asteroid, which causes ablation, pulverisation, and ejection of mass from the side facing the detonation. This causes a substantial amount of the mass to be ejected onto trajectories that will not intersect the Earth or, if it does, will be small enough to burn up in the atmosphere. This will cause a reaction force that will divert the remaining mass to miss the Earth. It largely avoids the risk of an impactor, wherein a loosely-bound “rubble pile” asteroid may simply be broken up into several parts, all of which will still hit the Earth.

Having a big gun does give us more options when faced with a life ending threat which has happened numerous times in Earth’s history. https://meteorcrater.com/ 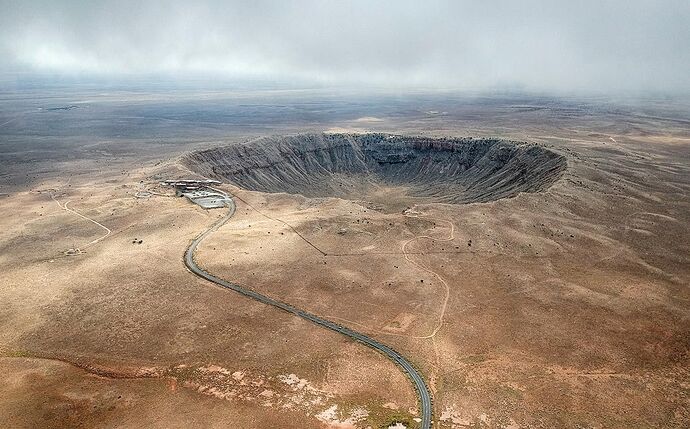 I understand the ablation idea (basically project Orion, and my favorite part of the book “Footfall” – God was knocking, and he wanted in). But a surface detonation was addressed in the video in the 14 to 16 minute marks and the determination there was that the gravity of the body would be sufficient to pull the debris back together.

I have a contact at LLNL, so I’ll ask him if he knows about the simulation.

Okay, so I got the paper from inter-library loan and read it. Interesting – they used a scaled down model of Bennu (to 100m as you said, which would wipe out a city) and simulated the megaton explosion at 15m above surface. This is really exciting stuff. The Veritasium video said there’s nothing we can do right now about 1km asteroids (country destroyers) but we think we’ve found all of them. The sub-1km asteroids (100km destruction radius) fall in this category.

Fascinating stuff. And really does look like new information. What I’d like to see is more investigation in that 100-1000m range. Impressive start.