OpenSCAD Comes to the Browser

OpenSCAD is a parametic modelling package which allows creation of three-dimensional models of objects to be built from primitives (boxes, spheres, cylinders, etc.) with constructive solid geometry. The package is free and open source software licensed under the GPL and runs on Linux, BSD, and legacy proprietary platforms such as Windows and MacOS.

Models in OpenSCAD are defined entirely in its text-based scripting language—there is no icky GUI to stick to you (you can visualise the models you create via OpenGL), and the software demonstrates that when you’re building parametric models, what you want is a programming language, not a bunch of gymnastics with a mouse and graphics screen. OpenSCAD models can be exported as STL files, compatible with most 3D printers.

Now, two projects are bringing OpenSCAD to the the browser, able to run in any modern Web browser without installing software on your own computer or connecting to a “cloud” service (somebody else’s computer). 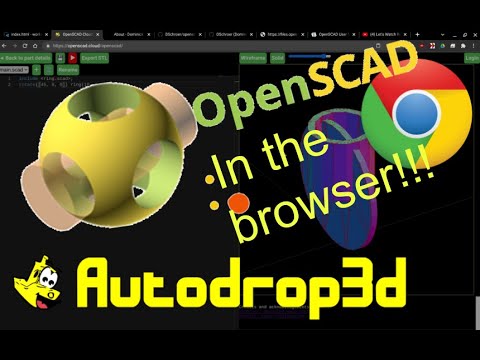 Here is a Hackaday article, “The Noble Effort to Put OpenSCAD in the Browser” describing the two projects.