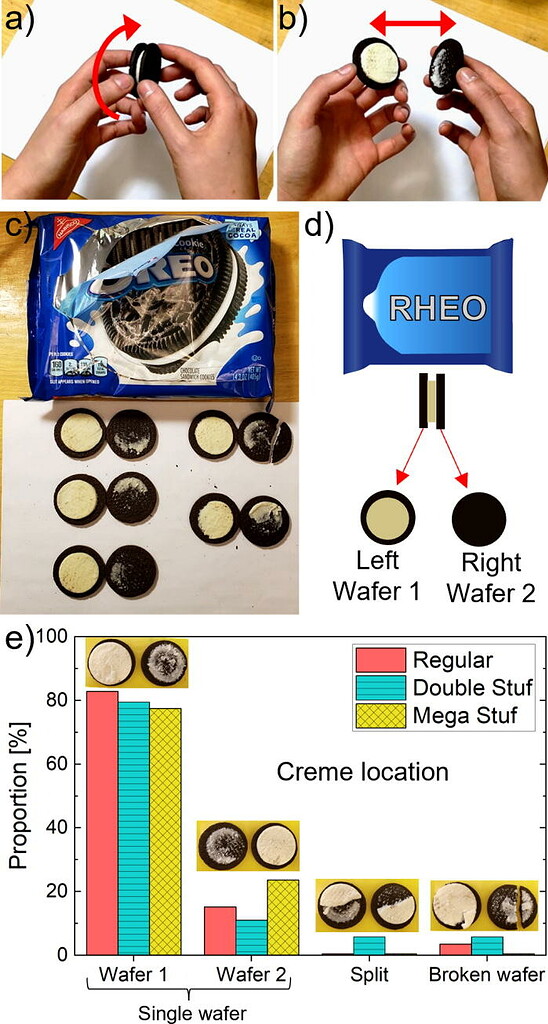 Physicists today are faced with major challenges. Around 95% of the mass of the universe appears to be made of something about which they know nothing and simply call “dark matter” and “dark energy”. Their two most fundamental theories: general relativity and quantum mechanics, are mathematically incompatible and nobody has made much progress in resolving the conflict in the last century. And then there’s the matter of which wafer the filling sticks to when you twist apart an Oreo cookie.

In a paper just published in the American Institute of Physics journal Physics of Fluids, “On Oreology, the fracture and flow of ‘milk’s favorite cookie®’ ”, three MIT researchers report experimental and theoretical investigations of this perennial conundrum.

The mechanical experience of consumption (i.e., feel, softness, and texture) of many foods is intrinsic to their enjoyable consumption, one example being the habit of twisting a sandwich cookie to reveal the cream. Scientifically, sandwich cookies present a paradigmatic model of parallel plate rheometry in which a fluid sample, the cream, is held between two parallel plates, the wafers. When the wafers are counter-rotated, the cream deforms, flows, and ultimately fractures, leading to separation of the cookie into two pieces. We introduce Oreology (/ɔriːˈɒlədʒi/), from the Nabisco Oreo for “cookie” and the Greek rheo logia for “flow study,” as the study of the flow and fracture of sandwich cookies. Using a laboratory rheometer, we measure failure mechanics of the eponymous Oreo’s “creme” and probe the influence of rotation rate, amount of creme, and flavor on the stress–strain curve and postmortem creme distribution. The results typically show adhesive failure, in which nearly all (95%) creme remains on one wafer after failure, and we ascribe this to the production process, as we confirm that the creme-heavy side is uniformly oriented within most of the boxes of Oreos. However, cookies in boxes stored under potentially adverse conditions (higher temperature and humidity) show cohesive failure resulting in the creme dividing between wafer halves after failure. Failure mechanics further classify the creme texture as “mushy.” Finally, we introduce and validate the design of an open-source, three-dimensionally printed Oreometer powered by rubber bands and coins for encouraging higher precision home studies to contribute new discoveries to this incipient field of study. 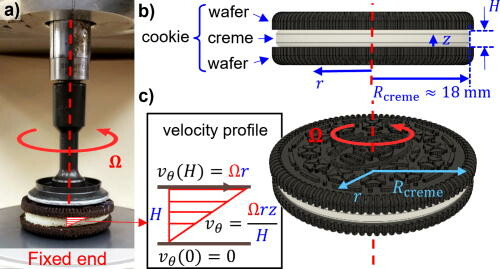 A 3D printed Oreometer is used to perturb cookies with scientific precision by applying a known and controlled torque. (a) In this device, (1) the cookie is mounted first into one half and then (2) the second half of the rubber band-powered clamps, which are then (3) placed into the vertical assembly mount. (4) “Penny castles” are mounted on the wings, and coins are successively loaded to one side to apply controlled torque until (5) the creme yields. (b) Results replicate values measured by the laboratory rheometer. (c) Photographs demonstrate the same tool, also including the rubber bands in two different arrangements designed to apply different levels of gripping strength in the clamps. 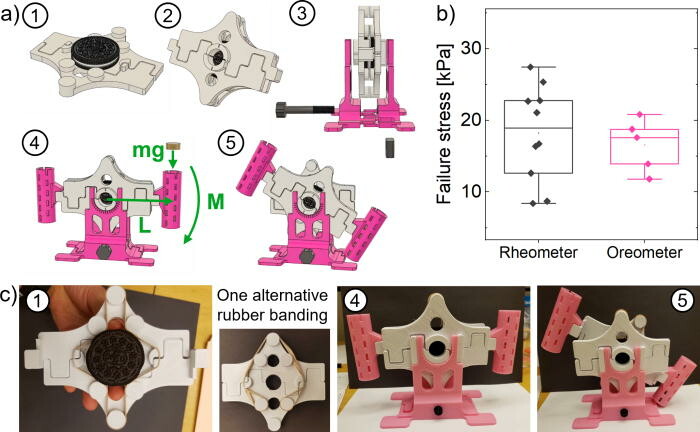 But more work remains for those working in this challenging field.

Moreover, questions remain to be explored if we are to fully understand cookie flow phenomena, and for this purpose, we have introduced a home-use Oreometer. A topic of particular interest may be what influences the change from adhesive to cohesive failure. If this is due to altering of the creme structure, then one may wish to explore whether it can be affected by compressing cookies before twisting, humidity, temperature, addition of a flow agent, or fracturing wafers before twisting. Other tests could be done with temperature control by using the Oreometer on cookies quickly withdrawn from the fridge, microwaved slightly, or dipped immediately beforehand in milk, where the device can be placed close to the kitchen appliances to minimize transfer time. The mode of failure of cookies may also be investigated manually by peel tests applied at the same time as torsion to study mixed-mode failure. If cookie manufacturers would like to influence creme distribution themselves, providing wafers with through-holes or texture on inner surfaces should promote creme–wafer adhesion onto both halves. Future studies may examine other sandwich-variety cookies, such as other brands of sandwich cookie, custard creams, macarons, and ice cream sandwiches—wherein temperature would be expected to have greater influence—as well as Nutter Butters, peanut butter between crackers, and other savory snacks. Planar shear tests, rather than torsional shear, may probe whether the fruit paste inside Newtons (previously known as Fig Newtons) indeed have the implied Newtonian flow behavior, or whether they are not only sometimes non-fig-containing, but are also rheologically non-Newtonian [and hence may become known as non-Newton(ian)s]. Our results and methods of investigation may also have widespread application in understanding other torsional events in the kitchen, from braided breads and mixing dough to ideal opening kinematics of stubborn jam jar lids. Finally, the development of an Oreology subdivision within the Society of Rheology might be expected as this field of study evolves and expands.

Was this published on April 1st?

They talk about future studies using compression, but fail to mention pulling while twisting to develop an understanding of the complex relationship between sheer and peel dynamics. The cream probably does not meet Dahlquist criteria of an adhesive.