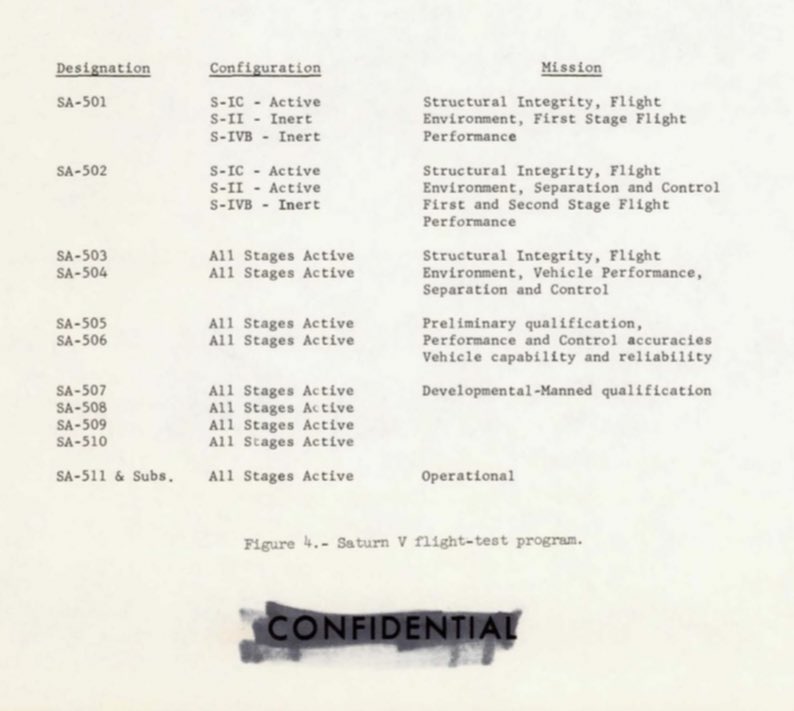 This is the original test program proposed for the Apollo Saturn V Moon rocket. This assumed an incremental von Braun-style test campaign as was used for the Saturn I, with three separate launches to qualify the stages in succession, then a series of tests leading up, if all were successful, to the first manned flight on Saturn V launch number 7 (SA-507).

George Mueller, Director of NASA’s Office of Manned Space Flight, realised this protracted development schedule would slip any possible lunar flight well into the 1970s, and advocated “all-up” testing, where the very first launch would involve all operational stages and aim for a full qualification mission. This was vigourously opposed by von Braun, who later recounted his view.

In 1964 George Mueller visited Marshall and casually introduced us to his philosophy of ‘all-up’ testing. To the conservative breed of old rocketeers who had learned the hard way that it never seemed to pay to introduce more than one major change between flight tests, George’s ideas had an unrealistic ring. Instead of beginning with a ballasted first-stage flight as in the Saturn I program, adding a live second stage only after the first stage had proven its flight worthiness, his ‘all-up’ concept was startling. It meant nothing less than that the very first flight would be conducted with all three live stages of the giant Saturn V. Moreover, in order to maximize the payoff of that first flight, George said it should carry a live Apollo command and service module as payload. The entire flight should be carried through a sophisticated trajectory that would permit the command module to reenter the atmosphere under conditions simulating a return from the Moon.

Mueller out-ranked von Braun, and his plan was adopted. The first Saturn V carrried a complete Apollo spacecraft payload (less lunar module, which was not ready at the time) and successfully flew a mission simulating re-entry from the Moon. The third Saturn V launched Apollo 8 into lunar orbit, and the sixth, AS-506 (the acronym had been switched by that time), launched Apollo 11 for the first manned lunar landing.

In 1969, von Braun wrote, “In retrospect it is clear that without all-up testing the first manned lunar landing could not have taken place as early as 1969. It sounded reckless, but George Mueller’s reasoning was impeccable.”

Here is more about George Mueller and all-up testing.