Henley & Partners, an international consulting firm specialising in residence and citizenship by investment, in conjunction with the International Air Transport Association, compiles and publishes annual editions of the Henley Passport Index which, for 199 different passports and 227 travel destinations, ranks nationalities by the number of destinations to which holders of their passports may travel without a visa. (There are more passports than countries in the world because regions of certain countries have different passports. For example, Hong Kong and Macau, officially parts of China, have their own passports which afford their holders much more visa-free travel [170 and and 144 destinations, respectively] than that of China proper [74 destinations]).

The Henley Passport Index for 2022 was published on 2022-01-11 and is available as a Web page or infographic [PDF]. Here are the nationalities in the top ten ranks from the infographic. 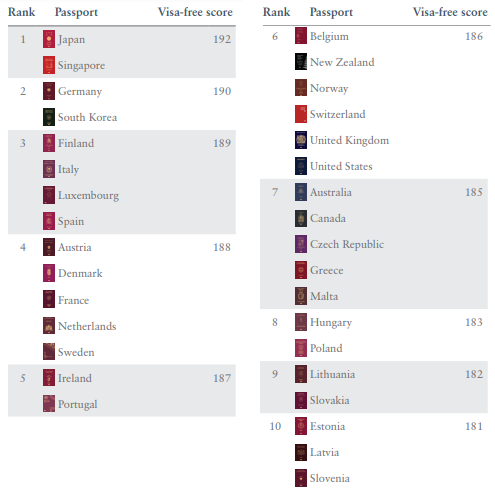 Think of these as “A List” passports. Here is “F Troop”.

I am a bit surprised that NorKo is higher than Iraq, Syria, or Pakistan.

It’s difficult to puzzle out the reasons for these things. It may be that with visitors from North Korea you know what you’re getting whereas from the underside of the Islamic world all bets are off.

One of the reasons the U.S. ranks fairly low among the A List countries is that it requires visas from many countries that the higher-ranked passport issuers admit visa-free. This results in tit-for-tat reciprocity where those countries slap visa requirements and entry fees on visitors from the U.S. The last time I was in Chile, there was a line at immigration control for U.S. passport holders to pay their “reciprocity fee” to enter the country which was set to the fee the U.S. charges Chileans for a tourist/business visa (as I recall, US$ 140).

It is an interesting list, but ranking passports simply on the number of visa-free entries may give only one perspective on a multi-faceted issue.

Visa-free entry is attractive, but it is not the only factor in cross-border travel. I am reminded of some Danish colleagues (ranked #4 - 188 visa-free countries) who before travelling internationally would change their krone into more recognizable US dollars. Or the Uruguayan colleague who could enter Russia visa-free – but still found his Uruguayan passport getting a very thorough investigation by doubting Russian immigration staff.

Visa-free entry is attractive, but it is not the only factor in cross-border travel.

There are, of course, many possible criteria for ranking the desirability of different nationalities. For example, for decades, the communist Sendero Luminoso guerrillas in Peru have run a racket where they stop buses in rural areas and take hostage anybody with a U.S. passport, then demanding a ransom to free them. This isn’t so much due to commie antipathy to the capitalist imperialist aggressors as shrewd business sense that U.S. citizens travelling in rural South America usually have somebody willing to pay to rescue them, while holders of obscure third world passports are nowhere near lucrative as hostages.

U.S. nationality is pure poison for anybody working outside the U.S. after the enactment of the disastrous FATCA legislation in 2010, which basically made it uneconomical for foreign banks to do retail business with U.S. citizens. U.S. national employees working abroad find it nearly impossible to open bank accounts, which, in turn, is a real problem since most employers in Europe pay salaries by direct deposit to the employee’s account. The ongoing and accelerating surge in renunciations of U.S. nationality took off immediately after FATCA took effect. 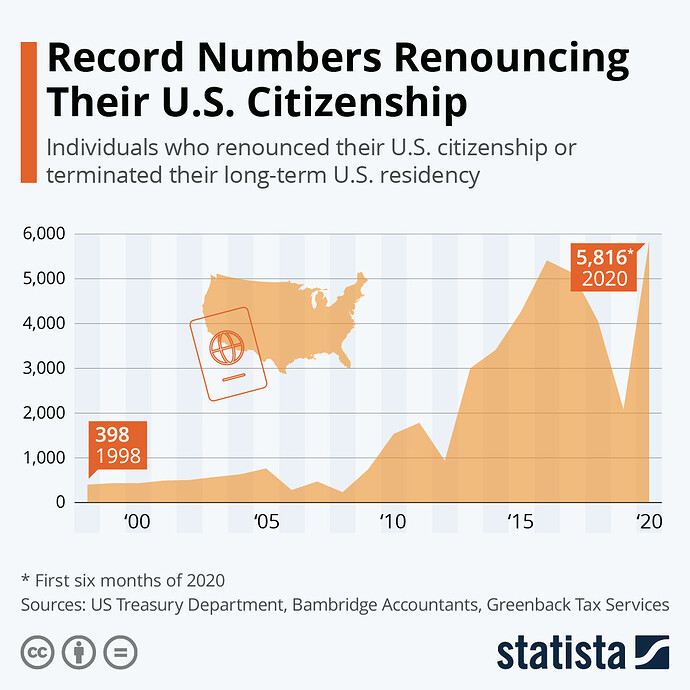 “Due to COVID” there is now a backlog of some 30,000 U.S. citizens waiting for the State Department to grant them renunciation interviews at U.S. embassies and consulates abroad.

The working abroad and renunciation policies are like the peep hole into the reality of the US.

The mentality is obvious. Everything and everyone is the property of the government.

I wonder what percent of the citizens would agree with the policy? My initial thought is that it would be a tiny percentage. Then I think about the reality. A large percentage of the population hides behind fake virtue and they have made calling out that fake virtue a sin.

The fake virtue argument for this US policy is that these people are tax cheats.

A few years back in a debate about taxes with family and friends, I put my wallet on the table. “Why don’t you just take my wallet?” “If we vote on it, does that make it ok?” “What if you just plan on giving it to someone that you think needs it?”

I think that registered with a couple. I think a couple just knew they couldn’t make some fake virtue argument.

A good portion of the democrats are now perfectly comfortable saying it is ok to steal. If you are “poor” or a minority, it is ok to steal. They currently backtrack or deceive the people when the stealing makes the news. I wonder how long before they won’t have to be deceptive to get re-elected.