On Wednesday, Dave Tremper, director of electronic warfare for the Office of the Secretary of Defense, told the C4ISRNET Conference that Starlink countered the attack faster than the US military would have been able to.

Musk said on March 25 that Starlink had, at that point, “resisted all hacking and jamming attempts.” Tremper’s comments are thought to provide the first details of a Russian jamming attempt on Starlink’s systems.

Tremper said that the day after reports of a Russian jamming attack emerged, “Starlink had slung a line of code and fixed it,” and suddenly the attack “was not effective anymore.” He said the countermeasure employed by Starlink was “fantastic,” adding: “How they did that was eye-watering to me.”

Tremper said the US had a “significant timeline to make those types of corrections,” adding: “There’s a really interesting case study to look at the agility that Starlink had in their ability to address that problem.”

I call propaganda. How many people in Russia have the receiver?

The US probably tried to jam it.

Tremper said that the day after reports of a Russian jamming attack emerged, “Starlink had slung a line of code and fixed it,” and suddenly the attack “was not effective anymore.” He said the countermeasure employed by Starlink was “fantastic,” adding: “How they did that was eye-watering to me.”

Does Starlink (or SpaceX) have an equity action plan? Inquiring minds wish to know…

Separately, I wonder if Dave Tremper’s information opsec practices are really up to speed 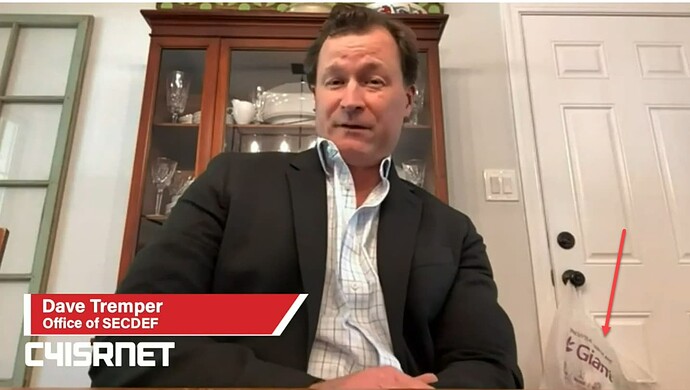 Since I’m on the StarLink waiting list, I got that RV notice in an email. Key points in the email:

Does make me want to get an RV.

Here is a Speedtest run on Starlink from a sailboat on the water.

Thank you for sharing … the scenario in the boat though is a prototypical lightly (if at all) loaded sector where you experience peak throughputs while pumping full buffer data. Not very indicative of average performance with loading in place. 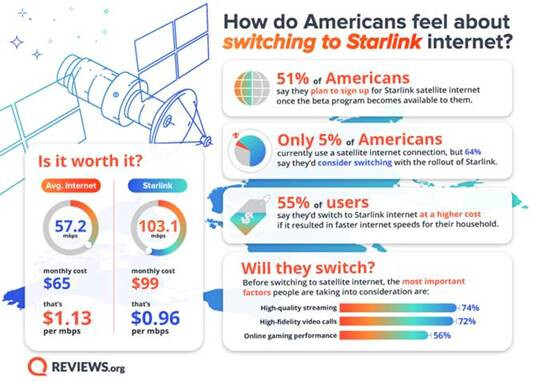 Starlink did a lot of things right in terms of the network architecture decisions as well as leveraging the benefits of an end-to-end integrated architecture. In a filing with the FCC on May 19, 2022, the company disclosed going over 400,000 subscribers globally. The remarkable thing about that is that back in March this year, they had just cross 250,000 subscribers, so there is significant momentum. 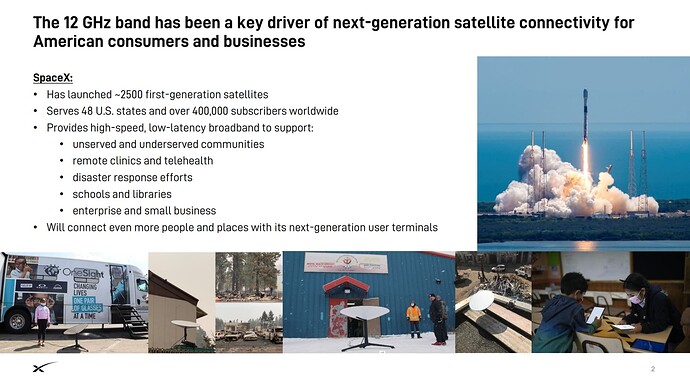 With current pricing (source), Starlink gets “free” launches with the Space/X Falcon 9 to the tune of $67M/60 satellites launched. In addition, the FCC awarded Starlink $900M subsidy over 10 years in December 2020 as part of the Rural Development Opportunity Fund (RDOF) phase 1.

Given that Falcon 9 is effectively the cheapest source of LEO launches, one could argue that Starlink has a very effective “moat” against competitors. With over 2000 satellites launched to date, and as long as they remain careful so as not to be charged with monopolistic practices, Starlink will eventually dominate the market.

In addition, the FCC awarded Starlink $900M subsidy over 10 years

I would like to know the number of people that do not have access to the internet? It has to be very small. I have a place in rural SD and they hooked up fiber under obama’s give away. We didn’t apply or ask. I am not even sure they asked us. The speed is better than my suburban connection.

Our Senator was bragging that she got funding for the state for rural internet connection. I would bet far less than 1/2 of one percent don’t have internet available.

My guess is the 900 million represents over 5000 bucks per person. I wouldn’t be surprised if it is 5 times that.

I would like to know the number of people that do not have access to the internet?

It depends by what “access to the Internet” means. If you mean residential broadband and go with the current low-end of 10Mbps down 1Mbps up, then a ballpark range is 3-6M people in the US. The RDOF subsidy received by Starlink targets 100/20 speeds and, incidentally, so does the Infrastructure Investment and Jobs Act $42.5B subsidy enacted by Congress last year and administered by the NTIA.

The problem with rural broadband is that fiber economics at low household densities are terrible. Fixed Wireless Access (FWA) solutions are slightly cheaper per covered household, but still require some sort sort of backhaul connection to the radio (ideally fiber, but other options work, including satellite).

The other side of the Internet access story is the so-called “digital divide”, which cuts across urban/suburban/rural boundaries and reflects disadvantaged socio-economics rather than access limitations. Last figure I recall here is approx 20M households in the US are underserved (meaning less than 10/1Mbps)

If by “access to the Internet” you mean cellular coverage, the FCC has been building so-called broadband maps using cellular service provider submissions collected twice a year (form 4777). Take a look at the map here. Accuracy is approx 100m. There is a much longer different discussion about how valid the maps are, but the problem they are meant to address is really tough to solve.

4 Likes
CTLaw 19 September 2022 13:25 #11
@
Interesting statement from Russia on satellite use: “Quasi-civilian infrastructure may become a legitimate target for retaliation. It’s clear that Starlink has become an important part of Ukraine’s command, control and communication system in parts of the country.” 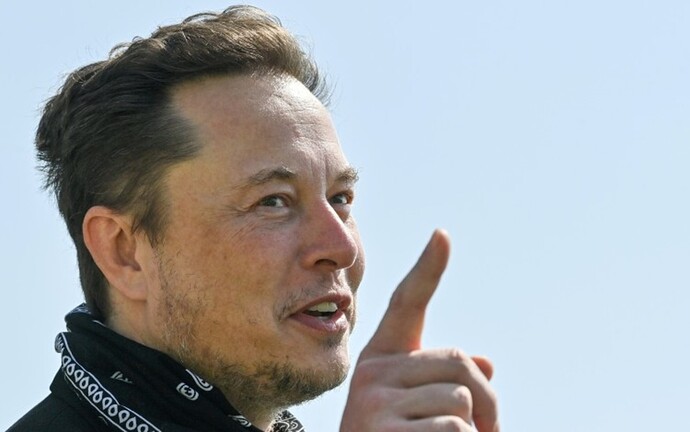 Elon Musk Hits Back on Russia

The billionaire CEO of Tesla and SpaceX gave his support to the Ukraine invaded on February 24 by Moscow.

Interesting statement from Russia on satellite use… 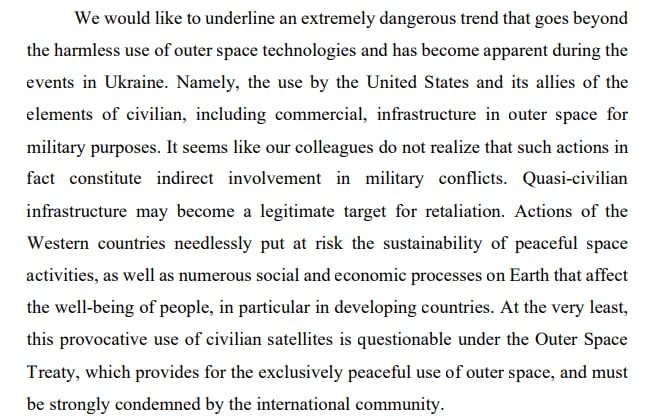 The second sentence is a statement by the tweet author, Shashank Joshi, defence editor at The Economist. The word “Starlink” does not appear in the statement by the Russian delegate—it is only implied. The veiled threat could equally apply to providers of commercial imaging intelligence such as Planet Labs.

I would like to know the number of people that do not have access to the internet? It has to be very small.

In the U.S.A. in 2022, there are a surprisingly large number of regions that use Bell system copper wire system from the 50s for internet (good for email, and some web pages, but Zero videos).

Agree with “surprisingly large” in the context of an enormous landmass with fairly concentrated population along side large urban centers and very sparsely populated large areas in the in the rest.

The particular area you highlight is very sparsely populated (source) 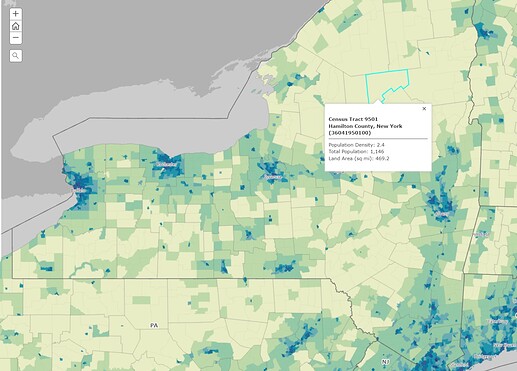 Of course, if you are on of the 2.4 people/sq. mi in that neck of the woods, no cellular phone signal is no fun.

Time for Iran to try: 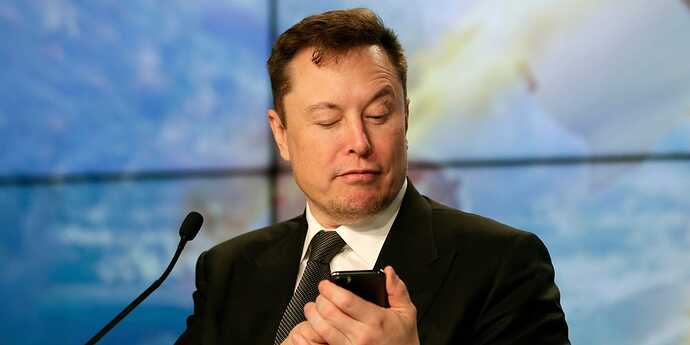 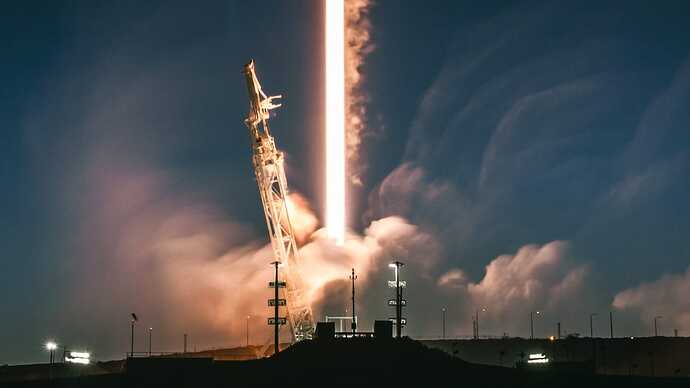 The University of Texas Hacked Starlink’s Signal So It Can Be Used as a GPS...

SpaceX didn't want to cooperate, so the researchers had to figure things out the hard way.