The casual consumer of official news might conclude that it is “game over” – because of the conflict in the Ukraine, Africa is going to starve, Europe is going to be overwhelmed with African refugees, and civilization is going to come to an end.

Presumably, the evil capitalists who buy & sell wheat are making out like bandits on the back of this incipient human misery. Let’s look at the charts:
Wheat Prices - 40 Year Historical Chart | MacroTrends

Here is Chicago Board of Trade wheat prices (US $/Bushel) over the last year: 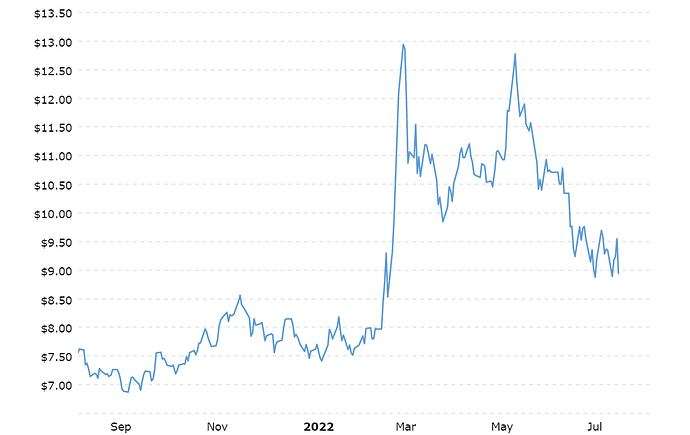 Hmmm! Looks like price spiked when Russia intervened in the Ukrainian civil war and is now declining back towards trend. But looking at only the most recent year may be misleading.

Here is the picture over the last 10 years: 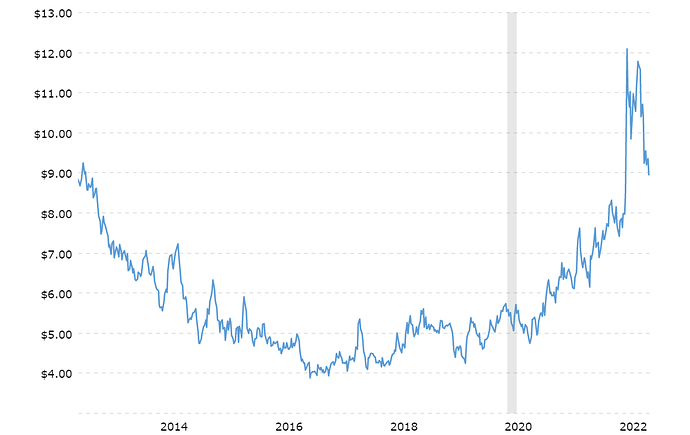 Nominal price of wheat is back to about where it was in 2012, when the US Dollar was worth more than it is today. Current price of wheat of about $9/bushel is pretty much on trend with the increase since mid-2020.

I guess we should be cautious about accepting what the official media try to tell us.

The casual consumer of official news might conclude that it is “game over” – because of the conflict in the Ukraine, Africa is going to starve, Europe is going to be overwhelmed with African refugees, and civilization is going to come to an end.

Up in North Cuba, the Toronto Sun reports, “Trudeau pushes ahead on fertilizer reduction as provinces and farmers cry foul”:

Provincial agriculture ministers are expressing frustration with the Trudeau government over plans to effectively reduce fertilizer use by Canada’s farmers in the name of fighting climate change.

A meeting of federal and provincial ministers wrapped up in Saskatoon on Friday with several provinces saying they are disappointed.

“We’re really concerned with this arbitrary goal,” Saskatchewan Minister of Agriculture David Marit said. “The Trudeau government has apparently moved on from their attack on the oil and gas industry and set their sights on Saskatchewan farmers.”

“This has been the most expensive crop anyone has put in, following a very difficult year on the prairies,” Alberta Minister of Agriculture Nate Horner said. “The world is looking for Canada to increase production and be a solution to global food shortages. The Federal government needs to display that they understand this. They owe it to our producers.”

As previously reported by The Counter Signal, in December 2020, the Trudeau government unveiled their new climate plan, with a focus on reducing nitrous oxide emissions from fertilizer by 30% below 2020 levels by 2030. That plan is now coming into effect — though the government refuses to acknowledge that nitrous oxide emissions can be reduced without reducing fertilizer use.

“Fertilizers play a major role in the agriculture sector’s success and have contributed to record harvests in the last decade. They have helped drive increases in Canadian crop yields, grain sales, and exports,” a news release from Agriculture and Agri-Food Canada reads.

“However, nitrous oxide emissions, particularly those associated with synthetic nitrogen fertilizer use have also grown significantly. That is why the Government of Canada has set the national fertilizer emissions reduction target, which is part of the commitment to reduce total GHG emissions in Canada by 40-45% by 2030….”

This is the same “nitrogen reduction” world famine policy which has proved so popular in the Netherlands. 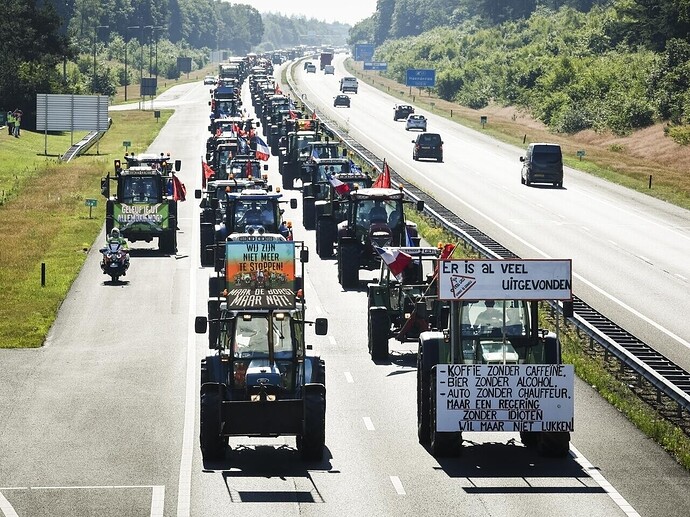 1280×960 348 KB
Nitrogen, fixed from the atmosphere by the Haber-Bosch process in industrial fertiliser production, accounts for around half of all the nitrogen atoms found in the tissue of humans alive today and has been a principal enabler of the growth of human population from 1.6 billion in 1900 to around 8 billion today. Reduce the fertiliser production, and population will decline accordingly.

It isn’t a conspiracy if they’re doing it right out in the open.

I think I disagree with you on this one Gavin. 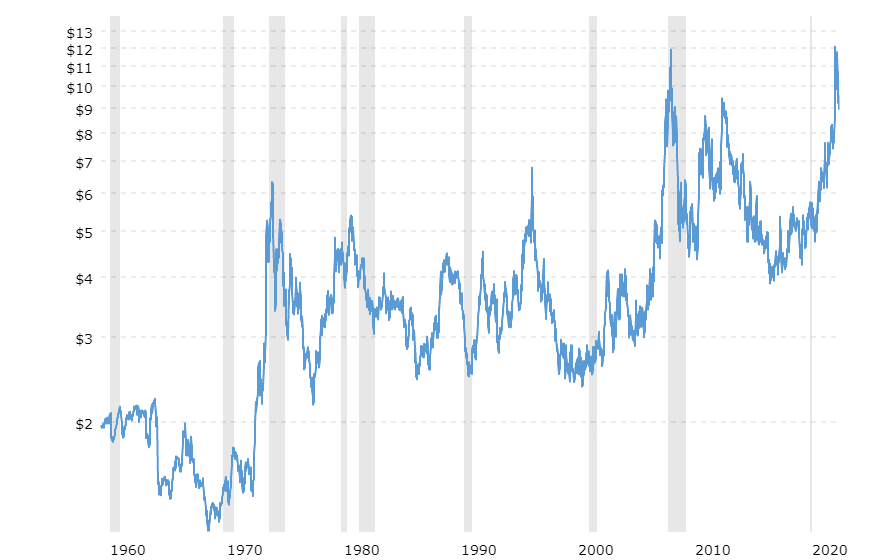 All of the staple crops look similar. Maybe you are saying it is not the war in Ukraine. I agree with that… Capitalism certainly isn’t the cause, but I am not sure where capitalism stands these days. Today’s situation appears closer to fascism to me and it is hard to separate government action and corporate action. Thus, they appear to be working together. Not only as a giant grift machine, but by accumulating power.

When I look at the long term charts, I see a spike up to a new level of pricing with a lot of variability around the new average. My speculation is this is the impact of a cycle due to inflation. Starting with the price run up, new capacity is brought on line. The new supply brings the price down from astronomical levels to a level that the producer can be profitable. Over time, inflation eats away at the profits and supply is shuttered. Eventually demand and supply get out of sorts and the price spikes to a new level.

Agriculture is different than mining in that the producer cannot really expand capacity. It takes inventors in agriculture outside the direct producer to increase capacity. The farmer can expand his capacity by acquiring land, increase fertilizer usage (a new best economical application rate) and purchase improved machinery. In the farming community of my youth, the price spike in the 70s caused farmers to leverage up on land purchases. The price drop you see around 1980 caused the over leveraged farmer to go under. Many did. Over time this caused consolidation and larger more efficient operations produced more from the same amount of ground.

This time around seems to be different as fertilizer is attacked as John points out and governments such as Germany have reduced the amount of ground they allow to be farmed. So the two best methods to increase capacity short term are being attacked.

Get ready to party like it is 1884 because they seem to be getting away with it.

They said it was real simple. It is carbon. Then they added methane and now nitrogen. Wait until these bozos find out the greenhouse impact of H2O.

Capitalism certainly isn’t the cause

We agree wholeheartedly on that. My sense of humor can be misinterpreted!

A big part of the long-term change in the price of wheat is inflation, of course. Not Big Government CPI, but true inflation as experienced by peons and the Real Economy.

The bigger point is that the overwrought propaganda about the impact of the corrupt undemocratic Ukraine on global food supplies grossly overstates the case. That propaganda is indeed a function of the development in Western countries of an incestuous relationship between Big Intrusive Government and Big Business, all in thrall to Big NGOs. “Fascism” is a better description than capitalism or democracy – unfortunately!