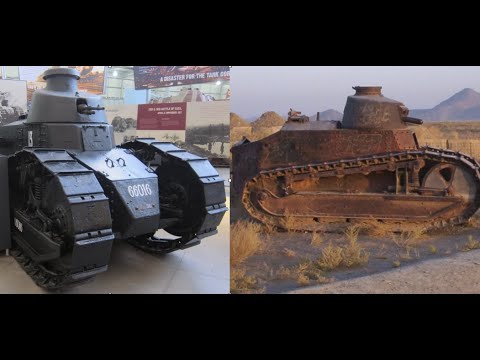 The Renault FT tank, (often referred to as the FT-17 in post-World War I publications) was a light tank designed and built by Renault for the French army in World War II. More than 3000 were produced, most in 1918. They were used by both French and American armies toward the end of World War I. Small, lightly armed and armoured, and with a crew of just two, the FT almost looks like a cartoon tank compared to the behemoths of World War II and afterward, but it was the first tank with a fully rotating turret and the modern configuration of driver, gunner, and engine at the rear.

After World War I, FTs were exported to more than fifteen countries and saw service in Europe, Africa, Asia, and South America. Some captured FTs were used by Nazi German forces in their last-ditch defence of Paris against advancing Allied forces. FTs were used by Afghan forces in the conflict with the Soviet Union in the 1980s, but solely as pillboxes and roadblocks. Four FTs were discovered by U.S. forces after they invaded Afghanistan in 2003 and returned to the U.S. for restoration.