Rivian developed the Electric Delivery Van (Rivian EDV) exclusively for Amazon, which is an investor that owns 18% of the company. Amazon Logistics ordered 100,000 of the vans to be delivered through the year 2030. The first vans went into service in nine cities in the U.S. in July 2022, and by November Amazon said it had more than 1000 in operation.

The van’s design was a collaborative effort between Rivian and Amazon, and it is highly optimised for Amazon’s operations. The branding is primarily Amazon, with “Rivian” appearing only twice in the vehicle. Range between charges is less than 240 km for the smaller 500 cubic foot (14 m³) capacity van and less than 190 km for the largest 840 cubic foot (24 m³) model. Amazon says that its use case does not require even this range, and presumably using a smaller and lighter battery pack reduces cost and weight and increases cargo capacity.

The van is built on a platform derived from the R1T pickup truck, but uses a single motor to drive only the front wheels.

At present, the only customer for the van is Amazon, although regulatory filings by Rivian suggest they may eventually market the vehicle to other customers, including different drivetrain options.

I would like see how this van does in an offset head on .

It also is building a plant in Georgia.

The 100k vans would easily be produced in a year on a single up-to-speed assembly line. And a plant will have several lines.

Given Tesla’s difficulties in launching new products, I assume Rivian will concentrate on expanding production of existing products. Thus, they will likely soon provide vans to customers beyond Amazon. 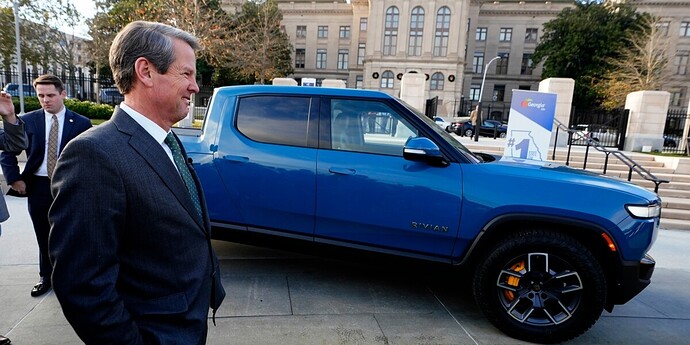 The electric vehicle maker was projecting to hire 7,500 people east of Atlanta. It said it "respectfully disagree[s]" with the decision.

Cox Enterprises, owner of The Atlanta Journal-Constitution, also owns about a 4% stake in Rivian and supplies services to the company.