Robert A. Heinlein on Diversity in Science Fiction 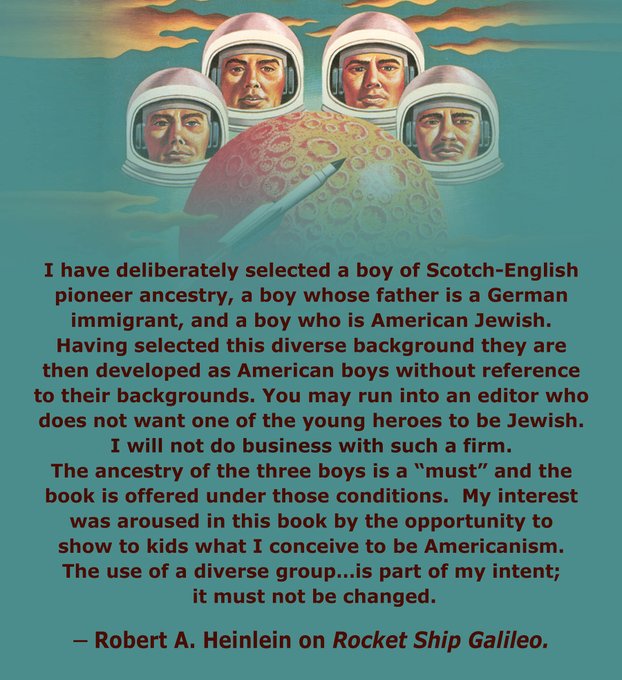 Rocket Ship Galileo, published in 1947, was the first of the “Heinlein juveniles”, aimed at what publishers now call the “young adult” market. The above was from a contemporary letter regarding his views on his choice of the teenage protagonists in the novel.

This is a rip-roaring adventure which remains readable today: here is my review from my most recent re-reading in 2015. The enduring popularity of these novels owes a great deal to Heinlein’s never talking down to his audience: the books are “juvenile” only in avoiding racy topics, but thoroughly enjoyable by adults. As I wrote in my review,

The remarkable thing about this novel is how well it holds up, almost seventy years after publication. While Heinlein was writing for a young audience, he never condescended to them. The science and engineering were as accurate as was known at the time, and Heinlein manages to instill in his audience a basic knowledge of rocket propulsion, orbital mechanics, and automated guidance systems as the yarn progresses. Other than three characters being young people, there is nothing about this story which makes it “juvenile” fiction: there is a hard edge of adult morality and the value of courage which forms the young characters as they live the adventure.

Not to mention diversity.

the books are “juvenile” only in avoiding racy topics, but thoroughly enjoyable by adults.

Nothing about the “juveniles” ever struck me as especially juvenile. I had to be told they were a separate category of Heinlein’s stories.

Heinlein is very high on my list. Reminds me it’s time to revisit a few of his memorable tomes. BTW, hi Doc.

Hey, man. Good to see you. I’ve only been here sporadically lately.

A 1898 technothriller, Edison’s Conquest of Mars, imagined a certain type of diversity that seems increasingly distant in the present:

Amid this stir of renewed life came the fatal news that Mars was undoubtedly preparing to deal us a death blow. The sudden revulsion of feeling flitted like the shadow of an eclipse over the earth.The scenes that followed were indescribable. Men lost their reason. The faint-hearted ended the suspense with self-destruction, the stout-hearted remained steadfast, but without hope and knowing not what to do. But there was a gleam of hope of which the general public as yet knew nothing.

It was due to a few dauntless men of science, conspicuous among whom were Lord Kelvin, the great English savant; Herr Roentgen, the discover of the famous X-ray, and especially Thomas A. Edison, the American genius of science. These men and a few others had examined with the utmost care the engines of war, the flying machines, the generators of mysterious destructive forces that the Martians had produced, with the object of discovering, if possible, the sources of their power.

Suddenly from Mr. Edison’s laboratory at Orange flashed the startling intelligence that he had not only discovered the manner in which the invaders had been able to produce the mighty energies which they employed with such terrible effect, but that, going further, he had found a way to overcome them.

The glad news was quickly circulated throughout the civilized world. Luckily the Atlantic cables had not been destroyed by the Martians, so that communication between the Eastern and Western continents was uninterrupted. It was a proud day for America. Even while the Martians had been upon the earth, carrying everything before them, demonstrating to the confusion of the most optimistic that there was no possibility of standing against them, a feeling-a confidence had manifested itself in France, to a minor extent in England, and particularly in Russia, that the Americans might discover means to meet and master the invaders.