Rocket Lab plans to launch NASA’s CAPSTONE (Cislunar Autonomous Positioning System Technology Operations and Navigation Experiment) on an Electron rocket from the company’s launch site on the Māhia Peninsula of New Zealand toward a Near-rectilinear Halo Orbit (NRHO) around the Moon. Launch is scheduled for 10:00 UTC on 2022-06-27 in an instantaneous launch window. The 300 kg payload will be carried by Rocket Lab’s Lunar Photon upper stage, which was designed to support missions to Venus and Mars as well as the Moon. The stage will raise its apogee in a series of burns until finally being captured by the Moon and entering the desired orbit.

This is a NASA summary of the CAPSTONE mission. 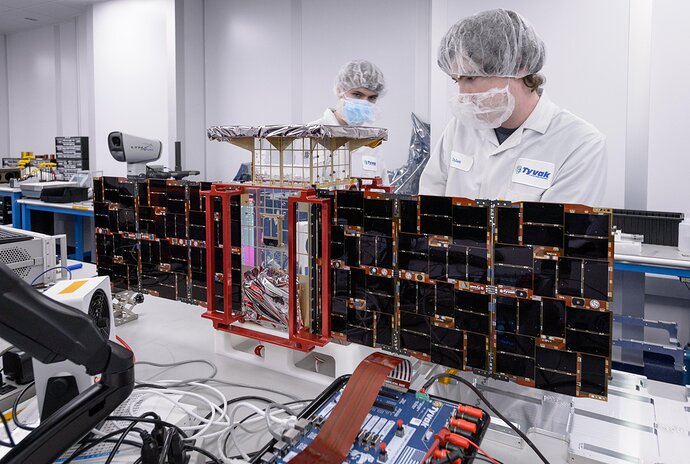 @
LAUNCH UPDATE: We're standing down from the June 27 launch attempt for #CAPSTONE to allow @RocketLab to perform final systems checks. Teams are evaluating weather and other factors to determine the date of the next launch attempt. Details: https://t.co/b4GuJW87Bx

A new launch time has been set for CAPSTONE, “CAPSTONE Launch Targeting June 28”:

NASA, Rocket Lab, and Advanced Space are targeting June 28 for the launch of the CAPSTONE mission. The instantaneous launch opportunity is at 5:55 a.m. EDT (09:55 UTC). Live coverage will begin at 5 a.m. EDT on NASA Television, the agency’s website, and the NASA app.

The launch was completely successful. I have cued the replay video to start one minute before liftoff—scroll back to see the preliminaries. To save weight and allow the CAPSTONE payload to carry the maximum amount of maneuvering fuel, there were no rocket cameras on the booster during this launch.

This begins a series of apogee raising burns at successive perigees, aiming for insertion of the payload into its lunar orbit on 2022-11-13.

The sheer frequency of launches is impressive. It is especially noteworthy that small, private companies can now send rockets to lunar orbit. I wonder if there is a chart showing simply the frequency of rocket launches to orbit or beyond and, if so, if it shows an exponential curve with an inflection point or is merely a straight line with a positive slope.

I wonder if there is a chart showing simply the frequency of rocket launches to orbit or beyond and, if so, if it shows an exponential curve with an inflection point or is merely a straight line with a positive slope.

Here is such a chart from Jonathan McDowell’s Space Statistics. 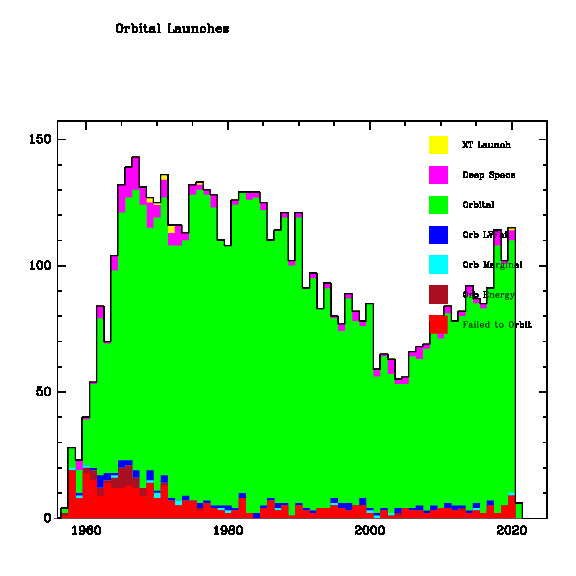 It’s not what you might expect. The big bulge from the late 1960s through the 1980s was largely U.S. and especially Soviet reconnaissance satellites which, due to the technology of the time, returned physical film to Earth and had short lifetimes, requiring numerous launches per year. Here is a breakdown by country showing the huge USSR contribution: 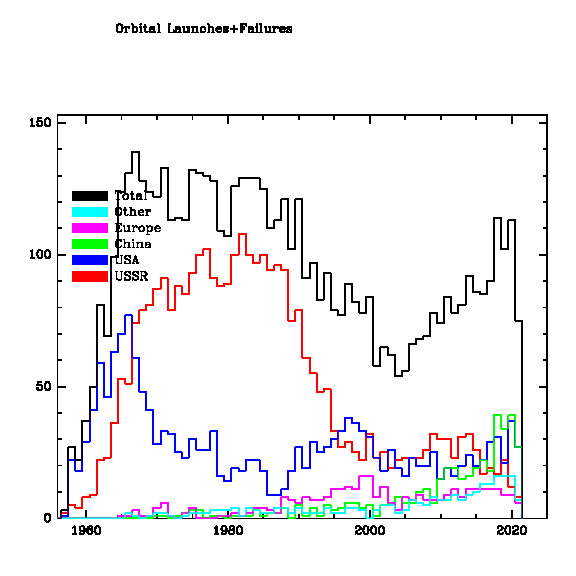 The U.S. was first to develop spy satellites that returned imagery electronically, which allowed long satellite life and dramatically reduced launch requirements. The Soviet Union was slow to catch up, and its launch rate remained high until the collapse of the USSR. The trough around 2000 was the era of infrequent launches of large communication satellites to geostationary orbit (the market for which Ariane 5 was optimised), and then began to pick up as large, low orbit constellations began to deploy. In terms of launches, however, we are still below the peaks.

However, it is now common to launch numerous payloads on one launcher—53 Starlinks on one Falcon 9, for example. Plotting number of payloads provides a completely different picture. 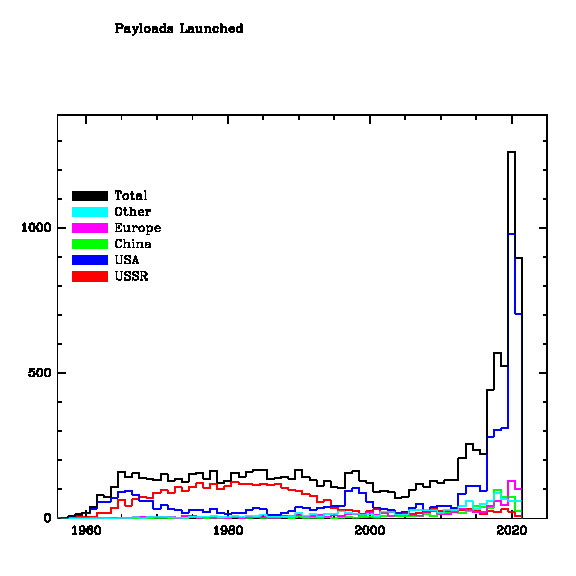 Although satellites have become far more numerous, progress in electronics has allowed their mass to be reduced. Here is payload tonnage, both total and by country. 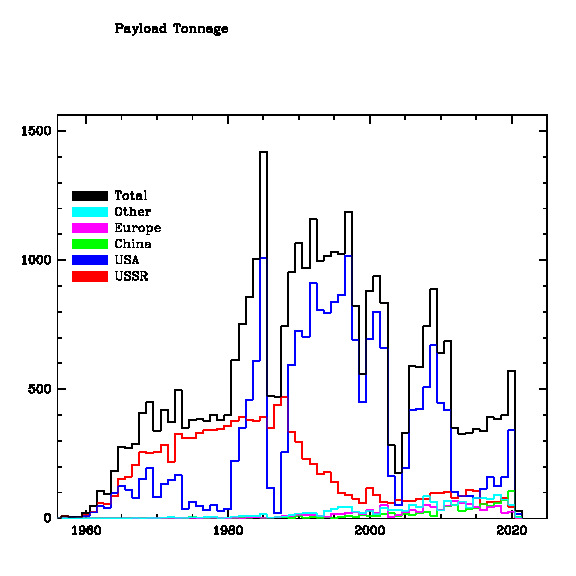 Finally, this is a chart of active satellites in orbit from Sputnik to the present. 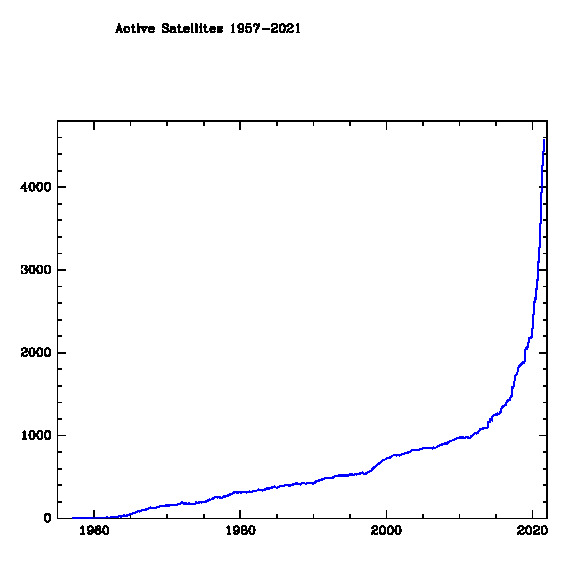 Wow! Not at all what I expected; shows my attention bias. Thanks for the explanation.

2 Likes
johnwalker 1 July 2022 11:20 #9
@
Update: Another successful burn! We actually combined burns 6&7 together as we determined that the HyperCurie engine was capable of pulling off a single maneuver and we are now at 69,680km apogee with just the final translunar injection burn left to do in a couple of days time.

(This tweet is from Peter Beck, founder and CEO of Rocket Lab. As part of Twitter’s slide into the age of incmpetence, it is now randomly failing to include the poster’s name in the oEmbed generated for tweets cited by link.)

This is a replay of the CAPSTONE trans-lunar injection burn from Rocket Lab mission control. The burn starts at 22:42 in the video, but the spacecraft is below the horizon so no real-time telemetry is available at that time. Acquisition of signal occurs at 32:25, at which time it is confirmed that the 98 second (416 m/s delta-v) burn was successful and the spacecraft has escaped Earth orbit. Payload deployment is at 44:25, with real-time telemetry coverage.

Due to weight constraints, there is no video from the spacecraft for these events.

NASA has apparently lost communications with CAPSTONE en route to the Moon.

Following successful deployment and start of spacecraft commissioning on July 4, the Cislunar Autonomous Positioning System Technology Operations and Navigation Experiment (CAPSTONE) spacecraft experienced communications issues while in contact with the Deep Space Network. The spacecraft team currently is working to understand the cause and re-establish contact. The team has good trajectory data for the spacecraft based on the first full and second partial ground station pass with the Deep Space Network.

The problem occurred after communication had been established with CAPSTONE after separation from the Rocket Lab Photon upper stage, so Rocket Lab is not on the hook for the problem.

Overnight, on 2022-07-05 at “8:00 pm” in some unspecified time zone, NASA issued “Further Details on Communications Issues with NASA’s CAPSTONE”.

Following CAPSTONE’s initial deployment on July 4, the spacecraft successfully deployed solar arrays, was stabilized, and began charging its onboard battery. CAPSTONE’s propulsion system was also readied for the spacecraft’s first maneuver. CAPSTONE made initial contact with the DSN ground station in Madrid, Spain, followed by a partial contact with the Goldstone ground station in California. From these contacts, mission operators have been able to determine CAPSTONE’s approximate position and velocity in space.

As a result of the communications issues, CAPSTONE’s first trajectory correction maneuver – originally scheduled for the morning of July 5 – has been delayed. This maneuver is the first in a series that are designed to make small corrections to increase the accuracy of the transfer orbit to the Moon, and the spacecraft remains on the overall intended ballistic lunar transfer while awaiting this trajectory correction.

During commissioning activities an anomaly was experienced related to the communication subsystem; the operations team is actively working this issue with the Deep Space Network and determining the best next steps. 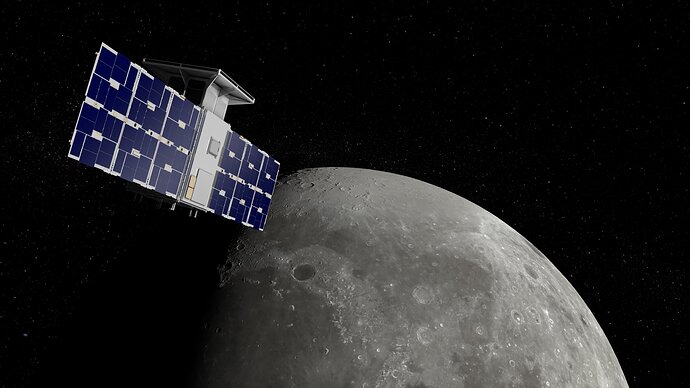 @
We have re-established communications with CAPSTONE. The spacecraft is looking happy and healthy. More details to come.
3 Likes
johnwalker 8 July 2022 12:13 #15
@
During #CAPSTONE's journey to the moon, it will complete a series of Trajectory Correction Maneuvers (TCMs) to ensure we continue our path to the moon. Successful TCM-1 for CAPSTONE performed better than expected. TCM-1 occurred this morning at 9:30AM MT. https://t.co/S3qxmzEoDt

Here is a mission update from Advanced Space, “CAPSTONE Trajectory Correction Maneuver a Success”. The report has this to say about the earlier communication outage:

As the team has continued to review data on the communications anomaly, the team remained confident with this conclusion prior to commanding the maneuver. Anomalies such as this are rarely a result of a single issue but instead are the result of a series of issues that converge in an unexpected way. For CAPSTONE, this series of events began during commissioning with an improperly formatted command that triggered a radio vulnerability and was compounded by a spacecraft flight software contingency response fault. The system was ultimately recovered by the team as a result of autonomous flight software system operations that cleared the fault and brought the system back into communication with the ground. During the communications outage the spacecraft autonomously operated, maintained pointing, battery charge, and performed a momentum desaturation maneuver.

If that is how the team writes English, no wonder their computer code has to struggle to understand what it is supposed to be doing.

“Desaturation” is a term of art in the control of spacecraft attitude (orientation in space) with reaction wheels or control moment gyroscopes. These devices allow rotating the spacecraft around three axes without expending propellant by electrically spinning up or down rotating wheels that transfer angular momentum from the spacecraft frame to the wheel. As long as orientation changes are equally balanced in each direction, this works, but eventually a wheel will reach its maximum rate of spin and cannot absorb any more angular momentum in that direction. This is called “saturation”. When this happens, a thruster must be fired in the opposite direction while spinning down the wheel in order to restore its ability to control attitude. This is called “momentum desaturation”, and is a regular part of spacecraft management. Some satellites in low orbits use coils that interact with Earth’s magnetic field (“magnetorquers”) to desaturate their reaction wheels, but this is unavailable for deep space missions such as CAPSTONE.

This is called “momentum desaturation”

Thank you, Mr. W. We come for the fun, and stay for the education.