Roe v. Wade has been overturned

The Supreme Court issued its decision less than half-an-hour ago. Will America be facing another round of left-wing riots and terrorism? 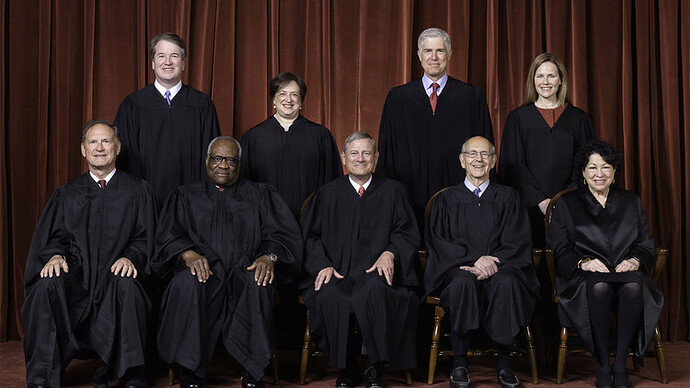 So far from what I have read of the official opinion, Alito is becoming my favorite justice.

You can read the whole Fox story without finding out how the judges voted. Here it is, from the decision PDF.

I guess that makes it six to three, despite Roberts having filed a separate opinion. I’ve already heard one politician spouting off about “five unelected judges.”

Yes, the AG of Delaware stated that this ruling came the day after SCOTUS “dramatically curtail[ed] states’ rights to regulate guns.” She also stated that SCOTUS has opened the door to more “draconian abortion policies this right-wing ruling has enabled.”

Good, more grease for the skids on this ridiculous empire’s way to separation. 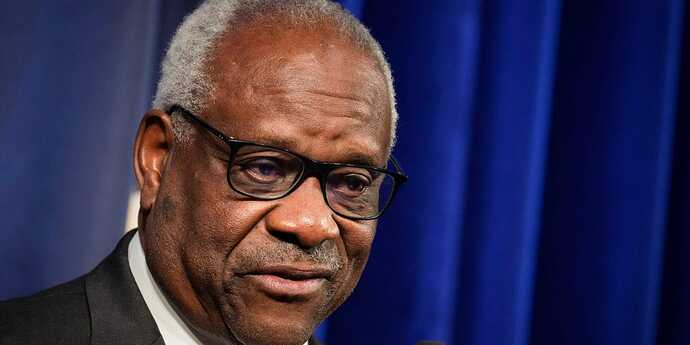 In a concurring opinion, Justice Thomas wrote that the Court should reconsider other cases that fall under the Court's previous due process precedents.

Yes, the whole concept of “substantive” due process is exemplary of an exception which ate the rule - waaayyy out of control. Mission creep writ large. Initially justified to protect unenumerated rights of the people from state coercion, this has instead led to their coercion via discovery of unenumerated powers of the state!

The list of cases Thomas offers, if one considers only the outcome of their overturning - rather than the soundness of the Constitutional construction - is a prescription for trouble; they are at the heart of the leftist agenda and would, like overturning Roe, lead to civil unrest. As a matter of judicial power and Constitutional interpretation, on the other hand, a very good case exists that they were wrongly decided and a serious usurpation of power by the judiciary (as was Roe).

Here is the majority’s smack-down of the “reasoning” in Roberts’ concurrence. 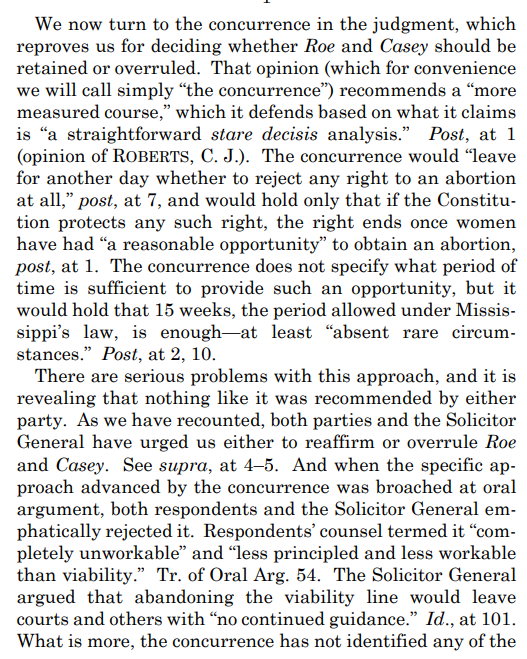 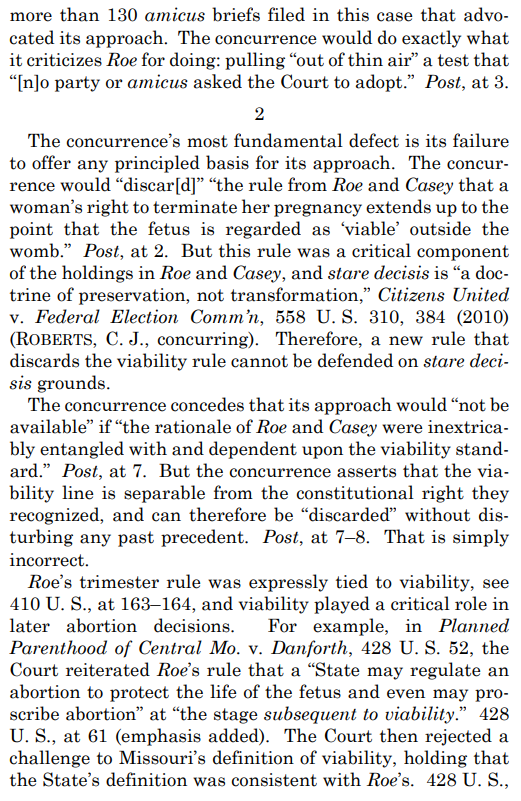 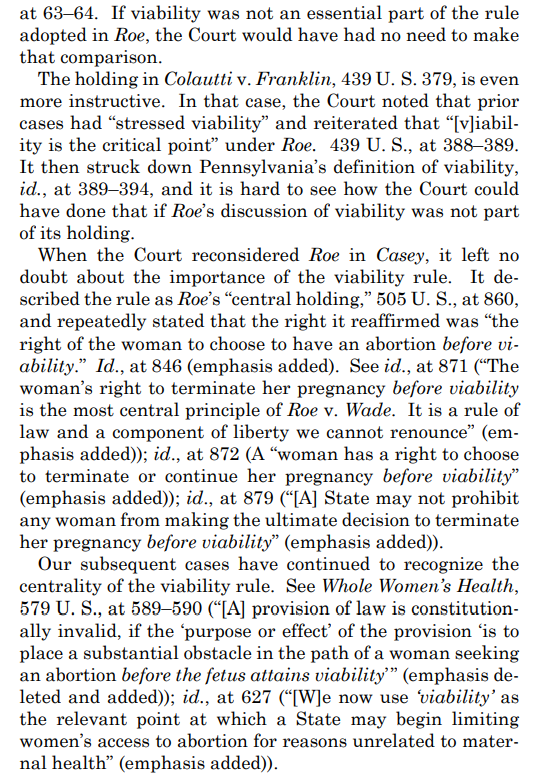 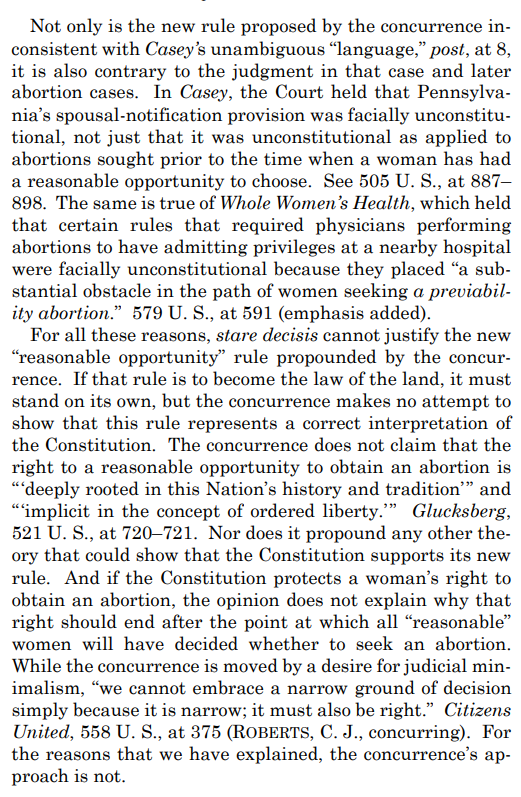 Here, courtesy of Clear|brief, are the complete annotated differences (including myriad tiny formatting changes) between the leaked opinion and Dobbs as published: “Tracked changes comparison of the leaked Dobbs opinion as compared to the final issued opinion” [PDF, 20 Mb, 1919 pages].

4 Likes
johnwalker 24 June 2022 18:51 #9
@
this is your reminder that today's SCOTUS decision goes against science and evidence and the basic tenets of good health for people who can get pregnant. stay tuned for more today from @sciam https://t.co/9bxBWinuLL

The author of this tweet, whose handle has been hidden for some reason by Twitter (it is @meghas, “megha satyanarayana”), a blue check who claims to be chief opinion editor of “Scientific” American, and includes pronouns of “she/her” in its biography, uses “science” in the same sentence as “people who can get pregnant”.

I would like the see the argument explaining the “evidence” and the “science” involved in the decision and just how that translates into a Constitutional right.
This is nothing but the latest jargon/shibboleth advertising adherence to the day’s received wisdom; used to just be “motherhood and apple pie”.

I feel kinda like I did about the OJ Simpson decision. The societal consequences are maybe practically the most important.
How many more people woulda died that night if OJ had been convicted?
And conversely, how much destruction of churches and businesses will there be tonight because of the Dobbs decision?

The majority opinion will also cause the gender-oppressed/obsessed/depressed crowd’s heads to explode: [even though we now know that since it has been declared to be sciency that men can also be “people who can get pregnant”, the following line of argument has now become superfluous!!]

“The regulation of a medical procedure that only one sex can undergo does not trigger heightened constitutional scrutiny unless the regulation is a “mere pretex[t] designed to effect an invidious discrimination against members of one sex or the other.” Geduldig v. Aiello, 417
U. S. 484, 496, n. 20 (1974). And as the Court has stated, the “goal of preventing abortion” does not constitute “invidiously discriminatory animus” against women”.

How many more people woulda died that night if OJ had been convicted?
And conversely, how much destruction of churches and businesses will there be tonight because of the Dobbs decision?

I see your point. On the other hand, how many people were murdered by someone who thought they could get away with it just like OJ? And how many unborn babies will be saved as a result of this ruling?

It’s impossible and inappropriate to put a price on justice. We ought to do what is right, regardless of the social consequences. If crimes are committed against the pro-life crowd and churches are burned, this will serve only to lay bare the wickedness of the enemy. “Let Justice Be Done Though The Heavens Fall.”

I don’t know. All trials are show trials. All we can do is await the consequences.

That’s just a tad too much cynicism for me. A lot of trials are dog and pony shows, but not all. How about Rittenhouse?