An article in the School Library Journal, “Educators Weigh In on Summer Reading Lists in SLJ/NCTE Survey”, reports the results of a survey conducted by the magazine and the National Council of Teachers of English among “nearly 100 librarians, classroom teachers, and educators” about which books they wish to remove from schoolchildren’s summer reading lists, and what should replace them. These are the top candidates for the memory hole. 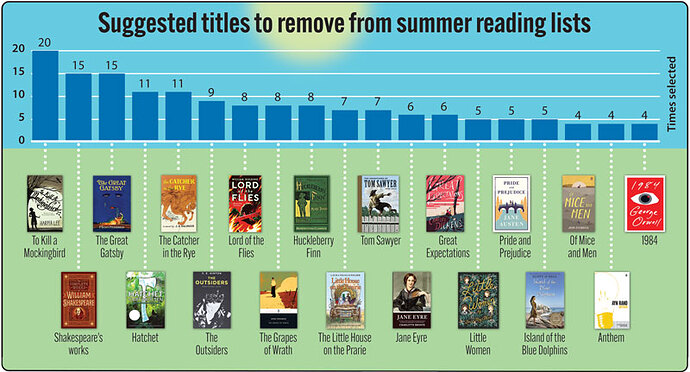 To Kill a Mockingbird and The Great Gatsby were the top books people wanted cut from lists, while favorite titles to add included the graphic novel New Kid by Jerry Craft and the novel The Hate U Give by Angie Thomas. Instead of historical fiction, some respondents suggested science fiction and manga. Many wanted books about more diverse characters, by diverse authors, and others proposed giving students more agency and reading choice. Additionally, respondents noted an availability problem: Old titles can be in low supply in library systems, or be out of print.

“Students cannot relate to some [older books] anymore. I understand that classics should be appreciated, but I think it’s time to allow books published from the 2000s to be given a fair shake,” [“reading support” teacher Larissa] Hinton wrote. “I honestly think we need to revamp the whole idea of summer lists.”

Here are the top suggestions for addition to the lists. I have never heard of any of them. 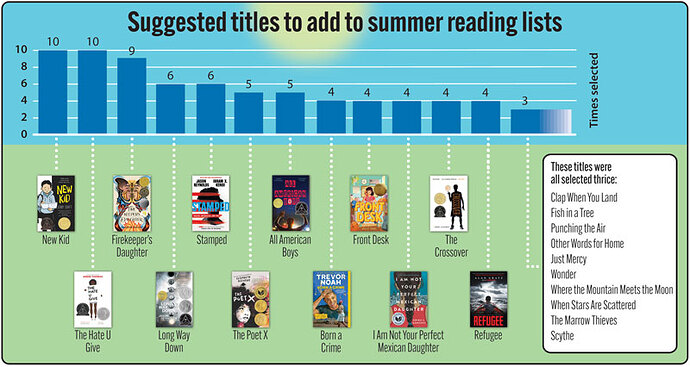 “[Classic] books can be over 200 years old. What else could our teens be learning that they can’t learn from more current books?” says Faith Healy, teen public librarian at the Crest Hill Branch of the White Oak (IL) Library District, who also seeks contemporary titles that could replace classics. Instead of 1984, she suggests Sanctuary by Paola Mendoza and Abby Sher, which follows a young girl and her undocumented immigrant family in a not-so-distant future America where citizens are tracked with a chip. The plot is Orwellian and ‘big brother,’ ” she says, “but also talks about immigration instead in the future, so it’s more fun.”

And summer reading should be fun, she adds. Growing up, Healy loved reading—but loathed required books like The Great Gatsby. The language was difficult, the characters unrelatable, and “trying to write a five-page essay on that was a nightmare.” Healy now collaborates with librarians at local schools to recommend diverse book titles.

Heaven forfend teens should read 1984—they might learn what “memory hole” means. Ray Bradbury famously observed that 451° F is “the temperature at which book paper catches fire, and burns”. I note that “educators” spontaneously combust in an atmosphere of fluorine.

Comrade Healy on why the classics should not be read: “The language was difficult”

Dick & Jane books are difficult for those first learning to read; but the learners persevere and become educated. Is there anything wrong with a student reading a book that occasionally requires her to consult a dictionary? Good Lord! The Great Gatsby is not exactly as stretching as, say, The Federalist Papers – which the student ought to be reading too, to get an idea of what an average newspaper reader could handle less than 300 years ago.

And if “the characters [are] unrelatable”, surely that is great practice for the student in understanding real diversity?

Loved to read what? Comic books. All these years I made the assumption that when a person said they loved to read they meant books above the level of harlequin novels.

Learning the reading level of the citizens of the early republic is the only good use of the Federalist Papers.