Searching for Life in the Clouds of Venus 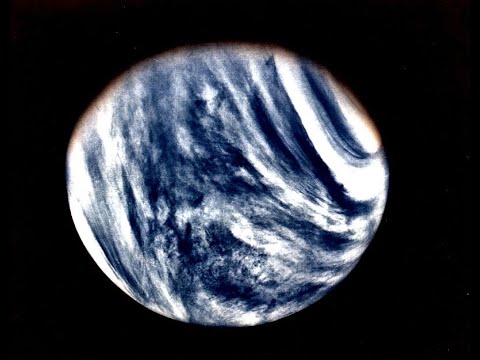 A group at MIT, sponsored by Breakthrough Initiatives, has published the “Venus Life Finder Mission Study” [PDF. 106 pages], detailing evidence that suggests the atmosphere of Venus could, and perhaps does, support a microbial biosphere that accounts for atmospheric anomalies detected both by observations from Earth and by spacecraft exploring the planet. The first exploration may occur as early as 2023:

We have partnered with Rocket Lab to provide the science payload and science team to go with their 2023 Venus Mission’s rocket, cruise spacecraft, and direct probe entry vehicle. The Venus direct entry vehicle aboard Rocket Lab’s Photon spacecraft has room for up to 1 kg of science instrumentation for the short-duration (three minute) descent through the cloud layers. We choose to search for organic molecules in the cloud droplets by an instrument called an autofluorescence nephelometer. This will be the first attempt to search for organic molecules in the Venus atmosphere. The instrument can also constrain the composition of the cloud particles, key to letting us know if the clouds are more habitable than pure concentrated sulfuric acid.

Mission designs are presented for a balloon-based exploration of the atmosphere of Venus and an eventual sample return of around one litre of atmosphere and tens of grams of cloud particles for study on Earth.

The MIT site, “The Search for Life in Venus’ Clouds”, has additional information on the atmosphere of Venus and prospects for exploration.

?Have you noticed all our instruments searching for intelligent life is pointed away from earth.

Way back in the Jurassic era in high school, the chemistry teacher dwelt upon the synthesis of urea back in the Triassic 1800s. This was evidence that molecules associated with organic processes could be synthesized inorganically. Organic chemistry was part of general chemistry, not something unique and different.

Leaves the observer wondering – if organic molecules are detected in the Venusian atmosphere, what will we be able to conclude?

See! You think too much. ?How’s a person suppose to be an ill-informed knumbskull spouting stupid tropes made up by someone else of ill-intent to us, when you apply logic and thought to issues.

Leaves the observer wondering – if organic molecules are detected in the Venusian atmosphere, what will we be able to conclude?

It isn’t just a matter of organic molecules, but rather the more general class of “biomarkers”, which can be complicated and controversial to interpret. To a chemist, an organic compound is simply one containing carbon-hydrogen bonds. One of the simplest of these compounds is methane, which has been detected on every planet in the solar system with an atmosphere and on many larger moons. But this doesn’t mean there’s life there—there are many abiotic processes which produce methane. One of the key signatures of biology is finding an atmosphere which is out of equilibrium—the presence of components which, if they were not rapidly replenished, would have a short lifetime on the geological scale. A distant observer who obtained a spectrogram of Earth’s atmosphere would find it wildly out of equilibrium, with oxygen, ozone, and methane all present in quantities difficult to explain without biological sources replenishing them.

The very limited in situ observations of Venus’s atmosphere hint at some processes there which are out of equilibrium, but there isn’t as yet anywhere enough evidence to rule out abiotic sources.