Second Life Founder Dubious of Prospects for the Metaverse

Axios has published an interview with Second Life founder and CEO from 1999 through 2013 Philip Rosedale, titled “A virtual world pioneer has doubts about the metaverse”.

“I think what we’ve learned — and somewhat with some sadness, given the work that I’ve done, I would have to agree — is that it’s not for everybody, and maybe it’s never for everybody.”

[O]f Meta’s chances of succeeding with their new metaverse project: “Well, I hope they don’t.”

But people, in general, didn’t want to spend long periods of time in it. “I was saying that almost immediately we were all going to be spending television length durations of time or something like that in the virtual world, doing things with people. And that part was definitely not true.”

Just as he experienced with “Second Life,” Rosedale says, "there still arises this weighty question of what is it that’s going to cause, you know, normal people, a lot of the time, to be willing to go into these online spaces?”

“And I think we still haven’t answered that question.”

Companies [are] circling “like vultures about the possible spoils of more of your time, having to go online.”

The Information reports, “The Metaverse Real Estate Boom Turns Into a Bust” (behind paywall).

The metaverse is in the midst of a real estate meltdown. Sales volumes and average prices for virtual land have plunged this year, part of a broader slide in crypto and non-fungible token prices.

Soaring interest in virtual property spawned an industry that mirrors traditional commercial real estate—buyers develop land by adding virtual storefronts, and then sell or rent it to companies looking to set up shop as a marketing strategy or to sell things like clothing for online avatars. Investors who bought at the peak are now sitting on land that has tumbled in value. 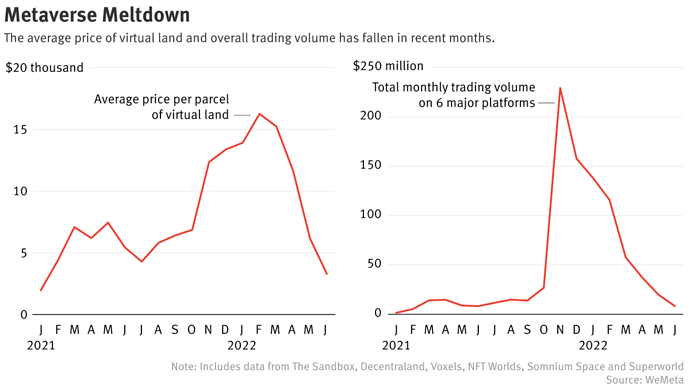 1200×675 47 KB
The “virtual land” sites surveyed (see the light grey type at the bottom right of the graphic) are all scammy-smelling operations most of whom seem to have laughably low numbers of users in their virtual worlds. By contrast, Second Life, which has around a million users and often has on the order of 60,000 people online at once, has had no land price boom or bust over this period, with prices for new private land unchanged and prices for sales of existing property stable.
3 Likes