Sevmorput Bound for Vladivostok on Arctic Route in November 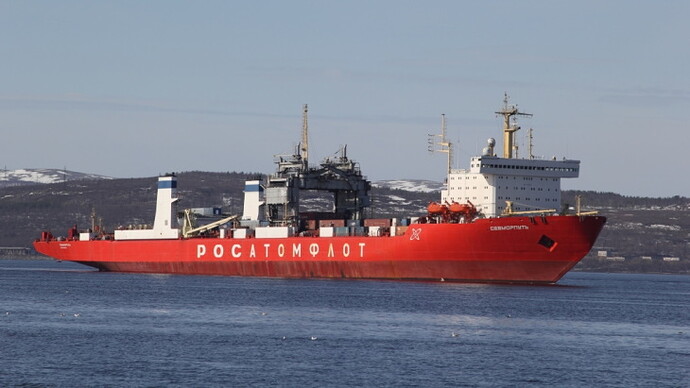 The Maritime Executive reports that “Russia’s Nuclear-Powered Cargo Ship Makes Late-Season Arctic Voyage”. The Sevmorput is the world’s only operating nuclear powered cargo ship and is capable of unescorted voyages through ice as thick as one metre. It is powered by a single KLT-40 reactor with a thermal power of 135 megawatts (the Arktika class nuclear powered icebreakers have two reactors for redundancy) and has a container cargo capacity of 1328 TEUs.

Cargo on this voyage from St Petersburg to Vladivostok is 1400 tonnes of metal components for two VVER-1200 nuclear reactors which Rosatom subsidiary AtomStroyExport is building at Rooppur on the Ganges River in Bangladesh.

Here is a video of Sevmorput operations.

I photographed Sevmorput at her Atomflot base in Murmansk in 2008.

An impressive example of Russian engineering.

We are moving into a new world in which rapidly advancing Bangladesh has nuclear reactors – while declining Germany does not.

Cargo on this voyage from St Petersburg to Vladivostok is 1400 tonnes of metal components for two VVER-1200 nuclear reactors which Rosatom subsidiary AtomStroyExport is building at Rooppur on the Ganges River in Bangladesh.

Highlights Russia’s obsession with its lack of a warm water port.

Would anyone get too upset if I said nuclear powered cargo ships are a solution looking for a problem?

Yes, they are cool and all that, but any steam propulsion plant is very complicated with numerous moving parts. Marine diesels are highly reliable, fuel-efficient (especially paired to a gas turbine run by its exhaust, and don’t have the disposal issues of nuclear plants. My heart is with steam, but my head says fossil fuels works better for this application.

The Sevmorput is unique not just in being nuclear powered, but also being the only cargo ship which is also an icebreaker. It is not an icebreaker in the traditional sense of the Arktika ships, which open paths for ships which follow them, but can operate by itself in waters with up to one metre of solid ice cover. It is rated with the “UL” ice class, the second highest category for merchant ships. It does not have the double hull, twin reactors, or triple electrically-driven screws of the Arktika ships. The autonomy is further reinforced by carrying on-board cranes which allow loading and unloading cargo in primitive ports without their own dockside equipment. It can also carry lighters to transfer cargo to destinations without deep water docking facilities.

The argument for nuclear power is that it allows the ship to operate with autonomy servicing ports along the Northeast Passage (now called the Northern Sea Route) of Russia where there are no refueling facilities for such large ships or carrying so much fuel for itself that it would displace cargo. Also, nuclear power provides the power needed to push its way through the ice (as modern icebreakers do, as opposed to the older ride up and crush through design). Such operation would further increase diesel or turbine fuel consumption.

A random thought on this vessel – there have been significant Russian oil discoveries near the Arctic coast of Siberia, on the Taymyr peninsula. Of course, that is like Diamonds on the Moon – What is it worth, without an economic way of getting it to market?

Perhaps the next generation of that ice-breaking vessel could be a nuclear-powered oil tanker, taking Siberian crude oil round the top to Japan, Korea, and China. Just think of the Greenpeace reaction!