An interesting article about China’s rapidly developing (& competitive) space industry. The world is changing – but the Biden* MalAdministration still seems to think it is in the catbird seat.
China’s 2023 space launches a heads-up for US, Japan – Asia Times

“As part of Washington’s tech war on China, the US last year imposed sanctions on CASC [China Aerospace & Technology Corporation]. But that has not prevented some 50 Long March rocket launches, including six missions to the China Space Station, and the recent success of the [privately-funded] Ceres-1 small satellite launch vehicle.”

Another perspective on how the space industry is changing is given by this table from Jonathan McDowell’s “Space Activities in 2022” [PDF], Table 3, “Commercial vs. government launches” for orbital launch attempts in 2022. 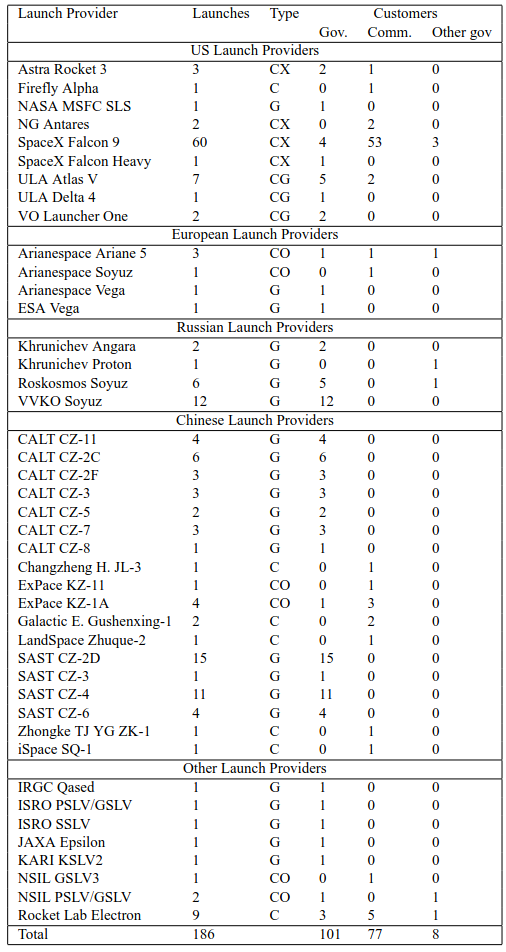 What strikes me about this table is the extent to which you can read it as “SpaceX and Others”. Of a total of 186 orbital launch attempts, SpaceX conducted 61 (33%) and 53 of the 77 commercial launches (69%). The Falcon 9, with 60 launches, was overwhelmingly the most launched vehicle, with Soyuz coming in at 18 and the Chinese CZ-2D at 15. NASA conducted only one launch of its own rocket, the SLS.

All China has to do to win is lobby for more government funding for SpaceX.

Like I was telling people back in the '80s when we were trying to kill Shuttle and (the then still-nascent space station) Fred:

If you’re trying to run a commie space program, you’d better be willing to shoot your corrupt bureaucrats like professional commies.

What strikes me about this table is the extent to which you can read it as “SpaceX and Others”.

Looked at by individual launch providers, SpaceX indeed is head & shoulders above the rest of the field with 61 launches. They are distantly followed by China’s SAST with 31 Launches and China’s CALT with 22 launches. Russia’s VVKO is next with 12 launches, and no-one else managed to break into double figures.

Quite impressive, considering Biden*'s technological sanctions against China & Russia. The world she is a-changing.